Your Karma Reversed Over My Dogma with The Psalms - An Interview 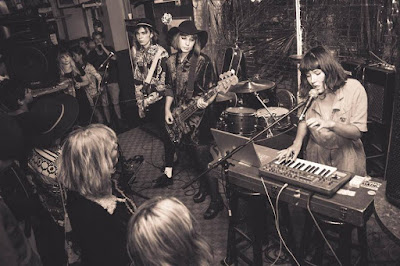 Dê play no alucinante Your Karma Reversed Over My Dogma e seja abduzido. 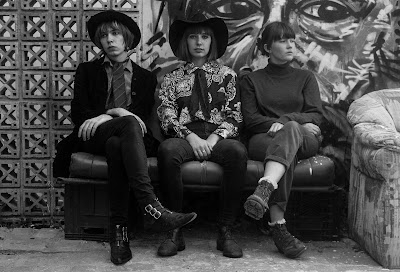 Q. When did The Psalms start? Tell us about the history...
The Psalms started as an idea about a year ago in my bedroom. I play in another band (Changeling) and i wanted to start a new project that i could experiment with. In April last year, Roxy and i released a song called No Pudding but we were more an idea than a band at that point. It was only towards the end of the year that Roxy and I started taking it seriously as an official band. We were then asked to do a showcase by a few local organisers in Cape Town which pushed us to make the band concrete and the concept of the band quickly followed after.

Q: Who are your influences?
Lyrically, i'm influenced by 19th century Romantic writers, I relate to their love for nature and interest in myth and folklore. Musically, i'm mostly influenced by various kinds of 60s music, mostly psychedelic though. I think there's a parallel between psych and Romanticism, the same themes of folklore and interest in eastern cultures. Amon Duul II, early Floyd, The Incredible String Band and The Field Hippies are great examples of that. They were all into that stuff, i think because Romanticism can be pretty far out and a lot of it was also written on drugs. I like trippy things, but i'm also into the darker Edgar Allen Poe side of music; Joy Division and Nick Cave kind of things. Recently I've been listening to a lot of Gospel and Soul too.

Q. Make a list of 5 albums of all time…
Take this list with a pinch of salt...

Q. How do you feel playing live?
Unless it's a terrible show it can be quite meditative for me. You don't think of anything except what you are focused on. it's so concentrated. Sometimes our shows are just one chord for about an hour and that can make me feel really weird. It's great.

Q. How do you describe The Psalms sounds?
If the last few years of my life were a series of opium induced dreams, The Psalms sounds like that. There's a lot of weird stuff going on in there.


Q: Tell us about the process of recording the songs?
I use this kind of old, crappy camera microphone, and thats basically it. I usually start with just an acoustic guitar. I use that as a demo and record the other instruments over it in my bedroom and spend a lot of time piecing it together afterwards. I don't know anything about recording or anything like that so i do everything very naively, but not knowing what you are doing is also very liberating. I also get to work in my room, so i can shut out the world for days and write music in my pajamas, shoegazing with my slippers on.

Q. Which new bands do you recommend?
There are so many, maybe not so new but at the moment I'm listening to a lot of Circulatory System and Morgan Delt. There are also great Cape Town bands; Heroine, Black Lung, Retro Dizzy, Medicine Boy, Kalahrai Surfers to name a few.

Q: Which band would you love to made a cover version of?
Exercise One - Joy Division
Or
I Believe I got Soul - Ray Charles

Q: What are your plans for the future?
Tending to the garden of my subconscious.

Q: Any parting words?
Shout out to my cat, Kitkat back at my parents place in Kommetjie, and thank you for featuring us!
*
*
*
Thanks