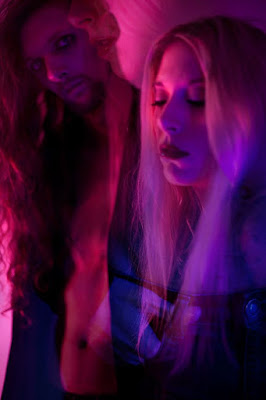 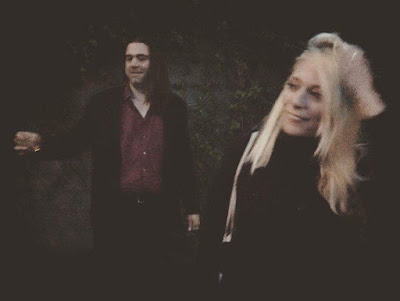 Q. When did Saigon Blue Rain start? Tell us about the history...
Ophelia : Hello, so Franck and I (founding members of the band) like to say that Saigon Blue Rain is a gothic band with hints of color and light in a global dark universe. We started the project at the end of 2012 quite unexpectedly after we composed and wrote a song to the memory of my grandparents who died a few days before. We thought that it was a good cold wave/dream pop track, so we composed a few other things in the wake and that's how our first EP Stupid Bitch Reject was born. Later, our sound turned more ethereal, we've been more precise about what we wanted to create, then we released our first album What I Don't See at the end of 2014. We've done a few gigs to introduce our universe and promote our work. And now, here we are with our second album Noire Psyché recently out in March 2016.

Q. Who are your influences?
Franck : Our influences resides in the 80's music scenes with bands like Depeche Mode, the Cure or Cocteau Twins but are not limited to it. We appreciate lots of music, from folk-rock, hip-hop and jazz to electro, 70's prog and black metal. All of them define the music we make, consciously or unscounsciously.

Q. Make a list of 5 albums of all time…
Franck : Here's a list that comes in my mind at that instant, but if you ask me the question tomorrow I'd give you probably another names.

Ophelia : you know that it's quiet impossible to make such a list, there are so much brilliant albums, but if I had to choose right now, I would say :
Depeche Mode : Playing the angel
Alcest : Ecailles de lune
Anathema : Alternative 4
Nine inch Nails : The downward spiral
Katatonia : Dead end kings

Q. How do you feel playing live?
Ophelia : Our albums need to be played live to exist and it's important for us to feel the osmose with our audience. An invitation to the dream, that's what we want to offer each time we are on stage. If people who came to listen to us has had the feeling to drop out of reality, then they caught the meaning of our musical universe.


Q. How do you descride Saigon Blue Rain Sound ?
Ophelia : We like saying that Saigon Blue Rain is a gothic band with hints of colors and light in a global dark universe. Drawing its personality from subjects such as esotericism, flight of time, forces of Nature or still destructive passions, our music invites the listener through its compositions, to a journey in places where the rational fades in front of the musing and the self abnegation.

Q. Which new bands do you recomend ?
Franck : As we are ourselves a new band, it's hard for us to recommend any new band.

Q. Which band would you love to make a cover version of?
Franck : We've already covered « Goodbye Horses » by Q-Lazzarus. We were talking about covering some french band, but nothing's certain yet.

Q. What are your plans for the future ?
Franck : Touring the more we can to promote « Noire Psyché » and finding partners such as labels and booking agencies.

Q. Any parting words ?
We'd like to thank all the people that have been supporting us since the beginning, especially the South American people that send us lots of encouraging messages. We hope to play there soon !
*
*
*
Thanks