Gloom with Swooning - An Interview 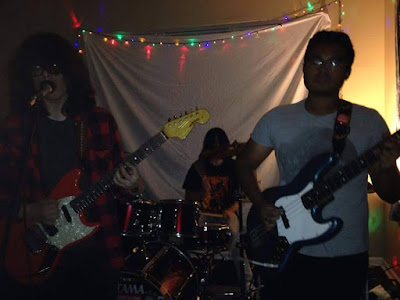 
Q. When did Swooning start? Tell us about the history...

Swooning started last year in January after I started talking and hanging out with a crush that I had. For some odd reason, she made me feel very anxious and I needed an outlet, so I began writing songs about how I felt. The first song was "Pining."

Q: Who are your influences?
My influences with Swooning are based off Beach Fossils, Smashing Pumpkins, American Football, Diiv, Joy Division, Alice In Chains, The Smiths, and Nirvana. Kinda basic, I guess, but I'm really into the dream pop sounds that Diiv and Beach Fossils make and felt that it would be really cool to mix that with punk, emo, and some more technical playing than what dream pop usually does. I want to make something that could be fast and heavy but also soothing and catchy. I'd say it's a pretty weird mix that hasn't been done right yet.

Q. Make a list of 5 albuns of all time…
Since I Left You - The Avalanches
Dirt - Alice in Chains
The Wall - Pink Floyd
Rust in Peace - Megadeth
Sunny Day Real Estate - Diary

Q. How do you feel playing live?
Playing live has been tough. I don't have a consistent drummer, but the drummer's that do help me out are all very good and technical. I really like it, but if it doesn't feel or sound right I tend to feel really bad about my performance. The show is usually heavier live than the recordings are which is on purpose because I want to create a fun punk like energy with dreamy sounds.


Q. How do you describe Swooning sounds?
I would describe my music as dream pop-punk. I feel like the music has the dream pop textures, punk energy, and emo sound that I get from my influences.

Q: Tell us about the process of recording the songs ?
I usually record with my guitarist, Richard,
who goes to school for audio engineering. We usually record on a MacBook straight into an interface and then add a small amount of effects more than what my pedals already do. Drums are tough, but I usually ask people for help who have a place to record with equipment and I then ask a friend to record the drum parts I wrote.

Q. Which new bands do you recommend?
I highly recommend Melkbelly from Chicago, they're one of my favorite local bands. Fatkid is also very good. There are so many different artists from different genres that I like but I'd say to listen to Diiv, Cloud Nothings, and Beach Fossils since they are bands that are current and quality.

Q: Which band would you love to made a cover version of?
I'd love to make a cover of an Avalanches song. I particularly want to cover "Electricity," but it's hard to envision that song in my style.

Q: What are your plans for the future?
I'm planning on growing as much as I can as a guitarist and as a musician. My plans are to write better songs and just keep my head up so that I could experiment more.
*
*
*
Thanks