A Pocketful of Sky with Karma Shake - An Interview 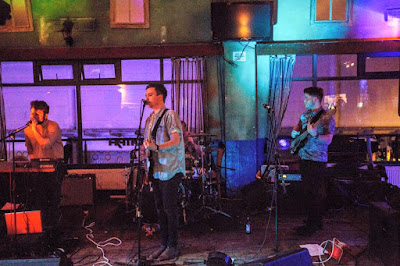 Q. When did Karma Shake start? Tell us about the history...
Karma Shake has been officially going for about a year now. We have been friends since school and have been in various bands through the years. We took some time apart to experience the ‘real world’ but I always continued to write and mess around with ideas. Getting back into it and starting Karma Shake last year felt great and meant we could thrash out the ideas we had stored over the years.

Q: Who are your influences?
Between us we have an eclectic taste in music ranging from soul and funk to psychedelia via blues and rock n roll. This mostly works well because someone can suggest a different dimension to a song during the writing process. It becomes difficult sometimes however to categorise our sound and labelling a genre is tough. But since you asked, as a band we sight influences such as; The Brian Jonestown Massacre, Spiritualized, The Velvet Underground (and Lou Reed), Tame Impala, The Beatles, The Rolling Stones, Primal Scream, The Jesus and Mary Chain, The Charlatans, The Meters, Chapterhouse, Ride.

Q. Make a list of 5 albums of all time…
I think by the time this has published I will have probably changed my mind! Music sounds so different depending on the mood you’re in. But an all-time 5 right now? I’d say:

Q. How do you feel playing live?
The feeling of being locked into a groove with your mates is unparalleled. It’s a drug. I’m always really self-critical directly after the show though, annoying myself with “this could have been better” etc. Love playing the songs you’ve been sweating on for weeks though and finally giving then a life live and seeing people’s reactions to them is cool.


Q. How do you describe Karma Shake sounds?
I’d say psychedelic is a word which is useful when asked tricky questions like this. Psychedelic but not as in 15 minute jamming acid tunes. Psychedelic but with pop sensibility and arrangements. We’re a rock & roll band ultimately but not afraid to experiment with groove beats, electrical equipment or interesting sounds. Shoegaze? Neo-Psychedelica? I’ll go with Japanese Jungle Acid Funk-Pop. (ha!).

Q: Tell us about the process of recording the songs?
Well we spend a good few weeks tweaking a song before we feel we are ready to record. Usually I will come with an idea of the music and lyrics, then me and the lads will pinch the hell out of it to get it done. Then either drop it forever or record it haha. We go to a studio not far from where we live which is owned and run by Simon Jones who was the bassist from The Verve. Recording process is fairly conventional in terms of laying down the beat followed by the instruments separately and then the vocals. We often opt to not record to a click though as if a song is tight enough it can sound more authentic this way and less forced.

Q. Which new bands do you recommend?
We rarely listen to new stuff on the way to practice or gigs! The music that we like is becoming more and more sparse in terms of new bands coming through. Definitely partly due to the sorry state of affairs in the record industry but we won’t get into that now!! Some new stuff comes through though and we like bands such as Tame Impala, Temples, Foxygen, DIIVThe Horrors and TOY.

Q: Which band would you love to made a cover version of?
We rarely play covers at our shows but sometimes throw the odd one in. I dunno its difficult sometimes because you wanna play something that people have heard of but not something obvious or corny. Fuck that let’s play something by The Spice Girls!

Q: What are your plans for the future?
I plan to play up front for Manchester United and score the winner against Liverpool in the FA Cup final! Failing that just keep doing what we’re doing and hopefully generate more excitement and interest through playing tons of gigs over the next year.

Q: Any parting words?
Thanks man top blog keep up the good work! This industry needs people like you!

If you wanna check us out we’re on facebook search ‘Karma Shake’ and our debut E.P. ‘A Pocketful of Sky’ can be streamed or downloaded for free at www.karmashake.bandcamp.com