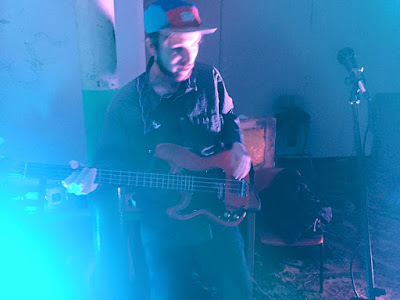 Q. When did Savage Goth start? Tell us about the history...
}Savage Goth started as a solo project, I had an 8 track and a laptop and I started to record some weird music at home. Not much has changed, but now there is 3 of us and we like to play live.

Q: Who are your influences?
I am always really motivated to make music when I listen to or read about people like Daneil Johnston or Wesley Willis. they show you can create art in almost any circumstances. But in terms of musical style, I'm quite stongly influenced by The Smiths, The Cure, Can and Kraftwerk

Q. Make a list of 5 albuns of all time…
This list would be different depending on what time of year/ day of the week you ask me, so in no particular order:
Can - Ege Bamyasi
The Cure - Disintigration
Real Estate - Days
M83 - Saturdays = Youth
The Strokes - Is This It?

Q. How do you feel playing live?
Savage Goth usually has a different vibe live to the stuff we have recorded, we try to make it a bit more energetic so we don't bore the audience! But we call it on the night, sometimes the crowd are feeling the slower stuff.

Q. How do you describe Savage Goth sounds?
Today it's lofi Jangle-Goth Surf-Gaze


Q: Tell us about the process of recording the songs ?
The songs Usually start with 2 interlocking guitar parts, then I like to build up lots of layers, then lots of reverb... on everything. Lyrics are usually last. I usually improvise lyrics over the songs while I'm writing them, if I sing anything that I like I'll write it down.

Q. Which new bands do you recommend?
I'm playing lots of these right now: Kurt Vile, Mac Demarco, Cullen Omori, M83. Probably no suprises there but they are absolutley solid acts mate

Q: Which band would you love to made a cover version of?
We've been messing about with Ceremony by New Order But in Manchester it's not a song you can just drop willy nilly, it's got to be well tight. Ashley used to be tight, but now he's loose

Q: What are your plans for the future?
We are going to record a lot more music and play more gigs where we get free beer. When that dries up I'm going to start a Barry Manilow cover band called Savage Manilow. We are going to play Manilow songs in the style of Slayer

Q: Any parting words?
Thanks for taking an interest in Savage Goth, please buy our EP
*
*
*
Thanks