Tranquil Day with The Suncharms - An Interview 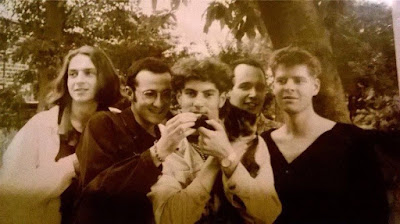 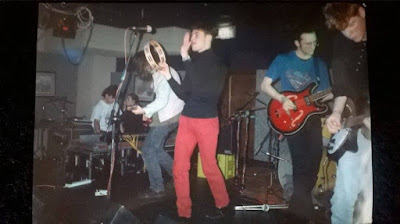 Q. When did The Suncharms start? Tell us about the story...
The Suncharms are Marcus ( Vocals/Tambourine ) Matt ( Guitar ) John ( Guitar ) Richard ( Bass ) and Chris ( Drums ) Our first band came together in 1989 and was a heavily Pastels influenced outfit called The Eunuchs - it was effectively The Suncharms but with a different guitarist.

We soon tired of the name and once the original guitar player left we brought in John on lead guitar and decided to also change the name.

Initially we kept a mix of old Eunuchs songs and newer Suncharms material in our live set but over time the newer songs started to move away from indie-pop and head in a more distorted yet still melodic sound -the only remaining Eunuchs song which you can hear on our compilation CD is ''Verge Of Tears'' which still has a Pastels ''Baby Honey'' feel I think.

There were a few bands emerging around this time doing something similar and once journalsits took notice they had to give it a 'scene' name so without much thought I suppose it was soon known as shoegaze!

Q. What are your influences?
We do have a wide range of influences - obviously five people can't all have exactly the same tastes but on the whole we initially found some common ground with bands such as Pale Saints, My Bloody Valentine, Ultra Vivid Scene, The House Of Love, Galaxie 500, The Jesus And Mary Chain, Teenage Fanclub etc.

As for current influences I think it might be too early to say as we've only just had our first rehearsal for 23 years!


Q. How do you describe The Suncharms´ sounds?
Melodic indie/shoegaze with plenty of guitar hooks. We do have distortion but never to the point of obscuring the song or melody. One of the common criticisms aimed at shoegaze is that the vocals are pushed too far into the background but I think most bands of this genre would agree that the vocals form part of the overall mood and atmosphere.

We'd never want the lyrics to be completely obscured though- especially as our singer Marcus has a great way with words! On some songs he also uses a tambourine which adds a nice extra shimmer to the overall sound.

Q. Make a list of 5 albums of all time.
Is this a trick question? - ;-) It's almost impossible to decide - I'd struggle to choose only 25 let alone 5! - I know each of the band have their different all time favourites - Matt for example loves The Cure's ''Disintegration'' and Dinosaur Jr's ''Green Mind''

Marcus and myself are huge fans of McCarthy's ''I Am A Wallet'' amongst many others but I'll give it a go by focusing on five albums which are long standing favourites and which were a direct influence on me personally during The Suncharms initial period of activity:-

From this era I'd also like to mention the Swedish band Easy and their album ''Magic Seed'' which is just wonderful - every time I listen to it I do hear a lot of Suncharms style sounds so I guess they were also an influence.


Q. What represented Shoegaze classic era for you?
The classic era for me begins with ''Psychocandy'' in 1985 and probably ends with ''Loveless'' in 1991 but it was My Bloody Valentine's 1988 release ''You Made Me Realise'' EP which really opened my ears to shoegaze - every track on it is superb. Of course their earlier stuff was heading in that direction but I guess it would still really be categorised as jangle-pop but with this EP I think they blew the doors open for more bands to start experimenting with melodic distortion.

Another hugely influencial EP was The Pale Saints ''Barging Into The Presence Of God'' featuring ''Sight Of You''.

An important proto-shoegaze album for me was the 14 Iced Bears debut which never seems to get enough attention but just listen to songs like ''Mother Sleep'', ''Surfacer'' or ''Holland'' and you'll see it's shoegaze through and through!.

Q. How were the shows at the early years of The Suncharms? How do you feel playing live?
The early gigs were mostly as support act to bigger names in the indie-pop and shoegaze world - we supported The Brilliant Corners, The Television Personalities, Catherine Wheel, Curve and Cranes amongst others but as our confidence grew we started to arrange our own events and pull in larger crowds.

Usually we would play in our home town of Sheffield at The leadmill or The Hallamshire Hotel but also played in London, Norwich, Bradford, Bristol and elsewhere on the tour circuit.

It's a long time ago now to remember in detail but I recall we were pretty tight live and the gigs were a mixture of nervous energy and enthusiasm.

Q. The Suncharms are active again. What´s the reason for the return?
The initial reason was our new compilation on Cloudberry Records. I was contacted by the label owner Roque ( a Peruvian indie obsessive based in New York! ) and he was keen to compile our long deleted two EPs - both released in 1991 - plus any unreleased recordings.

We were obviously thrilled to get the chance to reissue our music so we all met up in early 2015 to discuss plans and collect together old photos, flyers, posters etc to make the CD booklet.

Within minutes it was clear that we all still had a real passion for the music and talk quickly turned to whether it would be a good idea or not to have a practice and to see if we could still play the songs.

It took the best part of a year to compile the recordings, have them remastered and sent to Roque to compile the CD and once the CD was released in March this year we could concentrate on playing again.

Matt and Chris had been writing new songs over the previous months so before we knew it we'd suddenly got brand new material to focus on.

We met up for our first practice since 1993 the other week and it went really well so we're looking forward to doing some more very soon.

Q. Which new bands do you recommend?
Once again I can't speak for all of The Suncharms but for me personally I've recently been enjoying The Rightovers - ''Blue Blood'' album which is fantastic plus great albums by Chorus Girl, Joanna Gruesome, Eastern Hollows, Younghusband, Knife Pleats, Girls Names ( ''The New Life'' is a modern masterpiece! ), Big Troubles, Bored Nothing ( check out their song ''Bliss'' - amazing! ) and there's also some great young American shoegaze bands such as Wildhoney and please check out a young US band called Astragal - their song ''Urchins'' is stunningly good.

Q: Which band would you love to make a cover version of?
We've never bothered with cover versions and to be honest I don't think we ever would but I think if we did I'd choose Pale Saints ''Sight Of You'' as it was very influencial to us when we started out and I already know how to play the bass line! ;-)


Q. What are your plans for the future?
Our immediate plans are to keep meeting up as often as possible to write and rehearse new songs then I'd like to think we could choose the best few songs to release on either a 7" or a 12" EP - perhaps even one day we might write enough material to see The Suncharms first official debut album! - that's certainly a dream to cling to.

As for playing live there are no immediate plans but once we've got a new release in the pipeline then it would be great to get out there for a gig or two.

Q. Any parting words?
Thanks again for getting in touch and to anyone out there curious to hear more about the band please like and follow our facebook page https://www.facebook.com/thesuncharms/ and better yet buy the compilation CD from Cloudberry Records, Discogs, Jigsaw Records or Rough Trade.
We're really happy with the CD and it feels like it's drawn a line in the sand on the first phase of the band - all our original recordings are on there including previously unreleased demos and there's a full potted history of the band in the sleeve notes with lots of archive images.

Now that the CD is available we feel we can move on to creating more new music and concentrate on the future.