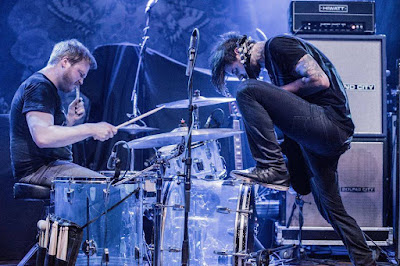 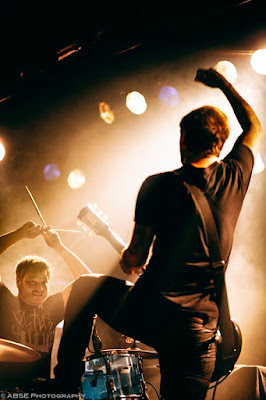 Q. When did Closet Disco Queen start? Tell us about the history...
Jona: Back in june 2014, we organized this pop-up festival in our rehearsal room. Every band had to play 20 minutes. We were missing an artist for one slot. Luc (drums) and I (guitar) decided to do it and jam around a couple of riffs and we used the moniker CLOSET DISCO QUEEN. After that we played a couple of shows here and there until march 2015 when amercian proggers The Atlas Moth offered us to tour with them in Europe. Until that point we were not a band but since we were about to go on tour we had two weeks to write, record and send our album to the pressing plant. So we did it. We even eneded up organizing the tour for both bands until they actually canceled the whole thing 10 days prior the tour. Unfortunately it was too late and we were a band with an album. This whole thing was basically an accident. Now over the last 10 months we’ve played 3 european tours including a direct support for Baroness as well as a Russian tour in last october.

Q: Who are your influences?
Jona:I honestly cannot answer this one. However, I can tell you that we’ve been and still are getting inspiration from hundreds of other bands and people we’ve met (or not) through the years. This can go as far as from Heads and their huge bass sound to Jimi Hendrix’s soulfull playing.

Q. Make a list of 5 albuns of all time…
Jona:Only talking personal here and not for the band.
Nirvana - Unplugged in New York
Silverchair - Neon Ball Room
Deftones - White Pony
The Dillinger Escape Plan - Calculating Infinity
Converge - You Fail Me

Q. How do you feel playing live?
Jona:hum…Very good. That’s pretty much what we’ve done full time for the last 8 years through different bands. Feels like the right thing to do for us.

Q. How do you describe Closet Disco Queen sounds?
Jona:As our press release states : "70's instrumental psycheledic kraut rock'n'roll progressive beats for your ass to shake and your shoes to burn." Someone also once wrote that it sounded like « Jimi Hendrix on Amphetamine ». Accurate enough for us.


Q: Tell us about the process of recording the songs ?
Jona:We rented a music club for 2 days. on day one we setup the instruments and microphones and on day two we recorded the album live. Generally we don’t do more than 4-5 takes per song before having one we’re happy with. After every take we listen to it and we can instantly say whether we’re gonna keep it or not. We don’t mind the mistakes or tempi changes (we never record to a click), but it needs to have attitude and balls.

Q. Which new bands do you recommend?
Jona:No idea. To whom? I discover bands all the time but I’m not sure which ones are new or not. For sure, if you’ve never heard of them you should check out Breach and Cursed. Young Widows might be a more recent one you want to check. I also really enjoy Goat, Metz, Blues Pills, Suuns, Earthless…

Q: Which band would you love to made a cover version of?
Jona:I would love to cover « lunchbox » from Marylin Manson.

Q: What are your plans for the future?
Jona: Playing a couple of off shows until summer festivals and then we will tour China and Russia in september and october and a full european headlining tour in november.

Q: Any parting words?
Jona: Thanks for checking us out. Visit www.hummus-records.com to discover many great swiss underground bands from lo-fi folk to experimental drone shit. Like Crazysane records, they’re awesome.
*
*
*
Thanks