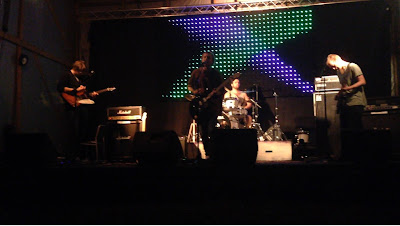 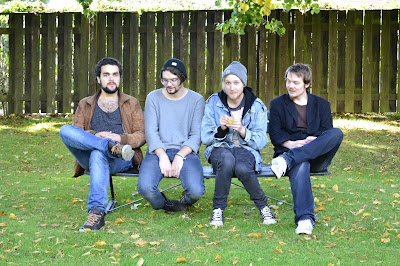 Q. When did Ikiryo start? Tell us about the history...
We started in 2013 when Jonas joined the band. Me (Dante) and Victor had already played together in the band that was the precursor to what would become Ikiryo, so when we all came together was when the sound of the band started to solidify. Pontus joined us a year or so later when we realised we needed another guitarplayer in the band.

Q: Who are your influences?
We have very eclectic tastes in music, but some shared loves are: Deftones, the mars volta, radiohead, aphex twin... and so on

Q. How do you feel playing live?
Dante: I feel like I need to tear of my flesh, it's a beautiful blend of an intense self-loathing and complete euphoria

Victor: Playing live is a completely different thing than playing in a studio. Within the walls of a studio composing and playing an instrument tend to become a very clinical exercise, while playing live is in a sense more genuine because the audience gets to see both your flaws but also spontaneus variation in the songs. I appreciate this aspect of playing music because it seems to have a natural resonance with how are ordinary lives are and how we operate. In conversations for example we tend to imagine what we´re suppose to say, but it comes out in different way and sometimes we convey a message even though we haven´t said anything. These analogies seem pretty apparent when it comes to music.

Pontus: What I find interesting and compelling about playing live is really the non musical performance. Creating a visceral experience on stage that lifts the music beyond playing my instruments well. It ultimately comes down to a lot of preperations, and an amount of work that isn't always possible, but often worth the effort when you get it right.

Q. How do you describe Ikiryo´s sounds?
A euphoric nimbus-cloud of whispers and the last throes of summer


Q: Tell us about the process of recording the songs ?
For our debut album we recorded the drums in a local studio and then we recorded the rest of the tracks in our rehearsal space. Jonas mixed the entire record in his home. In the end we payed for the record with nothing but our time

Q. Which new bands do you recommend?
Nisennenmondai is a great Japanese band, they used to play noise rock but now they're doing some kind of trance-but-with-instruments.

Q: Which band would you love to made a cover version of?
We have a couple of ones we've talked about; mixomatosis by radiohead, sunflower meadow by melina borglowe, let go by frou frou. We're not really the kind of band who does covers, but we'll see.

Q: What are your plans for the future?
We are soon to release our debut album "Asleep/Awake" and later this may we're going to Croatia for a small tour.

Then when we come home we're going to start recording our next album, and some videos for the debut is also in the making, so it's going to be a busy summer for us.

Q: Any parting words?
[wedoittoourselves]
*
*
*
Thanks