Through The Lychgates with Lake Ruth - An Interview 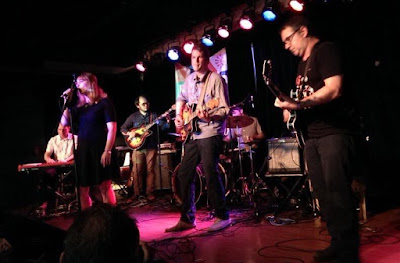 Um requinte acima do que encontramos diariamente transborda no single "Through The Lychgates" e também no anterior "The Inconsolable Jean​-​Claude".

Q. When did Lake Ruth start? Tell us about the history...
HC: I met Allison when I had recalled her name from one of my favourite groups from the Myspace days, The Silver Abduction. We were both chatting about trivialities on Phil Sutton's (Pale Lights) Facebook page. I was trying to defend the honour of this particular kind of TV dinner marvel of modern technology, the "Iceland Supermarkets Tikka Masala Yorkshire Pudding." I asked her what she was up to, and she mentioned she had been recording these new tunes, really creepy songs about the restless ghost of a medieval mother, swearing to avenge her daughter's murder, and another song about a woman who is impregnated by a shape-shifting seal-man.

Along the way we started talking about the Victorian physician John Snow, his work and the rise of epidemiology, and realised that we needed to form a band. The timing was pretty perfect since, in the meanwhile, Matt (whom I work with on another project, The New Lines) had me over to "jam" and every now and then. I would ask him to just play the drums to an imaginary song in his head. So we had all of these complete drum grooves lying around: verses, choruses, big ending vamps. The epidemiology song (Dr Snow And The Broad Street Pump) and the mother-daughter ghost story (Yet Still Tomorrow Comes) both appear on our soon-to-be-released LP!

Q: Who are your influences?
HC: The Shirley Collins / Davy Graham "Folk Roots, New Routes" album, Delia Derbyshire, Margo Guryan, Basil Kirchin. A bit of Fela Kuti and krautrock find their way into the mix too. More recently I have been carefully nurturing a mildly embarrassing love affair with Fotheringay's 'Too Much Of Nothing'. Whether that influence will be wielded for good or for evil remains to be determined!

AB: Edda Dell'Orso, Jacqui McShee, Jimmy Scott, Yma Sumac, Elizabeth Fraser, Phyllis Dillon. In recent years, I've become quite obsessed with the Croatian-American jazz vocalist Helen Merrill, especially her 1960's collaborations with Sandro Brugnolini. Kate Bush is a big influence, though maybe in more of a songwriting than a vocal capacity as I'm not nearly so experimental - but I think I developed my love of dark, character-focused songs heavy with supernatural surrealism from her for sure.

And since this is for Brazilian readers, let me go ahead and say Clarice Lispector, my favourite writer of all time. Unfortunately I can't read her in Portuguese - I really should have a better grasp, given the number of classic Brazilian records in my collection - Os Mutantes, Rita Lee, Gal Costa, Baden Powell, Tamba Trio, Nara Leao, Sylvia Telles, Quarteto Em Cy - lots of Elenco releases. However, I think the musicality and uniqueness of her voice comes across well, even in translation. Her work has certainly had an enormous impact on me. We've actually written a tune about her parents, Ukrainian Jews who fled the horrors of post World War I pogroms to find refuge in Recife. That tune didn't make the cut for this album, but will hopefully be on the next one.

Q. Make a list of 5 albums of all time…
HC: The Pretty Things 'S.F. Sorrow' and Pink Floyd's "The Piper At The Gates Of Dawn" are both at the top of my list at the moment.

AB: To round that out I'd have to say the one and only self-titled LP by The United States Of America - so influential.

Q. How do you feel playing live?
H: We'll have to let you know after we do our first ever show on May 22, 2016 at NYC Popfest! I think it will be the first time I will have ever attempted to perform a song in 7/8.

Q: Tell us about the process of recording the songs ?
HC: Sometimes the songs start with nuggets from Allison, Matt or me, like a particular kind of drum cadence, a snippet of melody, or even just an idea for the subject matter. Currently on one of the contemplation tables is this curiously weighty sentence that Allison's young daughter Rosetta dropped some time ago regarding one of her friends: "If I throw rocks at her door, maybe she'll come back…"

Q. Which new bands do you recommend?
AB: Let us take this opportunity to big up some labelmates from The Great Pop Supplement / Deep Distance / Polytechnic Youth: Listening Center, Rhododendron, The Hanging Stars, Youth Of America. Great sounds and highly varied. Seriously enjoying the new 'Void Beats / Invocation Trex' from Cavern Of Anti-Matter as well.

Q: Which band would you love to made a cover version of?
MS: The Shaggs.

HC: We have been munching on the Scottish folk song, 'Tam Lin' by Fairport Convention. It is a crazy tale about some sort of ex-knight who is under the spell of a Fairy Queen and a prisoner in her court. Bored with that, he decides to wile away his time romancing ladies that pass through the forest. At some point he meets the song's heroine, a witchy girl called Janet, who gets pregnant and decides to rescue him, which she does on Halloween night.

AB: I've wanted to cover 'Nature Boy' by eden ahbez for years. I really love the James Brown version in 6/8 so that would probably be my starting point...

Q: What are your plans for the future?
MS: Eating lunch.

HC: We're really excited to see what people think of our new LP. It's going have a special liner insert loaded with puzzling clues as to each song's particular mysteries, written by a super-talented author and expert on psychogeography.

Q: Any parting words?
MS: Take pride in your work and don't be an asshole, one of these is easier for me than the other...

AB: Just want to say thanks for taking the time to chat with us and spread the word about our music. We really appreciate it and are very excited to be reaching a Brazilian audience.
*
*
*
Thanks