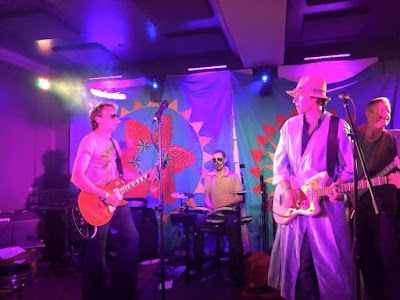 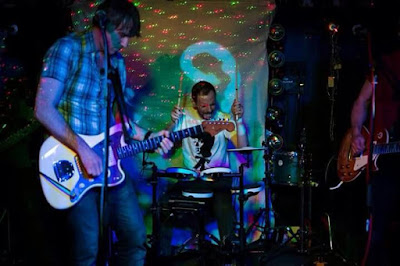 Q. When did Psychic Lemon start? Tell us about the history...
Andy H and George used to play together in a different band. In 2013, that band moved towards performing conventional material, so Andy H and George decided to take another route -- they wanted to create, to make something new and original. They brought in Andy B, who had produced some tracks for them in the past, and then advertised for a drummer -- for auditions on a boat. Martin turned up, and carried his drums a quarter of a mile to reach the boat. That was the first meeting of all four members of Psychic Lemon. Over the winter of 2013/4, Andy H built the Psychic Studio, a soundproof studio for the band, from the ground up. Their first rehearsal was in February 2014, and their first gig was in October 2014, on the same boat where they first met: Fate can be an interesting thing.

Q: Who are your influences?
Andy B:Orchestre Poly-Rythmo, Can

Q. Make a list of 3 albums of all time…
The Velvet Underground with Nico
Tago Mago by Can
Illinois by Sufjan Stevens

Q. How do you feel playing live?
It’s great to perform something that started as a simple jam, which you have refined over and over, until it’s perfect, like carefully carving a statue. And it’s great to contribute to a sound and experience that’s impossible for one person alone to create -- each of us makes our own contribution, and the combined result is something unique.


Q. How do you describe Psychic Lemon sounds?
We have been described in a lot of different ways -- psych, funk, krautrock, prog -- but the term we prefer is krautfunk.

Q: Tell us about the process of recording the songs?
Our songs emerge from jamming: Between rehearsing existing songs, someone will often start playing a new riff or idea they have, and we’ll all join in one by one and just have some fun. Twenty or thirty minutes later, we often have the basis for a new song. Our best ideas come from playing together like this, so we try to record everything to listen back to later. Most of our time is spent refining these ideas into something solid -- jamming together and pushing together these new ideas is the easy part! For the actual recordings, Andy B records us all together initially, for a guide track. Then we put down drums, bass, guitar, vocals in the usual order. This all happens in the Psychic Studio, over a number of weeks. Andy B then takes the recordings home and sprinkles his magic dust on them.

Q: What are your plans for the future?
This summer: Release our album on lemon yellow vinyl through Drone Rock Records. After that? Just keep jamming.