These Minds with Sun Colony - An Interview 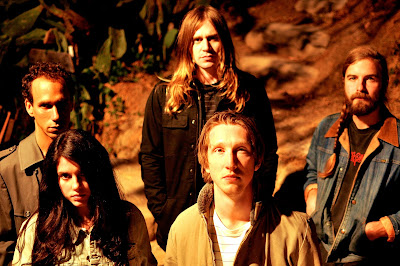 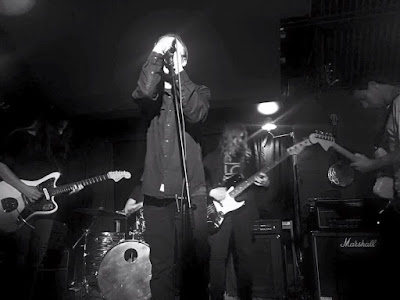 Q. When did Sun Colony start? Tell us about the history…
It originally began with just the two of us (Derek and I), as a recording project in 2012. We had just moved from New York to California. We were no longer doing our other projects -- he had been playing in Soren Well and I had just left the Stargazer Lilies. When we found a sound together, we invited Quinn, our longtime friend, to play bass with us. Ola, the drummer, showed up like a dream -- we live in a tiny mountain town outside of LA…. what are the chances?. Vocalist, Tommy, former member of Gun Runner and Dark Thirty, was the last addition. His sound and energy got us out of the bedroom and the missing link.

Q: Who are your influences?
I'm pretty much a freak over Wire, Siouxsie, the Jesus and Mary Chain, early Mute records stuff (especially Fad Gadget). Derek loves Echo and the Bunnymen and King Tubby. Ola is really into classic punk, but his style of playing is influenced by so much more. Quinn is into groups like Killing Joke, the Chameleons, Love and Rockets... Tommy digs Primal Scream, BRMC, and tons of other great stuff. We were all born in the 80's, so the dreamy / dark / loud analog sounds are what seem to catch our attention.

Q. How do you feel playing live?
We don't know yet… our first show together is May 27th in Topanga Canyon, Los Angeles.


Q. How do you describe Sun Colony sounds?
Dark and bright, lazy and hostile, dreamy and shocking…

Q: Tell us about the process of recording the songs ?
So far all of the recordings have come from our living room. Derek used to have a studio in Brooklyn (called Honeyland) so he still has a ton of gear from that. We usually record live drums and bass first. Then Derek and I spend a ton of time recording our guitars, become totally satisfied but end up recording them all over again the next day...

Q. Which new bands do you recommend?
Our east coast buddies, Spirit System, are pretty awesome. And definitely check out the new Stargazer Lilies stuff.

Q: Which band would you love to made a cover version of?
We are currently working on a cover of "See My Friends" by the Kinks.

Q: What are your plans for the future?
We will keep developing our sound and making new songs. I have been making my own (analog) pedals recently, so hopefully those will be a part of it as well.

Q: Any parting words?
Not really… but thank you for having us.
*
*
*
Thanks