The Light with Monographic - An Interview 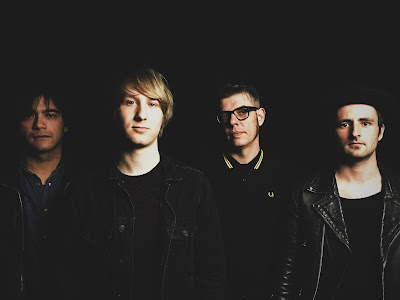 
Q. When did Monographic start? Tell us about the history...
The current line-up started playing together by late 2014. Until then, Björn, Ric and Lothar played with another drummer who got replaced by Moids. We gave the band the name "Monographic" and the rest is history.

Q: Who are your influences?
Ufff, that´s a tough one... We have thousands of influences in our music; punk, post-punk, brit-pop, 60's, garage, shoegaze, psychedelic... We don´t really think too much about it. We know each other´s influences and respect them because all of them are really tasteful and so far they are cohabiting really well in this mixer that Monographic is. But if you want a name which we all agree with; Iggy Pop (from The Stooges to his latest band with Josh Homme)

Q. Make a list of 5 albuns of all time…
- The Stooges "Raw Power"
- David Bowie "Ziggy Stardust"
-The Jesus and Mary Chain "Psycho Candy"
- The Smiths "Hatfull of Hollow"
- Rebel Motorcycle Club "Take Them, On Your Own"

Q. How do you feel playing live?
Comfortable, really comfortable... We love playing live especially when the audience is smiling and headbanging at least a little bit.

Audiences need to realize that a concert is not only a band entertaining them, it is a communion of the souls of everyone involved in the gig. The more warmth a band feels the better the band is gonna perform.

And yes, this is a claim applicable to every kind of concert.

Q. How do you describe Monographic sounds?
Like the Hiroshima bomb landing into the Versailles palace in 1750 while the Royal Family is having tea.


Q: Tell us about the process of recording the songs ?
Normally is Björn or Ric who come with an idea, we jam through it adding/arranging parts and then we record a demo of it that we listen one million times. After we feel the song is 100% ours we keep it but if we don´t feel 100% into it, we discard it.

Our soon-to-be-released first album was recorded on December 2015 at Brazil Studios in Madrid (Spain). We went totally analog and we couldn´t be happier with the result.

Q. Which new bands do you recommend?
Strato from Hamburg

Q: Which band would you love to made a cover version of?
We spoke of covering The Police or Bowie in the past but we just don´t see how.

Q: What are your plans for the future?
A lot!!! First of all a video single of "The Light" is coming out next week, then on June 10th the 12" of the album is coming out on Manic Depression records from Paris and Cat On The Howling Moon records from Glasgow, it will also come out on every digital platform. After that on June 17th we are organizing the release concert party together with our friends from Strato, we both will present our releases on that date. Then we will play Berlin in July and by september/october we are organizing our first european/UK tour.

So yes, we are quite busy and fucking excited at the moment.

Q: Any parting words?
Do your own shit, don't wait for others to help you. A band is worth what each member of the band can do for it.