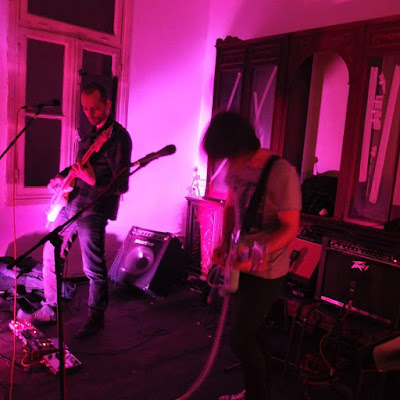 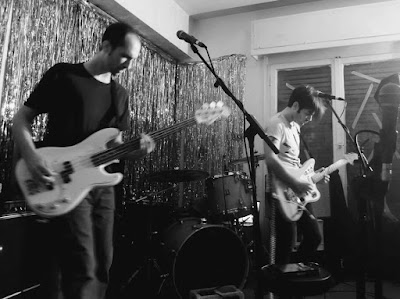 Q. When did Acid Barretts start? Tell us about the history...
Harry: Antonis and I used to be in a band in high school with some other folks, but because we studied in different cities during our college days, that project ended in 2008. In late 2012 Antonis returned to Athens, so I asked him if he’d be interested to play bass in the band (at that time I had done a couple of shows by myself and with the help of another friend). He accepted and we started jamming together and playing some gigs with an old EKO drum machine. After a show in 2013, almost all of our gear was stolen. We slowly started getting new stuff and tried some drummers for our next shows, but without a drum machine the sound was just not the same. Finally, we found a drum machine that would do the job and in 2014 we started performing again.

Q. Who are your influences?
H: Starting from the 60s, it’s impossible not to mention the Velvet Underground. They fused noise, drones and pop music in such a unique and interesting way, listening to their first album for the first time is a life changing experience. The krautrock genre in the 70s and bands like Neu! are also very dear to us. From the 80s, we love Jesus and Mary Chain, My Bloody Valentine and Spacemen 3. Bands and songs that focus on repetition or have a roaring guitar sound make a stand and will always move us.

Q. Make a list of 5 albuns of all time…
Antonis: It’s very hard to answer this question without being brutally unfair. This is my best shot:
1. Abbey Road – The Beatles
2. Low – David Bowie
3. Faust - Faust
4. Subnarcotic – 39 Clocks
5. Sound of Confusion – Spacemen 3

Q. How do you feel playing live?
A: Honestly, every time we‘ve played live has been a beautiful and unique experience. There are many emotions involved when playing live: Enthusiasm, anxiety, impatience, fury are just some of them. Exposure, while it may cause self-consciousness, sometimes becomes the catalyst in order to be fully expressive and let it all out during a gig. This is absolutely great when it happens. Achieving honest and subtle communication with the audience is always vital.

Q. How do you describe Acid Barretts sounds?
A: Sometimes aggressive and “hands-on”, sometimes detached, cold, dark or even dreamy. From day one, there was a definite tendency for making noise, using feedback and “loving the fuzz”; so, noise became an important element for us and usually there’s a lot of it between songs when we play live. Loud distorted noise, at the right place and time, can be cathartic, creating a powerful feeling of redemption, which I think is something we’re trying to create. At the same time, our sound, especially the rhythm section, could be described as minimalistic. There is a clear minimalistic approach in our frequently monotonous and repetitive drum tracks, motorick bass-lines and relatively simple song structure.


Q. Tell us about the process of recording the songs?
H: When we’re writing a new song, we try to approach it as if playing it live would be the final result recorded on tape. There are only two guys in the band and the only prerecorded thing we use are the drum machines, so it’s really important to make it sound as massive as possible. It would be ideal to just enter the studio, lay down the track and finish it in one take. Of course that’s not always the case, because when you are working in the studio you can really get lost trying to add things or experimenting.

Q. Which new bands do you recommend?
A: There are many interesting and talented new bands and artists nowadays, but I believe we could both agree that The Janitors, The Mushroom Club, The KVB, Static Daydream and Sonic Jesus really stand out.

Q. Which band would you love to made a cover version of?
H: Anything by Skywave. Especially “Got that Feeling”. The Offering did a really great job covering this.

Q. What are your plans for the future?
H: We are currently uploading a new song on our soundcloud profile every month and at the same time we are recording some new tracks. All these songs will form our first two EPs which hopefully will be physically released some time in 2017 on cassette.