Numbers with Nightblonde - An Interview 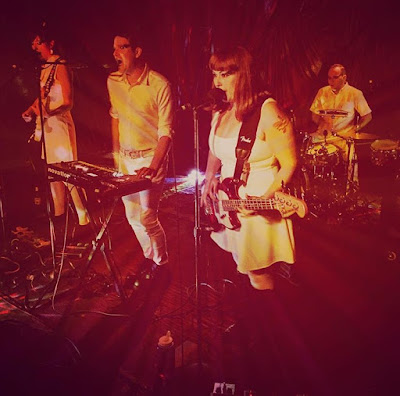 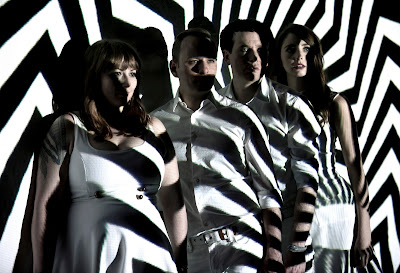 Q. When did Nightblonde start? Tell us about the history…
Megan and I were in a glam punk band, and when that ended we decided we wanted to make an entirely different kind of music. Something beautiful, but powerful. Like a rocket ship. Less words, longer songs, more mystery. We asked Jill to join us, and then Jill recruited Ben, and the line-up was complete. It’s been a complete dream ever since.

Q: Who are your influences?
Lyrically, we are fascinated with 20th century authors who wrote about the future as they saw it, usually a warning for society to change its ways before the world destroys itself. And I don’t know if anyone really listened. Writers like Ray Bradbury, Anthony Burgess, Aldous Huxley, George Orwell, many others — they foresaw things that have become reality for us today. Surveillance, genetic testing, reliance on technology, basic human rights being threatened, the list goes on. Looking at the future through the lens of the past is a big theme for us.

Musically, the songwriting of Slowdive and My Bloody Valentine; you could strip away the effects and you still have very well crafted songs. We love the hypnotic repetition of Neu!, which went on to be furthered by Stereolab. We are very moved by the harmonies of lots of 1960’s groups, The Free Design, Mamas and The Papas, The Byrds, Crosby Stills, Nash and Young. I also love incorporating strange sounds into the songs, very Radiophonic Workshop or like the French band Air would always do. And we adore reverb and delay.

But design and image are also such an important part of what we do. It is important for us to have a uniform look on stage. Megan works very hard to have all our publicity threaded with a specific Orwellian voice. And Jill came up with the cover art for our debut record Numbers using dots and dashes from Morse code which ended up having a very striking Factory Records / Peter Saville look to it.


Q. Make a list of 5 albums of all time…
The Nightblonde sound is best represented by these records which we play endlessly:

Q. How do you feel playing live?
Oh it’s heavenly performing the songs, always such a thrill.

Q. How do you describe Nightblonde sounds?
We are the band the fireman’s wife from Fahrenheit 451 would watch perform on her TV walls as she drifts into a haze from taking too many pills.

Q: Tell us about the process of recording the songs ?
We were recorded by Jeremi Morris in a house in the Green Hills area of Nashville. We put the songs together, piece by piece, and had fun coming up with new sounds to add to songs we already knew so well. Ben especially enjoyed trying lots of percussive ideas. He brought twelve different tambourines into the studio one day.

Q. Which new bands do you recommend?
I honestly don’t care for too many new groups, I find most of them very ordinary and lackluster. But there are a few bands in Nashville who seem to be expanding on the basic idea of the pop song and what pop music can do, and it’s very exciting. Bands such as Wildfront (https://wildfront.bandcamp.com), and two bands who are performing with us for our record release show in June, Soft Bodies (https://softbodiesmusic.bandcamp.com) and PANGS (http://pangsband.com/).


Q: Which band would you love to made a cover version of?
We would enjoying turning all the songs from the classic film The Room into 10 minute long krautrock anthems. Having said that, we are recording a Cure song later this year for a tribute record that a great guy in Nashville called Heath is putting together.

Q: What are your plans for the future?
Our debut record is coming out in June on a label called yk records, the brainchild of Michael Eades, one of the most passionate music lovers I have ever met. And we are thrilled to be playing the triumphant return of the Athens Popfest in August.

Q: Any parting words?
More reverb and delay, please.
*
*
*
Thanks