Nothing is Real with Shirley & The Pyramids - An Interview 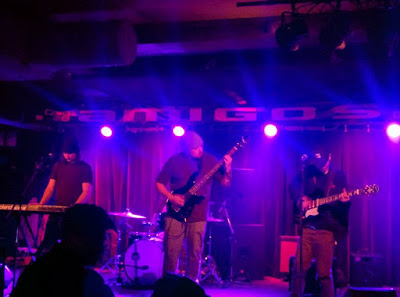 Q. When did Shirley & The Pyramids start? Tell us about the history...
Shirley & The Pyramids started as my solo project around 2008. The "group" has undergone a couple name changes throughout the years over various releases but the music and concept has largely remained the same. Recently, I decided to get a band together for live shows and future recordings - that's been the biggest change as of late.. Leading a group of musicians to play my music is a new thing for me, but it's slowly coming together.

Q: Who are your influences?
Musically speaking, the sound I'm trying to achieve is obviously largely influenced by the "classic" shoegaze sound. Bands like MBV and Slowdive hold a special place in my heart. Sonic Youth were probably my favorite "guitar band" of all time except for maybe The Beatles or something like that. I like a lot of the older stuff like The Velvet Underground, 13th Floor Elevators, Kraftwerk, etc. More contemporary influences might include groups like Dirty Beaches, Atlas Sound, Broadcast, Mount Eerie, DIIV... I don't know, I could go on. I've always been interested in music of all kinds, from Minor Threat to Ornette Coleman to Woody Guthrie, Phil Spector, J Dilla, whatever as long as it's good!

Q. How do you feel playing live?
I like to play live. It's really interesting to see how people respond differently to what you're doing, whether they hate it or love it or don't give a fuck.

Our show is pretty different from the recorded material because I play everything myself in the studio. Some songs don't really translate into a full-band setup so we can't play all of them live, not yet.. I think that's cool through because it gives the audience something different than what's on our album, it's a different vibe.

Q. How do you describe Shirley&  The Pyramids' sound?
Lately, I've been describing our sound as droney psych-pop, which is kinda cliche but apt. A local blog recently described us as "fog pop with tangible tendrils of melody" and "destructo pop wave", both of which I thought were nice. A lot of people have compared our sound to The Jesus and Mary Chain, which weirded me out at first because I don't really hear it, but it's definitely a welcome comparison.


Q: Tell us about the process of recording the songs ?
Generally, I write everything on acoustic guitar. Some things are planed and written down, others are more serendipitous but it almost always starts with acoustic guitar, sometimes a sample.. Regardless, I'll record whatever I figure out into my laptop over a click track and add what I want over top, move stuff around. Sometimes I get carried away and add way too much shit but it's fun to mess around and see what works and what doesn't. After all the parts are recorded I start to mix - that's the part that takes the longest, but after that it's pretty much done. Traditionally, I'd master my own releases but I've been getting other people to do that as of late. Our keyboard player Duncan has an audio engineering degree so he mastered the Shirley & The Pyramids album, for example.

Q. Which new bands do you recommend?
There's so many great bands coming out right now!
Respectfulchild is my friend Melissa from Saskatoon. She uses her violin and FX pedals to build really nice ambient soundscapes reminiscent of White Poppy or Sun Araw.

Waitress are another new group from Saskatoon that I'm really excited about. Their album is coming out soon and it's sure to be oozing with nu-gaze goodness. They've got a few singles out that you can check out HERE.

The Garrys are a band you may be hearing a lot about soon. They're three sisters that play washed out doo-wop and surfy garage tunes with really nice vocal harmonies. We're releasing our album on the same day as them through the same labelso we're gonna do a joint release show - i'm really stoked!
Man Meat are another band with their debut dropping sometime in the next few months. They're a three-piece post-punk band that rehearse in my basement and they absolutely crush!

The Avulsions are another band (possibly a cult) that I should mention. They've been around for a while now, but their debut album is dropping soon and I'm sure it's gonna slay.. Think Siouxsie and the Banshees except much stranger and louder.

Q: Which band would you love to made a cover version of?
we've been talking a lot about covering The MC5 lately, which would be really fun.

Q: What are your plans for the future?
Right now we're planning a short tour for August. It's been a few years since I've had the chance to go on tour, so that's exciting. I also want to have another release ready before the end of the year so I've just started writing songs for that. Hopefully the rest of the band will be contributing to future songwriting and recordings. I'd like to make this project less about me and more about a band.. I don't need to be doing everything myself anymore, these other guys have great ideas too.