Cloudy with Never - An Interview 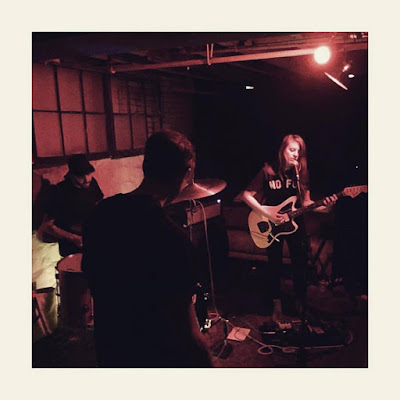 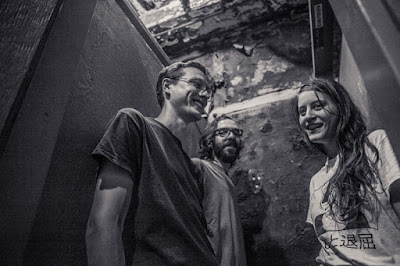 Q. When did Never start? Tell us about the history...
I think it was 2013 that Scott (drummer) and I started playing music together, both on guitar, which just wasn't working -- he's intimidatingly good and I hadn't really played guitar in a band before. As a compromise to level the playing field, he offered to play drums instead. Maybe six to eight months later, I had written most of the songs that would make it onto Cloudy, and we reached out to our friend Chris, who Scott's known since middle school, to play bass. We've been playing together for a little more than two years, but only playing shows for the last year and change.

Q: Who are your influences?
Scott and I started talking about playing music together based on a mutual love for The Anniversary, though I could not assert that we sound anything like them. I derive specific influence from whatever I'm listening to at the time, so it's constantly changing; but I can pretty much point to exactly every band or genre that drives the songs on Cloudy. The title track, I was listening to a lot of Foo Fighters' first record and Ovlov; when I wrote Saline, I was convinced we were gonna be a twee band (so Talulah Gosh, Sourpatch, etc.). With Muzzle, Chris brought the main riff, which was nearly a direct Hum ripoff. Trophy Wife is essentially a sped up Slowdive riff, and Untitled I can attribute entirely to Unwound, my favorite band. I was also listening to a lot of Hop Along (still am), and desperately wanted to sound like Frances. A pipe dream, but her vocal performances gave me the confidence to go for it.

Q. How do you feel playing live?
We're our best selves live, I think. Our songs have slightly changed over time, so playing them to people is the truest reflection of us in the present moment. I play out of two cabs when I can for a super-full, saturated sound; I feel like our guitar tones really shine. And we try to be cognizant of flow and set breaks and arrange in a way that's most grabbing for the listener. Which usually includes playing around 20-25 minutes. I think our record release will be the first time we ever really play a full set, in the proper sense.


Q. How do you describe Never sounds?
I'll plagiarize what one our friends said: "80% post-hardcore, 20% shoegaze." I have no idea how accurate this statement is. I've always struggled defining us, but maybe I'm overcomplicating it.

Q: Tell us about the process of recording the songs ?
We recorded at a studio called The Mollusk in Ridgewood, Queens. John Meredith, the producer/engineer who ended up putting out Cloudy, was really on top of making sure everything sounded on point, and was great as a vocal coach, too. But we recorded the instruments live, I think in the final order of the EP. I also fucked around with a modular synth called Little Bits that my brother got me as a Christmas gift, which is where the strange noises at the beginning and end of the EP come from. It's meant for kids to get into hardware, but whatever; it's so powerful for a battery-powered magnetic synth toy.

Q. Which new bands do you recommend?
Maybe not exactly new, but NY bands not being talked about enough: Giant Peach, Haybaby, Geometers, Peaer, Living Room (which Scott is also in), all the bands playing our record release (https://facebook.com/home.php?ref=m_notif&notif_t=like#!/events/602336236584913)... anyone who says there isn't good "new" music isn't paying attention.

Q: Which band would you love to made a cover version of?
Magnetic Fields/The 6ths.

Q: What are your plans for the future?
We're working on a full-length, which has been an interesting challenge since we're writing collaboratively. Hopefully doing some touring soon-ish. Chillin'.

Q: Any parting words?
Thank you so much!!! It's extremely flattering that you found us and enjoy what we're doing from countries away.
*
*
*
Thanks