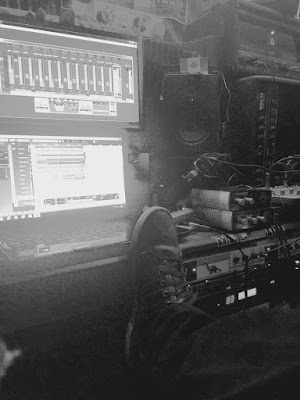 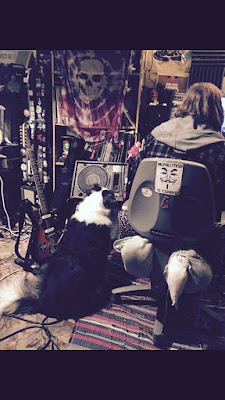 Q. When did NurseOnDuty start? Tell us about the history...
Ad: myself and Kat have been partners for about 12 years, I had been in a few bands before and NurseOnDuty was the original name we gave to our home recording project when Kat was learning to play guitar/make music,we were kind of just making songs for ourselves and friends on a old analogue 6 track. NurseOnDuty went on the back burner for a few years once we formed SugarMouse which is a band with me and Kat with two other guys. Last year various personal issues stopped the other guys in SugarMouse for rehearsing for a bit and this coincided with me and Kat moving into a new place where I was building a home studio/ practice space from scratch. One thing lead to another and as I was learning to use the new studio gear I was buying, we started writing more and more songs together. At this point we decided to revive NurseOnDuty as project and formed it into a live gigging entity as well. People seem to like it so we started doing it more and more.

Q: Who are your influences?
When we revived NurseOnDuty we went back to the drawing board, me and Kat are both massive music geeks. we kind of looked to the sounds we liked, I've always gravitated to shoegaze, noise rock, anarcho punk, hip hop and industrial music sonically, but nobody really combines those sounds and most people tend to pigeon hole themselves into often cliched small corners.

I absolutely adore shoegaze and noise rock sonically but the at the same time I've always been miffed that more bands from shoegaze'y scenes don't draw upon social commentary and politics in their lyrics. We are going through a bit of a tough time in the uk at the moment with a right wing conservative government that is very similar to thatchers time in the 80's where society is being dissolved and those with the least are being encouraged to turn on each other, so therefore it made sense for this to be an influence in the mix, as I believe all art should be a product of what you are living through. The other major influence on us is guitar pedals and equipment in general. we are always looking at pushing the boundaries of equipment drawing out unique combinations of sounds that they were never designed or intended to make, this often takes us down strange rabbit holes, I had never intended to venture down .

Q. How do you feel playing live?
Ad: I both love it and hate it! There is nothing better than being on stage with the guitar fully turned up and 'riding' the feedback, physically feeling the air push behind you and the stage vibrate under your feet. However we use a lot of equipment and the physically lugging it to venues alongside the whole host of technical faults that always want to emerge at the last second, leave me with fear, however the first point always wins out and the faults are always resolved often with luck and gaffa tape!

Q. How do you describe NurseOnDutty sounds?
Ad: Anarcho Noize pop or I think someone used the term 'RiotGaze' which I kind of liked especially as the riotgrrrl scene is a big influence on me and Kat.


Q: Tell us about the process of recording the songs ?
Ad: I tend to make a demo on my own, I'll come up with a set of riffs and record drum machines, bass and guitar. Kat then writes lyrics around this. During this process I normally come up with new layers and textures of guitars and synths. We then start fresh with everything, laying it all down again and end up with the finished song after a few days of tweaks and reworks, all that is left then is working out how to play it live. Everything is recorded, mastered and produced in our home studio so far, as that allows us time for experimentation and risks which are key to the creation process

Q. Which new bands do you recommend?
Ad:Again this list could be endless for me internationally, the kvb, Dalek (noise hip hop, just reformed), spectres are definitely worth checking, as is a lot of the stuff coming out on fuzz club records and sonic cathedral. Locally there isn't a great deal going on in experimental music terms here, it's still very much singer song writers in coffee shops and generic dull indie bands on the whole, I think we scare the the local scene a little bit! There is a guy called sukoshi who plays intense electro inside a child's pop up play house that we love and our drummer in SugarMouse has a cool side project called the Noise pollution Project.

Q: Which band would you love to made a cover version of?
Probably a place to bury strangers tune or maybe a really shoegaze'y slowed down version of a crass tune, 'owe us a living' would be great reverbed up

Q: What are your plans for the future?
To keep recording and to get out there and play live as much as possible, hit us up if you want us to play your town!

Q: Any parting words?
Thanks for checking us out and support your local D.I.Y scene
*
*
*
Thanks