Innocence with Magic Mountain - An Interview 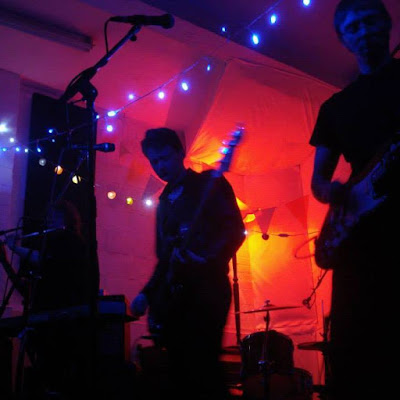 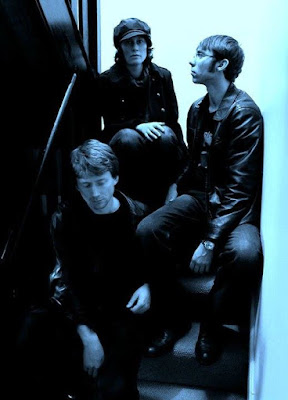 Q - When did Magic Mountain start? Tell us about the history...
James: Ash and I have been mates since we met at University in Bristol and we had a band back then called This Dumb Desire - Ash played drums and my younger brother played guitar, while I took main vocals. It was a cool band but it burnt out in the end and we both pursued different musical ventures, occasionally meeting up for a jamming session.

Magic Mountain came about when me and Ashley had a bit of a late night jam in October 2011. I had just bought a Kaossilator and we wanted to try it out. It was our first time using a drum machine - and the sound really clicked with Ash's guitar sound - the regimented beats meant Ash could make the wildest noise with his guitar. We decided there and then to start a band and we started writing songs. But the real breakthrough came with Velvet - Ash asked Sarah to do a guest flute on that track and it sounded amazing - it took the sound too a different dimension. We asked Sarah to officially join the band.

The name for Magic Mountain comes from one of my most beloved books: Thomas Mann's "The Magic Mountain". It's a strange tale of a young man searching for meaning and love in a sanatorium high up in the Swiss Alps. There's something of the dreaminess of that novel in our sound.

Q - Who are your influences?
Ash: It’s a real mix. From My Bloody Valentine to Joy Division, David Bowie to Nirvana. There are many more musicians and bands in there too but we are usually drawn to music that has heart, has a melody or hook and can move you.

Q - Make a list of 5 albums of all time…
Ash: Wow, that’s hard and grossly unfair ;-) I don’t know if I could ever limit myself to just 5 albums! I will exclude Elvis Presley albums as I am a massive fan and there would no room for anything else.
The Beatles – Sgt Pepper’s Lonely Hearts Club Band (mono version)
Joy Division – Closer
Nirvana – In Utero
My Bloody Valentine – Loveless
David Bowie – “Heroes”

James: Ok this is more like my favourite album list – which changes a lot – OK today’s list:
Joy Division – Unknown Pleasures
David Bowie – The Rise and Fall of Ziggy Stardust and the Spiders from Mars
Cocteau Twins - Treasure
Radiohead – The Bends
The Stooges - Funhouse

Q - How do you feel playing live?
James: I love playing live and putting across our music to an audience at first hand – sometimes we can get a really powerful sound – and it’s great when the audience gets into it.

Sarah: Yeah there's always the fear something could go awfully wrong on stage (and it sometimes has!) or that we won't achieve the sound we're aiming for because it will end up being poorly mixed. You're a bit in the lap of the gods when it comes to the sound engineers. It's great to be able to share our music live though and enjoy seeing the audience's reaction.

Q - How do you describe Magic Mountain sounds?
Ash: Post-punk meets Shoegaze with a hint of Darkwave thrown in!

Sarah: I find it hard to define so I usually say it's best for people to hear it for themselves

Q - Tell us about the process of recording the songs?
Ash: Usually we will have recorded a basic demo of the song at home to use as a reference. We try to be as prepared as possible before going into the studio so as not to waste time (or money!). It is a great help working with a recording engineer such as Justin Saban at Latent Lemon Studio who understands what you want to achieve, gives impartial advice and doesn’t try to take over.

As we use a drum machine we save a lot of time and can get stuck straight into laying down a rough guide track and then move on to guitar and keyboard tracks. James does his bass first and then I put down two rhythm guitar tracks to thicken things up and then add the more textured stuff such as shimmer reverbs. Sarah’s very good at nailing her synthesizer or flute parts often in one take; she’s also good at coming up with subtle variations on the fly which can really make a track take off. The vocals are the final thing that James and Sarah work on and sometimes we experiment with different vocal effects and even delivery style – they can all make a big difference to the feel of a song. James is known as ‘3 take Percy’ as by the third take he’s got his vocal spot on. He’ll do another couple after wards but it’s usually the third cut we return to.

After that, the track is mixed which can sometimes take a while as we all have slightly differing opinions on what the finished song should sound like but we usually find the middle ground in the end. Justin is very patient with us!


Q - Which new bands do you recommend?
James: I seem to be getting into a lot of female fronted bands lately - Chvrches are good, especially their first album. I saw Daughter live other day and they had a subtle intensity.

Ash: There’s so many now, the internet has opened up the whole world to new music of all genres and sub genres. I quite like Panda Riot even if they’re a bit of a My Bloody Valentine clone. Schonwald are very interesting, they’re a Coldwave duo from Europe and have some truly icy sounds. Then there’s Eaguls and Preoccupations who are both worth checking out.

Q - Which band would you love to make a cover version of?
Ash: Either ‘I’m waiting for my man’ by The Velvet Underground or ‘Ceremony’ by Joy Division. I think we could do them justice.

James: Yes, I agree Ceremony would be great – or something off Low - Always Crashing in the Same Car could work well.

Sarah: I had an idea of doing a cover of a 90s hit “What is Love by Haddaway”. I think it would be really interesting to give a dance tune a Magic Mountain twist!

Q - What are your plans for the future?
Ash: More recording hopefully and a bit of gigging if we can fit it in around parenting commitments! I’d definitely like us to get some more material recorded; we’ve quite a few songs hanging around.

James: Yeah it would be good do some gigs to promote our EP - depending on where and when.

Q - Any parting words?
Ash: Thanks for taking an interest in our music.

James: Yes, thank you so much, we really appreciate it.
*
*
*
Thanks