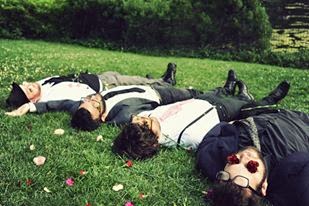 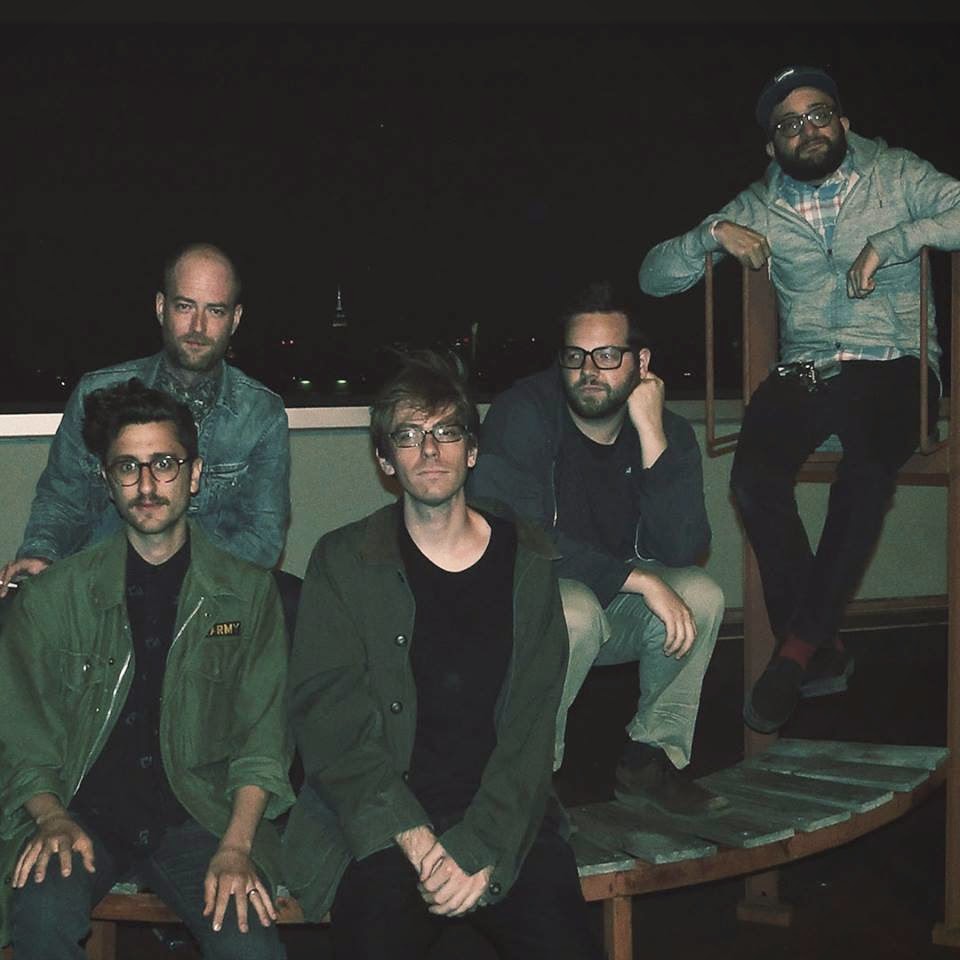 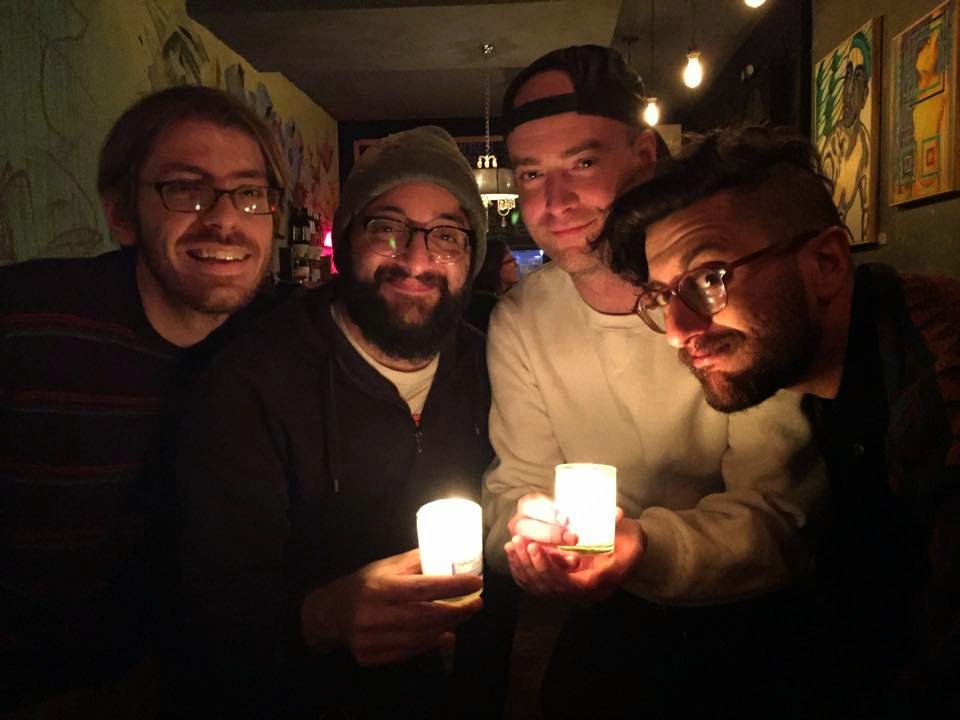 Q: Who are your inﬂuences?
My inﬂuences are really all over the map. Thankfully, I was raised in a fairly hip household. When I was with my whole family, my parents would listen to The Beatles or The Talking Heads. When I was alone with my mom, it was always Ella Fitzgerald or Patsy Cline. With my dad it was John Coltrane— my Mom loves Jazz but has a low tolerance when it comes to the more wild, squealing playing of Coltrane’s latter years. So, that was something my dad and I only indulged in when my mom wasn’t around. So, naturally, that more difﬁcult, avant-garde element was pretty alluring to me. I credit that for my eventual attraction to noise and more abstract music. But, since childhood, some other artists that have come to really affect me— Yo La Tengo, Slowdive, The Jesus & Mary Chain, Sonic Youth, Spiritualized, Otis Redding, Al Green, O. V. Wright, Candi Staton, Ann Peebles, The Ronettes, The Crystals, The Supremes, Funkadelic, Neil Young, Kelley Stoltz, The Dream Syndicate, Teenage Fanclub, Eleventh Dream Day, The Pretty

Q. Make a list of 5 albuns of all time…
This is the most difﬁcult question you could ever ask me to answer hahaha I can think of a few ways I could do this— 5 BEST albums of all time, 5 MOST IMPORTANT alums of all time…. I think what I’m gonna do is the albums that have affected me the most, personally, and have probably left the biggest ﬁngerprints on my own aesthetic. So, the 5 albums that were probably most signiﬁcant to me, personally:

Q. How do you feel playing live?
Playing live is such an incredible release. All the nervous energy and intense feelings that I keep pent up and never feel comfortable expressing just pour out of me when I’m singing and playing guitar. On the night of a Quiet Loudly show, I would be anxious to the point of making myself sick for hours leading up to the very ﬁrst note we play. I don’t know why, but even after so many years, this was always the case. As soon as our set began, I’d totally loosen up and feel completely at home. But, leading up to that, I’d always feel sick to my stomach and feel like I was having a hard time breathing. I’m a very laid back person, but I am also prone to severe anxiety depending on which way the wind is blowing. Sometimes it’s something legitimate that’s easy to pinpoint, but sometimes I just feel vague currents of dread. Couldn’t tell you why. I blame it on human chemicals or something. I also don’t really love being the center of attention. Whenever Quiet Loudly would play as a four-piece, I’d end up being set up in the center of the stage by default. But, whenever we played as a three-piece or ﬁve-piece, I’ve always felt much more at ease playing off to one of the sides. I used to be extremely uncomfortable with having pictures taken of me, but I eventually got used to that. However, I am probably a photographer’s worst nightmare— I can be a bit of a classic “shoegazer” in the most literal sense. I also have a tendency to play with my back to the crowd when I don’t have to sing— I like being able to connect with my bandmates as much as possible and kind of stay in that little world we’re creating. Also, I feel very vulnerable as the singer— I really try to dig down deep when I’m singing and reconnect with the feelings that led me to writing those songs and those feelings are usually really intense. So, it’s hard to channel all that sadness and longing and ﬁnd myself making eye contact with a stranger. Don’t get me wrong— there is no feeling more thrilling and gratifying than seeing someone in the crowd that’s making a genuine emotional connection to our music. But, it’s scary to lock eyes with someone you don’t know when you feel like you’re really baring your soul. But there was always a real electric current running through all of us during our live performances I think. I could always feel it. It was amazing to be a part of.

Q. How do you describe QL sounds?
I actually try to avoid describing us at all costs. I think people can pick up on very different things when they hear our music, depending upon where those people are coming from in their own musical tastes. I’ve seen some descriptions of our sound that make me really happy and some that make me wonder if I’m doing it totally wrong and everything is coming across the wrong way. Everyone has different taste and different points of reference. I guess I’d just encourage people to go in with an open mind and draw their own conclusions and I’ll respect whatever it is they pick up on.


Q: Tell us about the process of recording the songs ?
We usually recorded at a pretty break-neck pace. I feel like it’s easy to castrate a band’s energy but going into a studio and laying down every track one at a time or with all the band members on headphones in separate rooms from each other. Being proud of Quiet Loudly’s live performance, I felt like we couldn’t sacriﬁce that energy we had when we were all playing together in the same room. Even if the collateral damage was some ﬂubbing of notes or rhythm or any basic “roughness around the edges”, I’d rather the passion feel real and urgent than to produce a perfect, sterile product. We also never had much money or backing, so spending months in the studio was never an option for us. For the most part, we always layer down the basic tracks live, and in the same room whenever possible, and we’d play each song a few times all the way through and just keep whatever take felt the most “right”.

Q. Which new bands do you recommended?
I listen to much more music from the ‘60s and ’70s and now that I’m not an active member of the NYC music scene, I feel a little out of the loop to be honest. I’ve spent much of the last couple years listening to classic Power Pop and new weird r&b slow jams. But I know plenty of bands in both Boston and NYC that I think deserve props— from Boston: Creaturos, 28 Degrees Taurus, Slowdim, Mean Creek, The Dazies, Bent Shapes, Andy Sadoway, Babydriver, Parks, Digital Prisoners Of War, Speedy Ortiz, Burial Sound, Magic Shoppe, The Fagettes…. from NYC: pow wow!, Mount Sharp, Flying Pace, Crazy Pills, GunFight!, Heliotropes, Ava Luna, Monogold, Dead Stars, The Meaning Of Life, Passenger Peru, Hay Baby, Lazyeyes, Eastern Hollows, The Planes, Miniboone, Robot Princess….

Q: What´s the plans for future....
Well, due to the fact that we’re spread out between Brooklyn, Boston, and Philly now, it’s tough for us to do much more together. I’d love to say there will be another album some day— I’m sure we’d all love to do another album, but that might just be logistically impossible. At the very least, we plan on reuniting for a couple shows in NYC and Boston this summer and hopefully we can get back together to play at least one show every year. We’re all still very close and have nothing but fond memories of our time together so if anything ever changes and we’re given an opportunity to spend enough time together to do more than that, we would love to. In the meantime, we have plenty of other music projects to keep us busy. I play bass in a band called Clouder and

I’ve also been collaborating with my good friend Kurt Schneider on a psychedelic r&b project called Classic Dave, plus I recently contributed some guitar and backing vocals to the debut album of the amazing Spirit System from North Carolina. Sal is playing in pow wow! and Mount Sharp, Tony is working on solo tunes and a possible new band in Philly, John plays for Psychic TV, Johnny Aries, The Love Supreme, and Patrick McGrath, and JPK plays in Flying Pace and Misguided By Voices.

Q: Any parting words?
I just want to thank you, Renato, for your interest in Quiet Loudly and for taking the time to talk to me. Even though we aren’t an active band anymore, connecting with people that care about our work means the world to me. I hope all our paths cross again in a way that allows us to write more music together, but I look back on my time with the boys in Quiet Loudly and it never ceases to make me smile. Those guys have my heart and always will and I thank them too for sharing the journey with me and giving me a chance.
*
*
*
Thanks