Cupid Come with Honeymoon - An Interview 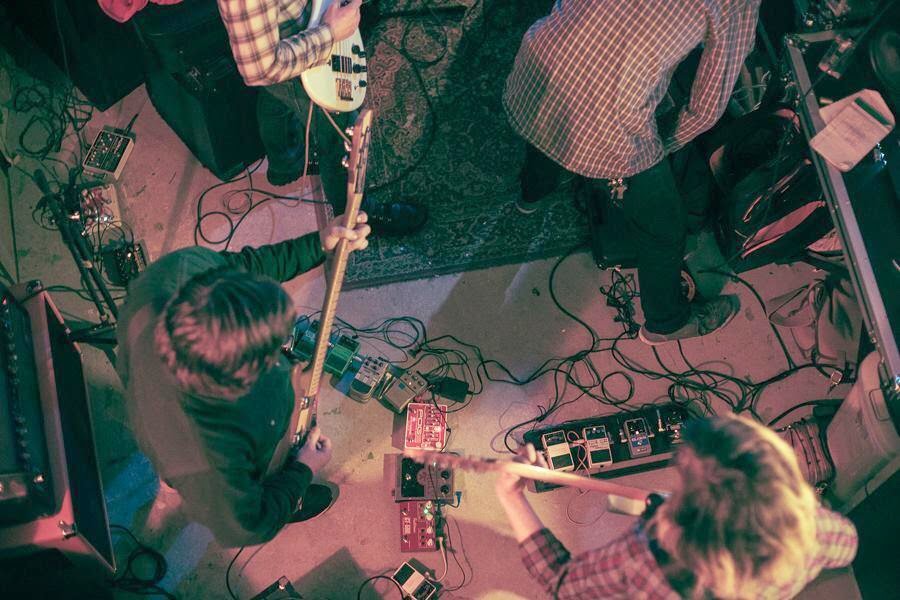 Q. When did Honeymoon started, tell us about the history...
Honeymoon is a very new band! We just started in Fall of 2014. Ryan and I were friends when we were teenagers because we both played in pop punk bands on Long Island, New York and would play shows together. I hadn't written songs in nearly ten years and started again last fall, pretty much out of nowhere, because I was feeling bad inside my brain and found it helpful. At that same time, Ryan had been posting on the internet about wanting to start a new musical project, so we connected and talked about the kind of stuff we wanted to make and it turned out that our visions were pretty perfectly aligned. Ryan knew Rob from previous musical endeavors and brought him on board, and I knew Nate through friends and looped him in. We started practicing and it just clicked really fast.

Q: Who are your influences?
There are so many. Ryan and I are from Long Island, New York and Rob is from New Jersey, so I think the 3 of us share a common musical background in a lot of ways. Both of those places are notorious bastions of punk/post-punk/emo/hardcore, so that's all been a huge influence for us. I was and still am really into the '90s Illinois indie/emo stuff, like Cap'n Jazz, American Football and Braid (especially Braid). Of course we are also really influenced by artists like The Smiths and New Order, as should be pretty evident in our sound, and the shoegaze classics like My Bloody Valentine (just the greatest), Jesus and Mary Chain, Slowdive, all that. Some of my personal recent favorites are bands like Beach Fossils, Cloud Nothings, No Joy, Japandroids. I really like Cymbals Eat Guitars, too. I think they're doing great work!

Q. Make a list of 5 albums of all time…
I polled the boys on this and the 4 of us agreed on this list

Q. How do you feel playing live?
Playing live is really fun. There's nothing quite like it. It is also very scary. There are so many mistakes that could be made. The risk of embarrassment looms large. When you're a new band it takes some time to really get your footing for a live show. We've got a lot of shows coming up and we're psyched to perfect our performance.

Q. How do you describe Honeymoon sounds?
I think the sound is a little dreamy, a little sad. Pretty emotional, but also poppy and melody-forward. It's also pretty romantic, and maybe at times kind of sexy? I don't know. I hope it sounds good.

Q: Tell us about the process of recording the songs?
We recorded with our friend Inokentiy Andreivich Aksentiev at Spacedad Studios in Brooklyn, NY and we had a really good time. The whole process was pretty quick and dirty. We recorded all the music in a couple of hours in one night, with assistance from some Miller High Life. Only did a few takes. We recorded the vocals and some overdubs a few days later, also in one night, and then did a collaborative mixing session the following week. I was very nervous because I hadn't recorded music in about 12 years, since I was in high school. Ino did a really great job of capturing our best takes and making it sound nice.

Q. Which new bands do you recommended
We recently played our first show with 3 great bands, all of whom we are proud to call friends. DONE, out of Brooklyn, are a great noisy post-hardcore band that just gets better and better every time I see them (https://donewithmusic.bandcamp.com/releases). Teen Mom, from Washington, D.C., are this beautiful fuzzy pop band who really know how to make you feel feelings (https://teenmomdc.bandcamp.com/). Sunset Guns, also out of Brooklyn, play fast and melodic garage rock and are an incredible delight to see live (https://soundcloud.com/sunsetguns). Love all these guys.

Q: Which bands would you love to make a cover version of?
We've been playing a cover of "Linger" by the Cranberries at our shows. It is such a great song, and works surprisingly well for our band.

Q: Any parting words?
We are so pleased that you found us and enjoy the songs! Thanks for thinking of us and featuring us.
*
*
*
Thanks