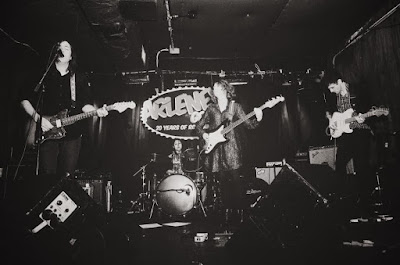 
Q. When did Vivienne Eastwood start? Tell us about the history...
Vivienne Eastwood started around 2012. I moved into an apartment on Grand St in Williamsburg and discovered that I was right around the corner from my friend Jenny's apartment. Practice spaces can be hard to come by, and Jenny had a drumset at her place and her neighbors didn't seems to mind too much when we would play! So most of the songs started out as just guitar and drum jams. I dug out my old distortion pedal and chorus pedal. A little while later my friend Lindsay joined us playing synthesizer. She was playing bass lines and lead parts at the same time on a Roland Juno 1 and it sounded rad. We shot a music video in the Hamptons. Later Lindsay moved to LA. We slowed down for a bit, continued to write songs. I remember we played a show at Cake Shop just Jenny and I. Eventually we started jamming with Bailey, and we asked this dude Phil to play lead guitar with us. So that leads us up to now... we're getting the band back together and we're going to play a show near you soon!

Q: Who are your influences?
So many! Besides some obvious nods to shoegaze bands and 90s UK indie: Smashing Pumpkins, Dinosaur Jr, Sonic Youth...

Q. How do you feel playing live?
Mostly good. I usually feel pretty excited leading up to it, then about a minute before playing there's a moment of nervousness. It depends a lot on where we're playing. One time we played in a classroom at a school in Manhattan, and that was a blast!


Q: Tell us about the process of recording the songs ?
I'll often start with drum beats, and recording guitar parts over that. I guess the process from there depends on the song...

Q. Which new bands do you recommend?
I can't stop listening to You'll Never Get To Heaven! And I recently saw this Brooklyn band called Heaven's Gate play and thought they sounded great. I'm basically into bands with the word Heaven in the name...

Q: Which band would you love to made a cover version of?
Hmm... it might be fun to do arrangements of Roy Orbison songs.

Q: What are your plans for the future?
Releasing a music video for our song "Snooze" soon! We also recently recorded a bunch of material at this venue in Brooklyn called Alphaville! We worked with Drew Citron of the band Beverly! She was very chill to work with and we got some really great material working with her! We're hoping to release an EP of that stuff soon too! We're going to be playing Northside Festival (6/11) at a venue called Muchmore's... along with a few other shows in June!