Get Home Safe with Teen Body - An Interview 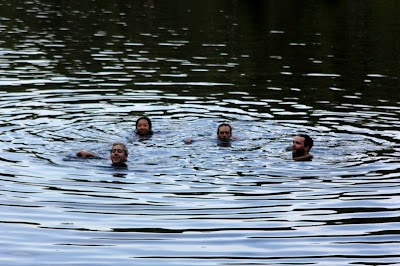 Q. When did Teen Body start? Tell us about the history...
MM. It was actually our old guitarist, Evander who brought us all together back in the Spring of 2014. We were hanging out and this terrible thing happened that no one can ever speak of again. Ever since then we vowed to create a band in honor of the horrific events that occurred.

MM: All Animal Collective related projects, and pretty much everyone they worked with, old school twee/lofi, new school twee/lofi, my friends <3 br="">
SL: What Bush said and I'm really, really excited for Angel Olsen's new record, I love everything she's been involved with and her solo work is so inspiring. Jonathan Richman's one...I also listen to a lot of WBLS. Rihanna's latest, Molly Nilsson... AF: I go through really sporadic music obsessions. I went through an 80's post-punk/new wave one about 6-4 years ago that probably ended up influencing this project the most. Bands like New Order/Joy Division, The Cure, Depeche Mode, Tears for Fears, China Crisis, Echo and The Bunnymen, Gang of Four, etc, etc.

Q. How do you feel playing live?
SL: I still get physically nervous in spite of how comfortable I think I am. Somehow no matter how many times you play, it always feels kind of new.

MM: I usually don't remember most of what happens. Its kind of like being in a trance back there.

AB: After the first song, my nerves clear up because I'm reminded of how much fun it is to play together. AF: I usually feel like I have to be energetic or we will appear boring. I might be the first person to jump during a set. Also, we always feel way more comfortable when the crowd is loose and crazy.

Q. How do you describe Teen Body sounds?
TB: dreamo


Q: Tell us about the process of recording the songs ?
MM: We went into the studio with our friend Bryan Keller (of the dope band Softspot) and just sort of began exploring how to get the sounds and tones and moments captured in a way that was nice to hear on a speaker. The final product is a little chiller and laid back than how our music comes across live.

AF: In a lofted living space in Bushwick, the mic's were in the open ceiling portion of the apt, and the mixing board was in a second floor bedroom you could step out onto a balcony and yell down at the person playing. I was already fairly chummy with Bryan, but recording was the first time as a band we all got to joke around with him. The humor just got more and more obscure and by the end we all basically sounded nuts. Daymoon almost got renamed Damon because we only spoke in Australian accents that day.

Q: Which band would you love to made a cover version of?
MM slowdive would be reeeeally fun!

SL take me down to pedal town!

AB - "What Goes On" by the Velvet Underground. Would be so much fun to duel solo with Shannon on that track. I think French could do a good Lou. AF: Taking Back Sunday.

Q: What are your plans for the future?
Touring, recording the new stuff we've been working on, becoming an experienced mage, writing new songs

AF: Album is out mid-June (self-released, digital and tape), then we tour south as far as North Carolina in July. Keep playing our fair city until somebody offers us some sweet national tour support slot ;D