Broken Recorder with These Sonic Waves - An Interview 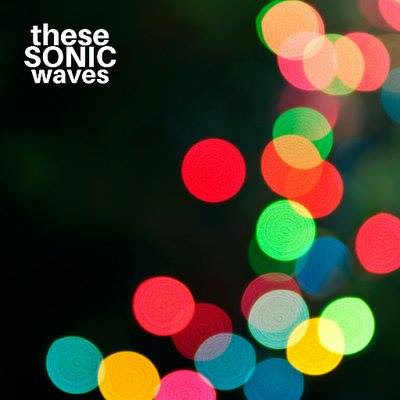 
Q. When did These Sonic Waves Start?
Officially started as 'These Sonic Waves' in February; however in reality I have been working on the songs properly since the middle of last year with a view to them being used at some stage but I didn't have a name for it at that point. Things started to become more focused once Gina became involved to provide some vocals at the tail end of last year and early this year.

Q. Who are your influences
I think it's pretty much impossible to have any interest in shoegaze music without citing My Bloody Valentine as an influence so I will have to get that out of the way first. However I would have to say that we are not really a full on shoegaze band and like to think of that as one element of our sound. Production wise I'm massively influenced by Dave Fridman's work, especially the late 90s stuff with the Flaming Lips and Mercury Rev, there's something fantastic about the way that the sounds of traditional instruments are manipulated and distorted just enough to sit perfectly next to each other and create a distinctive and interesting overall sound.

Q. Make a list of 5 albums of all time
This is going to be terribly predictable but I have to be honest so I would go with:
My Bloody Valentine - Loveless
The Flaming Lips - The Soft Bulletin
Godspeed You! Black Emperor - Lift Yr Skinny Fists Like Antennas to Heaven
The Velvet Underground - The Velvet Underground & Nico
The Beach Boys - Pet Sounds

I think it's probably fair to say that I would quite like to sound like a bit of a mix of all the above!

Q. How do you feel playing live?
I have to say 'I don't know' as we have not played live so far. These Sonic Waves has very much been a studio project, and would need to get a band together to recreate it live....hopefully that's something that can come together once the album is finished though

Q. How do you describe These Sonic Waves sounds?
I'm always hopeless at this, I suppose the closest genres are probably Shoegaze and Dreampop...however a friend described us as 'The Delgados vs Mazzy Star, refereed by The Flaming Lips' and other than obviously taking that as a compliment I just really liked the description.

Q. Tell us about the process of recording the songs
In most circumstances it starts with something that I come up with on the guitar and everything builds from there. It may not necessarily stay as guitar but I find it the easiest way to come up with the main basis for the track. I use Cubase and the thing I love, and sometimes hate, about the process is that it then takes a life of it's own and I never really know where it is going to end up. I may have some pre-conceived ideas but sometimes something I am convinced will work ends up getting ditched and other times a bit of initial messing around suddenly develops into one of my favourite tracks. On any track there is likely to be a combination of many audio and MIDI tracks, so in addition to recording guitar normally I also have recently started using a MIDI guitar which sounds an utterly ridiculous idea and something from a bad 80s band ... but it's sort of messed up and doesn't quite play things exactly as you intend and then when that's put through some of my favourite synths and plenty of distortion and delay it can generate some quite unexpectedly great sounds. There's something about the random chance of it all that fascinates me and many of the best moments have an element of being accidental! The easiest bit has been the vocals as Gina has a brilliant voice and has been great to work with on the debut EP. We are situated at opposite ends of the country so everything has been done via sharing files back and forwards.

Q. Which new bands do you recommend?
I thought this was going to be an easy question to answer and then realised that probably none of the music I have discovered in last few months has actually been the band's debut album so probably can't really be classified as 'new bands'......think I have become slow on picking up on new artists! Having said that I will be interested to hear what the debut album from Minor Victories ends up sounding like, really enjoying the Helen album still, and to cheat on the definition of 'new bands' I love the new DIIV album.

Q. Which band would you love to make a cover version of?
I always think that a great cover version should put a completely different spin on the song so I wouldn't necessarily always look to cover something by one of my favourite bands. I have always liked the idea of taking pop songs and taking them somewhere else entirely, an obvious example of this approach is Superstar by Sonic Youth. I'm also quite keen on the challenge of taking something I don't like and seeing if I can turn it into something I enjoy. You may think I have had too much to drink here but I was in a bar recently and heard SOS by ABBA...and thought I reckon there's a decent shoegaze track in there waiting to be let loose if you start from scratch....ha ha yeah perhaps I'm being too ambitious there but that's the way my mind works in looking for a challenge.

Q. What are your plans for the future?
From here its a case of working on finishing the album. The aim is to have that released later this year! I probably have about half of it ready with lots of work in progress tracks. Will be working with Gina again on some more tracks plus a few instrumentals so plenty to do

Q. Any parting words?
Keep up the good work.....and forgive the ABBA reference!
*
*
*
Thanks