Playland with Supermoon - An Interview 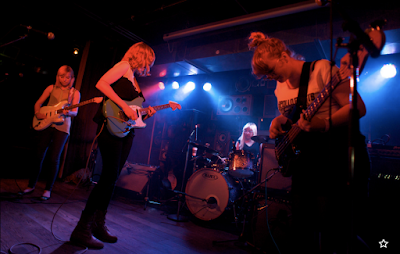 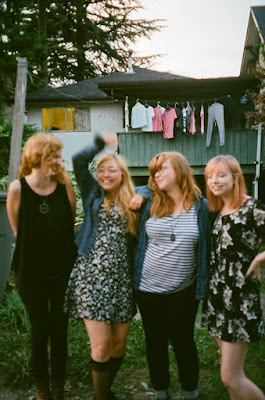 Q. When did Supermoon start?
Tell us about the history... Supermoon started at a New Years party, it was 2013 going into 2014. Alie, Selina and Adrienne had been in a band for two years prior to that called Movieland, and Katie had been in a band called PUPS. The two bands released a split cassette together in 2013 and it was all very lovely. But, in late 2013, Davina from Movieland stepped away to pursue other projects and Katie had heard the news at the party. She said she would love to take Davina's place, but we all decided we should start fresh, rename the project, not play the old songs, write a whole new set. And thus, Supermoon was born. We didn't actually play any shows for several months, but we applied for some music festivals, and once we got into them we realized we actually had to follow through with the idea. We scrambled to write a six-song set, and we pulled it off, and never looked back!

Q: Who are your influences?
Collectively, I'd say we have drawn upon the Pixies, the Breeders, Gang of Four, Modest Mouse, Joy Division,and if you must know our guilty pleasure, the Tragically Hip.

Q. Make a list of 5 albums of all time…
This one is pretty hard for us to all agree on but we've made a list of our five(ish) shared favourite albums!
1. Gang of Four, Entertainment
2. Pixies, Bossanova
3. Built to Spill, Keep it Like a Secret
4. Talking Heads, 77
5. Pavement, Crooked Rain Crooked Rain
5.5. Weezer, Blue Album

Q. How do you feel playing live?
Really depends on the day and the situation. When conditions are right, and everything sounds good, it feels amazing to play live!! But...unfortunately it does not always end up that way. We often deal with sound issues, and a big obstacle that can really throw off a live performance is sexist sound technicians. People will treat us like we don't know anything because we are four women, and often our sound is worse because we aren't taken as seriously as other bands might be. It is unfortunately still a common issue. Even after we play, we will sometimes feel like we played a really good show, and then someone will come up and offer us unrequested advice on how we can improve, or things we should consider changing, which can really put a damper on things. But for the most part, we love playing together, so when we play live it's a pretty powerful feeling, especially in new cities!


Q. How do you describe Supermoon sounds?
Like a happy nightmare. Like watching a creepy movie while eating a hot fudge sundae. Like a summer vacation in monsoon season: warm rain, stormy skies, sunshine breaks, global warming.

Q: Tell us about the process of recording the songs ?
For this album (Playland), we did it live off the floor to begin with. We spent one day going through the eight songs, playing each one no more than three times. We made a rule that we would not be allowed to keep doing them over and over again. It worked pretty well, though that put a lot of pressure on us! We didn't do too many overdubs but we did add a few things here and there. We had a good friend, Tom Prilesky, record and mix everything for us in his studio. It was a very laid-back experience, and we had a lot of fun. The mixing process was really where Tom's patience kicked in. We had a lot of demands and a lot of things we wanted to try, some of which we ended up scrapping in the end. The whole process took up many, many long days and nights before we were convinced it was as it should be. (Thanks Tom!!)

Q. Which new bands do you recommend?
We go to a lot of local shows, so many of our recommendations are going to be Vancouver bands. Dumb, Adrian Teacher and the Subs, Shrouded Amps, Milk, Tough Customer, Gal Gracen, Cult Babies, True Crush, Other Jesus, Fountain...We just saw this really great new band called Scum Laude, they ruuuuule.
Q: Which band would you love to make a cover version of?
Modest Mouse / The Pixies / The Tragically Hip? haaaaa

Q: What are your plans for the future?
We are releasing our first full-length album, "Playland", on May 20th. It is an 8-song double 7", and will also be released on cassette and digital download. We are touring down the West Coast of the U.S. right after that for 2 weeks, we are playing some Canadian festivals, and then going on a month-long Canadian tour to Halifax and back this summer with Jay Arner. We may try to do some shorter tours in the fall, depending on our day jobs and collective schedules... After that we're hoping to write some more songs and record some more and hopefully tour some more!!

Q: Any parting words? Thanks for asking us these questions!!!
Thanks for caring about our music!! We'd love to come to Brazil one day!!!
Thanks again.
*
*
*
Thanks