Love Songs with The Hungry Ghosts - An Interview 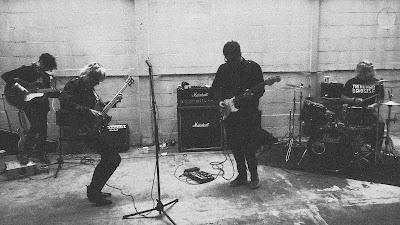 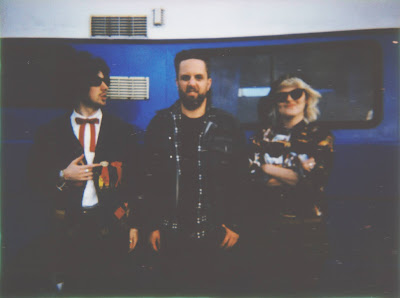 Q. When did The Hungry Ghosts start? Tell us about the history...
A: The Hungry Ghosts started with cousins Joe Joseph Billy Ollis, writing songs and recording them onto an old tape machine. We began with little more than contempt for bands and even considered destroying the evidence before these reels of 1/4 inch magnetic tape could ever slip out the door. Eventually we made a pact to let these songs about jealous lovers, cruel hunters, cannibalism and bodies trapped in ice out from behind lock and key, playing occasional shows with the reel-to-reel tape machine in place of a human drummer. Billy had grown up playing in a band with Jodie Lawrence and happened to tell her at her own birthday party that we were looking for a bass player which is when she put herself forward for the available vacancy. We three set up headquarters above our local record shop owned by Steve Hadley who we fortuitously met at our very first show at The Sunflower Lounge in Birmingham and who over the years has become our manager and in all things our fearless leader. Here we recorded our first single ‘Love Songs’ that we released on Wiener Records and began to write our forthcoming EP ‘Blood Red Songs’. After a long succession of shows and drummers we met the thunder behind the kit, Mike Conroy behind the sound desk when we supported The Alabama 3 at Alfie Birds in Birmingham, thereby completing the band. And this, in short, is how The Hungry Ghosts were assembled.

Q: Who are your influences?
A: We love The Blues, particularly the sound of the Mississippi Hill Country of Junior Kimbrough, R.L. Burnside and Fred McDowell; we love Country from Hank Williams to Dolly Parton; and we love Abler Jay, Charlie Feathers and Hasil Adkins. Breaking through the soil from the mighty tap root of the American South where all songs take sustenance, some of our favourite music comes from Pixies, Patti Smith, The Stooges, Tom Waits, The Birthday Party, The Gun Club, Flat Duo Jets, Nirvana, The Cramps, The White Stripes, The Gories, Queens of the Stone Age, Bob Dylan and The Velvet Underground.

Q. How do you feel playing live?
A: Like dog food being eaten by a dog, full of vitamins and goodness to make him a healthy and strong boy.

Q. How do you describe The Hungry Ghosts sounds?
A: Slaughterhouse Blues and Trash Country, music from the other side of the fence.

Q: Tell us about the process of recording the songs ?
Recording began with just ourselves and an old Teac 4-track tape machine - although the process has now to some degree left home, as our friend Oliver Colbourne has taken the reins as producer on our new EP ‘Blood Red Songs’ and last month we moved into to a unit in Digbeth, Birmingham that we call ‘The Mausoleum’ or ‘The Maus’, we have maintained a strictly in-house approach to writing and recording, doing every part of the process ourselves with the materials at our disposal and staying with the song at every single stage from its birth until, after mixing and mastering, it has legs to step out into the world. We are sure that never has such a concerning degree of care been taken by a band to sound like they don’t care. It’s pathetic really.

Q. Which new bands do you recommend?
A: We can most definitely recommend Phobophobes and Virgin Kids who we very recently played with in London and Table Scraps, Bad Girlfriend, Youth Man, The Mighty Young, The Lizards and Amber Riot from our own mother metropolis of Birmingham.

Q: Which band would you love to made a cover version of?
A: Patti Smith Group

Q: What are your plans for the future?
A: We have an EP called ‘Blood Red Songs’ that will soon be out on vinyl and cassette on Setting Son Records (UK) and Wiener Records (USA). We plan to play more, record more and preach the word of the new genres of Slaughterhouse Blues and Trash Country the world over.

Q: Any parting words?
A: Again, our new EP ‘Blood Red Songs’ will soon be fresh off the press. Buy or steal it right here in the ones and zeros or at our shows and in stores in the cold light of the real world. What a time to be alive.
*
*
*
Thanks