Kolliderscope with Sons of the Void - An Interview 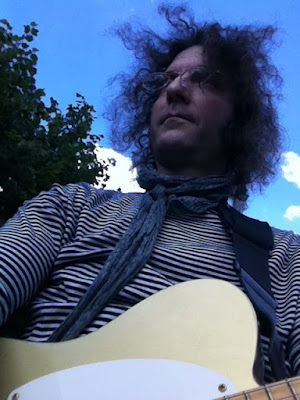 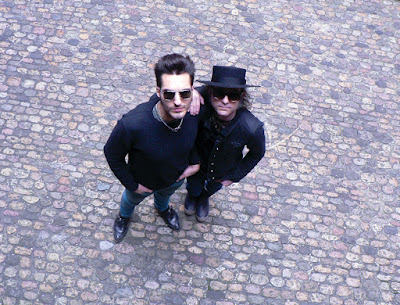 Q. When did SOTV start? Tell us about the history...
SOTV started about a year after I emigrated to Switzerland from the US. I spent the first year living in Switzerland recording my first material after leaving Psychic TV, those songs became my first solo recording, called Simple Psychedelic Pleasures. After it's release on Mind Expansion Recordings, I decided to put a band together to gig these songs. Luckily I found a great young guitar player, Nick Nobody, that shared a lot of my influences, which is hard to find in Basel.

Q: Who are your influences?
God, that could be a really long answer!! Music really affected me in the back seat of my parent's car, for the first time. So that would be early rock n roll, fifties and sixties American and British pop and doowop and rock n roll. Punk rock was a huge influence on me growing up in the 80s, and then the post punk noise scene was where i really began to follow music for more than entertainment. It was the Jesus and Mary Chain that got me to buy a guitar. Psychedelic and experimental music took on a greater influence, looking back, early Pink Floyd and the Velvets, plus all the great psych of the past....Dylan is in there somewhere too.

Q. Make a list of 5 albums of all time…
I decided that I would not list anything from before 1980, because otherwise my list would be kinda filled with the usuals.. so honourable mention to Piper at the Gates of Dawn, Revolver, John Wesley Harding, White Light White Heat etc. etc.....

Q. How do you feel playing live?
That really depends on the audience, actually. I wish I could say that I didn't care, but I do. When you feel love from the audience, you reflect it back, and that is when playing makes me feel the best. It really is a conversation. What is difficult for me is that I tend to fall back into myself while playing, going into that deep dark place where only myself and the music exists. But then the conversation with the audience stops and the conversation of the band stops as well, and thats not good for the vibe of a live performance. Or shall I say the conversation must become sightless.

Q. How do you describe SOTV sounds?
I describe it as electric, ecstatic folk music. Psychedelia with pop and experimental elements. Music for burnt out Sunday Mornings.

Q: Tell us about the process of recording the songs ?
It took about 5 years, however the process got interrupted by the birth of my daughter, Onna. i have a good excuse for taking so long! It was recorded in Basel, in my own Logical Magic Studio. The original rhythm section for the SOTV live band was not used. The newest songs required a different approach than the one used for gigging the solo album. I was lucky enough to meet Steve Valentin, ex drummer of band Navel. He had the experience and touch that I needed. We tracked the drums first, while playing together, Nick Nobody and I, as much as possible to preserve the live feel. We did not rehearse these at all before recording. I was interested in that Neil Young moment of magic that comes with the first few takes. For some other tracks I contacted my old friend and Psychic TV band mate, Eddie O'Dowd, in New York.... He graciously recorded drums in a local Brooklyn studio for me to take back to Switzerland. Half are Steve on the record, half are Eddie. I mixed the record at Logical Magic. It was then sent to Kramer of Shimmy Disc fame, in Florida, for mastering. He did a great job.


Q. Which new bands do you recommend?
I can't really say how new these bands are, but rather somewhat new to me, or what I am into at the moment.....

Q: Which band would you love to made a cover version of?
i have been recently learning and practicing How Does it Feel to Feel, by the Creation, as well as The Younger Generation by the Lovin' Spoonful.

Q: What are your plans for the future?
Currently I am putting together a new live band for SOTV, and am looking for a like minded bass and synth players. Of course, working on new material, with current drummer David Kerman, is an on-going process. I hope to be gigging the album tracks and new material with an all new group of people, as soon as possible.

Q: Any parting words?
Thanks to everyone that has supported me and given me the space to create, and to everyone that ever gave a shit! Particularly, I would like to thank my wife and daughter, Rebekka and Onna. This work would not have been possible without their love.
*
*
*
Thanks