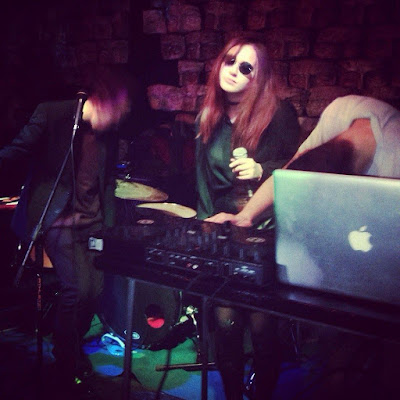 Q. When did Champanes start? Tell us about the history...
We’ve written somewhat like an official bio:
Champanes was started by Lexi Freider after he made a Dutch bargain with a bass savage. Getting reinforcements from Puerto Rico, the band rehearses for the first time with drummer Tommy Daimes in April 2014. Lexi used to hang out in backstreet bars at the time, boozing up pure alcohol drinks. That is how he met Lisa, an Ariel Pink’s unlawful bride, and invited her to join the band. Defining themselves as a sparkling fun from outer space, Champanes were recording their first bedroom tapes. With regular line up changes, the band approached the ionosphere playing a number of shows.

First half of 2015 caught Tommy and Lexi playing as a duo since Lisa had left the band at the beginning of the year. Writing a new song at each rehearsal, they presented a completely new set of songs in June. However, the going gets very tough in mid-summer. Only a miracle can save Champanes, and it actually does: in a haze of shoe Lexi meets Nick, a prophet pimping a red nine. By the end of August, Champanes had reunited with Lisa and locked themselves in their own studio to set out into a six-month journey. “Daniel Laments”, a first song from the journey, was dropped by the band to celebrate New Year’s Eve 2016. Next Champanes' release was brought by Washington-based Really Rad records and contained two songs recorded during the journey. At this point the band has joined Beko disques family and started to prepare their new release called “Daysaway”. Lisa left the band for the last time. She was replaced by miraculous Lola Hölz, a cool one.

Tommy: I can name Kraftwerk and Del the Funky Homosapien as my main influences.

Q. Make a list of 5 albums of all time…
Lexi: 1. John McLaughlin’s Extrapolation and 2. Yes’ Close to the Edge

Lola: 4. ”The noise made by people" by Broadcast

Q. How do you feel playing live?
Nick: Like a boss, haha

Q. How do you describe Champanes sounds?
Nick: Eternal sunshine of spotless mind.

Q: Which band would you love to made a cover version of?
Lexi: Some time ago we were about to put a spot on Jacco Gardner’s “Clear the Air”.

Lexi: The thing is we don’t play covers.

Q: What are your plans for the future?
Lexi: We’re going to release our first vinyl and play tons of gigs in Europe and US this year.

Q: Any parting words?
Lexi: Thank you for your interest in Champanes. We’ll be glad to see you at our shows! Luv.