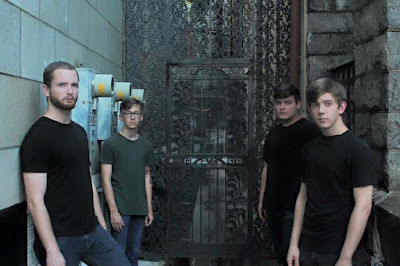 
Q. When did Teen Divorce start? Tell us about the history...
Teen Divorce is an Indie Rock/Punk band from Jacksonville Fl. that mixes gloomy lyrics with an upbeat sound reminiscent of Chapterhouse, Turnover, The Foo Fighters, and 60’s R’N’B. The qband is formed under the idea of “helping people live in the moment through music”, and can be reached via email at teendivorce@gmail.com.

The band is the sole brainchild of Jacksonville musician Ben Saunders, who began writing material for the band three years ago as a student at the University of North Florida.

“I had had a breakup, and lost all my friends in the duration of 1 day,” Said Saunders. “With no one to distract me, I began writing music at a really quick clip, sometimes recording three rough demos of a song in a day.”

Saunders had planned on releasing the songs as an EP in the Summer of 2014, but instead retreated to the mountains of Tennessee, writing more and more demos at night and poems during the day when he worked as a conductor at local Fox news-sponsored disneyland copycat, Dollywood. It was at that job that he had a life changing experience.

“As weird as it sounds, having Katy Perry call me a crackhead was what changed my life.” Said Ben Saunders. “I was working on the ride, and was very excited to meet her, because, for all my pretensions, “firework” is still a fucking hit. But when I went to meet her, she told me snidely to “save her some crack” as the ride pushed off. And something about that made me want to pursue music ’til the day I died.”

After that summer, Ben recorded his first EP, be, using whatever studio equipment he could borrow from friends, and releasing it via bandcamp. It wasn’t until his second release, upcoming single “Died Red”, that Saunders felt he truly found the sound of Teen Divorce.

“Josh (Cobb) was a really good thing for the direction of the band.” Said Saunders. “It was really cool to have an actual producer who knew what they were doing, and who could show me the ropes.”

Q. Make a list of 5 albuns of all time…
1. Slowdive (Artist), Souvlaki(Album); this is the album that completely shifted everything about how I view life, music, etc.

2. The Ramones, The Ramones- Literally all one would ever need to listen to to write great songs.

3. Chief Keef, Bang 2- This one is oddly sentimental. I spent a lot of time two years ago skating alone, jamming out to these songs. It was what got me over a break up, and it was really weirdly numbing and therapeutic to listen to.

4. Converge, All We love we leave behind- Kurt ballou is my all time favorite guitarist, and producer. Every moment in this album flows perfectly and is impossible to pull away from.

5. Parquet Courts, paint it gold- A masterclass in dynamics, noise, and beauty.

Q. How do you feel playing live?
Playing live feels like truly being immersed in the moment. I feel at home, complete, and truly me. I love seeing people react to music, and feeling responsible for this.


Q. How do you describe Teen Divorce´s sounds?
A well thought out intentional moment captured in sound. Also, indie/shoegaze.

Q: Tell us about the process of recording the songs ?
Died red was recorded with Josh Cobb. He's played in a ton of great bands, and he truly understood what the song needed to sound awesome.

Q. Which new bands do you recommend?
Our friends in weekend atlas are truly awesome dudes with a great new single, She's on Fire, out on spotify. Intervention is another great band coming out of South Florida. Also, Teenage Wrist is the best new band that has come out in years and deserves allllll the respect, praise, and success possible.

Q: Which band would you love to made a cover version of?
Probably converge covering chief keef. I feel like that would be incredible.

Q: What are your plans for the future?
Teen Divorce is the only thing I will do until I die by either gods hand or mine. I have new songs, new merch ideas, and as soon I nail down a full band, the will and resources to tour forever.

Q: Any parting words?
Love yourself, be in the moment, and truly think slow.
*
*
*
Thanks