Anywhere but Here with Lanark - An Interview 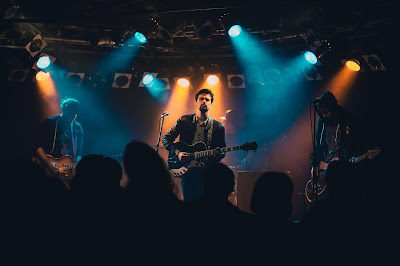 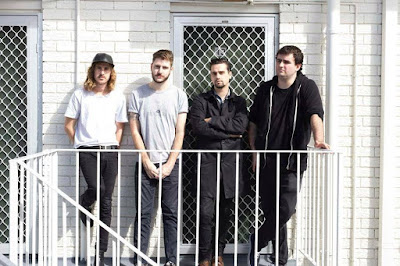 Q. When did Lanark start? Tell us about the history...
Lanark started in early 2012 after a few of our initial projects fizzled out.
Damian and I (Sandon) used to play in HiHelo together whilst Mikey, Temily and Darren used to play in a band called All Eyes On Saturn. It felt pretty natural to line up a jam after both bands went separate ways.

Everything is ultimately linked back to an old derelict share house in Perth (Western Australia) on 'Lanark’ street; where we all used to hang out/met each other and other key people who have influenced the Lanark journey.

Q: Who are your influences?
Our influences are frequently changing.
With this being said, we all initially bonded over our shared love bands like Radiohead, The Antlers, Explosions in The Sky, Mogwai, Port St. Willow, Foals, Boards of Canada, My Bloody Valentine, Tycho, Interpol, Deerhunter, Slowdive etc.

Q. How do you feel playing live?
In Lanark there are so many different elements running parallel to each other that live performances can be quite different from show to show. When we are all locked into each other’s groove and the general vibe is right, it’s pretty hard to beat the feeling of playing live. I (Sandon) feel pretty lucky to play in a band with some of my favourite musicians who are also some of my best friends. I tend to zone out a little if I’m in the right space when we play live. It sounds very cliché’, but I tend to just move around spasmodically and not think too much about the stupid faces I might pull or my ‘chicken head’ movements. Most songs allow for some improvisation in tones/swells or guitar parts. I try to judge the general feel of the performance with everyone’s general vibe on stage. If the vibe is a little mellower; I try and hit a note a little softer or play a little less. But if there seems to be a tension or nervous energy/excitement, maybe I’ll play a note/chord in an aggressive or violent manner. Mainly I just like heckling our drummer Darren mid-song and he usually steadies the ship or changes the vibe/feel as we play.

Q. How do you describe Lanark sounds?
Our sound has changed pretty extensively since we started in 2012. We initially struggled to take a cross section of everyone’s influences and make them work as a cohesive song. But after a while we realised that drawing from completely different sources/ideas helped us write songs that we are all really proud of. Our debut album is the ultimate amalgamation of our different interests and passions for post rock, shoegaze and pop music.

Since the release of our debut record in 2014 we have continued to explore different genres and will continue to explore new ideas whilst writing our next release. Our new track “Anywhere But Here” doesn’t really fit alongside any of our other tracks, but I think we all like that feeling of contrast between our songs.


Q: Tell us about the process of recording the songs ?
Our new track ‘Anywhere But Here’ was written/recorded in a completely different manner to how we would normally work. Darren, who mainly plays drums in Lanark, had written a chord progression that we all really liked. We therefore just decided to swap instruments to see if we could approach writing from a different angle. I personally think that playing an instrument that is foreign to you can help you write something that is less convoluted and sometimes more poignant. It can allow you to focus on the actual idea in its simplest form. Our previous keys player Tem is left-handed and had to channel a bit of Hendrix when writing some guitar riffs on a right-handed guitar. Our bassist Mikey also enjoyed working on the drums, as did I (Sandon) working on the bass. I think that this method of writing may reappear in future writing sessions.

When we recorded ‘Anywhere But Here’ with Dave Parkin, we alternated between instruments again to ensure that the track had the best feel, regardless of who was playing what part.

This exploration of new writing techniques has also inspired Darren and I (Sandon) to start a new project called Peppermint Showers.

Q. Which new bands do you recommend?
Whilst this band isn’t necessarily new, the new HYLA track ‘Chaos for you’ is great - https://soundcloud.com/hyla-music/chaos-for-you

Cheeky plug – Peppermint Showers are due to release new material soon; which is exciting.
Here is there first track 'Soto'.
https://www.youtube.com/watch?v=2HnOBH5zP88

Q: Which band would you love to made a cover version of?
A few years ago we learnt/rehearsed a cover of ‘Swimming Pools’ by Kendrick Lamar but never played it live… Maybe we should one day. Our good friend Billy Reeves was spitting some fat rhymes over the track, so it was a lot of fun. Who knows maybe it will make an appearance in the set one day.

Q: What are your plans for the future?
We are looking to continue working on new material and hopefully release an E.P later this year. Maybe some exciting vinyl plans to follow also…
*
*
*
Thanks