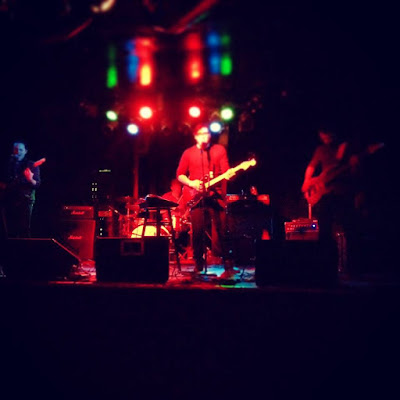 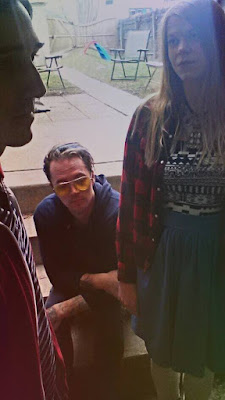 Q. When did Animal Holograms start? Tell us about the history...
Jason: I had been writing and recording songs under different aliases for a few years and one day in late 2012 I decided to try something new with my approach to songwriting and called it Animal Holograms. Since then, the band has seen quite a few members come and go. We made ‘Phantasmagoric Menagerie’ in 2015 with the band's longest enduring lineup which lasted from January to October of last year. After the split, I wasn't sure if I really even wanted to continue making music anymore. But after meeting Marshall and Shannon in December of last year, I've been getting accustomed to a new way of creating music which involves a great deal of compromise, patience and collaboration which just never had been a part of the process for Animal Holograms. It's, among other things, refreshing and less stressful for me now, and that's eliminated all the resentment, unresolved conflicts and pent up emotions which can build up in a band with one person at the helm 100% of the time until it just gets to be too much. It's a truly collaborative effort, and I'm constantly surprised and delighted by where things have been going.

Q: Who are your influences?
Jason: We definitely share some of the same influences, but I think it's the variety of influences we don't share that makes what we're doing now so much more interesting. Personally, a few of my own musical influences are Elliott Smith, the Smashing Pumpkins, Cursive, Blake Schwarzenbach and Daughter.

Q. How do you feel playing live?
Marshall: Nothing better than doing what you love most in front of a receptive audience. Putting your heart and soul and the years of practice and preparation into one single performance puts everything on the line. At any moment you know things can go wrong, but you have to focus on the other musicians on stage and make sure you are adding just the right amount to make them sound better.

Jason: It varies from show to show. But ultimately that's what you've spent all this time together as a band really working on and preparing for. And when everything's right, you know, gotten my six hours of sleep, taken my gummy vitamins and replenished all of my electrolytes with sugary sports drinks all day, then I'm where I need to be and geared up to sweat it out on stage. That'd be the short answer--it feels sweaty.

Q. How do you describe Animal Holograms sounds?
Jason: I try not to. I'm just not the right person to be answering that sort of question.

Marshall: The band is currently going through an evolution of sound that retains the indie vibe, but is focusing on a more unique approach to melody, instrumentation and songwriting.

Jason: I don't know why I couldn't come up with an answer like that, but Marshall hit it on the head. Animal Holograms has always been a band in sonic flux. But now, it's not just one brain with the vision trying to communicate that vision to a few other brains hoping to externalize something stubbornly internal as well as private and visceral. Now, the way songs get written is maybe I'll be noodling around on the guitar while Marshall and Shannon are busy putting the kids to bed and at some point in walks Marshall who just starts reacting to whatever I'm doing, which makes me hear what I was playing in a completely different way. So it'll go back and forth like that, and suddenly Shannon will sneak in like a ninja and start doing all sorts of beautiful and haunting vocal gymnastics and adding new dimensions to the thing with her theremin. That may not answer your question really, but I guess Animal Holograms sounds like something growing of it's own volition, an autopoietic audio creature with a tendency towards becoming something strange and intriguing for humans to pay attention to and try to understand.


Q: Tell us about the process of recording the songs?
Jason: The process now as opposed to then reveals an enormous disparity. Recording ‘Phantasmagoric Menagerie’ was an exhilarating nightmare for me, which I wouldn't trade for anything in the world. I wrote essentially all of the music, recorded everything myself, mixed the record at our apartment and even--reluctantly and full of uncertainty--mastered it. Drums took two days, bass took two and a half days and guitars and vocals took something like three weeks or more. I remember recording guitars for “Psychoasis”, the last song I tracked for the record. I had been cooped up in our tiny rehearsal space for almost three days without sleep and very little to eat just trying to get it right. After more than three weeks of this sort of manic, obsessive and perfectionist approach to recording which involved little sleep or eating much of anything, I literally shut down. Half of the guitars on that song are a mystery to me. I don't remember writing or playing them. I just remember our bass player at the time opening the door to our humid, cluttered space and saying, “Hey, wake up. Let's get out of here.” And that was the end of tracking that record. But then came mixing which after more than a month just pushed me over the edge and resulted in a sort of nervous breakdown.

So yeah, it was fun and challenging and everything else I think making a good record should be, but it was also a colossal behemoth in my life which I simultaneously sought to preserve and protect the purity and raw nature of as well as tame and shape it into something that it, in a way, resisted becoming.

Whether I'll approach another record in that way ever again, I'm not so sure. Working with Marshall and Shannon has taught me a lot about pacing myself and being more patient with developing ideas. Being husband and wife and also amazing parents I think has something to do with it, and so I welcome and appreciate the influence their relationship and experiences have on both me and the band.

Marshall: Some songs are written from improvised jam sessions while others are based off of old Animal Hologram tunes that we take a new approach to. Often some of the band members have not even heard the older versions before they start adding their part.

Q. Which new bands do you recommend?
Jason: Dumbo Gets Mad, Gardens and Villa, Ghastly Menace, Beat Drun Juel, Melkbelly. Not all “new” bands necessarily, but bands which would probably be new to many people.

Q: Which band would you love to made a cover version of?
Marshall: No one.

Jason: Yeah, I'm not particularly interested in doing a cover record or forming a cover band. There's an acoustic guitar cover of Elliott Smith's, “Son of Sam” on ‘Phantasmagoric Menagerie’, though I don't think I'd want to do that again.

Q: What are your plans for the future?
Marshall: Keep creating music that pushes boundaries and that challenges our minds and souls.

Jason: What he said. I'd like to have a new record out by early next year, but right now I think the focus is on exploring the songwriting process together, creating and refining new material and performing it in front of as many interested audiences as we can this summer and onward.

Q: Any parting words?
Jason: Thanks for talking with us, and to your readers, I hope our words didn't bore you to death. If they did though, I recommend checking out our music before checking out altogether. If not anything else, it should be loads more entertaining than any words that come spewing forth from our mouths.
*
*
*
Thanks