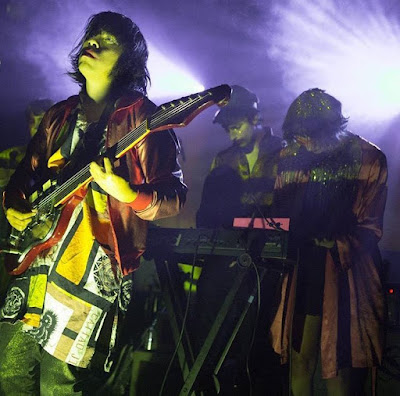 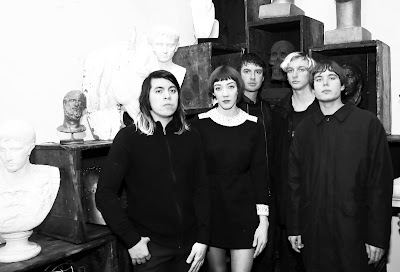 Q: Who are your influences?
A lot of different elements. We're always evolving. Changing our minds. Questioning ourselves. I dont think there will be a permanent fixture in our influences. Right now I've been listening to a lot of various artists from the 1980's a lot of them lo-fi projects and experiments from folks who didn't quite make it in the post punk and new wave scenes.

Q. How do you feel playing live?
It's never really the same feeling. Probably leaning towards being tense and angry. We're trying to be more fun these days (shrugs shoulders*).


Q. How do you describe Drinking Flowers´ sounds?
We've recently abandoned the use of live/acoustic drums and have used drums programs and drum machines instead. This has really brought us into a new dimension musically. I think David the man who mastered our last record put it best. It's "ambient but really groovy." I like synthesizer and guitar and well everything floating around for quite sometime before they disappear.

Q: Tell us about the process of recording the songs ?
There is no process, it quite honestly is chaos.

Q. Which new bands do you recommend?
Pale Dian (label mates of ours) really impressive three-piece from Austin. Our friends Part Time have made a series of amazing albums the past few years. We also have been really liking Cosmonauts, they're very strong live and I'm excited to hear their new album. Dinner is great! And you should also check out The Molochs.

Q: Which band would you love to made a cover version of?
HEAVEN 17!

Q: What are your plans for the future?
We're wary of the future. Hopefully make a few more albums before the world implodes.

Q: Any parting words?
We're moving to Berlin or Amsterdam if Clinton or Trump wins. So come say hello if that happens.
*
*
*
Thanks