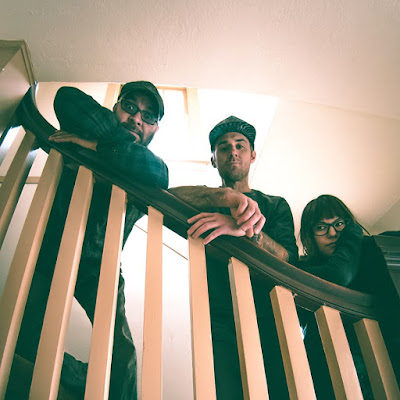 Q. When did Desert Graves start? Tell us about the history...
Chante: From my perspective, Desert Graves began through a Craigslist ad posted by Gabe when he was looking for a drummer and a guitarist. The ad listed influences like The Jesus Lizard, Unsane and Last of the Juanita's. I answered the ad with, "You had me at The Jesus Lizard". We clicked, the drummer didn't, but we lost touch. Flash forward three years and the Craigslist gods put Gabe and I back in touch through another ad Gabe had placed selling spare drum kit parts. It turned out that Gabe and Angela had been jamming and looking for a guitarist to join their dark psychedelic based rock project. Still desiring to have more organ in our sound, we finally nabbed Rachel who kills it on the keys and guitar. She’ll be on the next set of recordings doing a bit of everything.

Gabe: A lot of the time we just start jamming on a riff Chante or I brought that day, we all communicate well so writing songs is really fluid. There’s no single songwriter so it’s nice, a very collaborative process and we talk through a lot to improve the dynamics of songs.

Q: Who are your influences?
Chante: As a group, The Black Angels, K-holes, and TV Ghost were bands that had the sort of sounds we all liked and wanted to strive for but we're not really sure what the end result sounds like to other people or ourselves for that matter.

Q. Make a list of 5 albums of all time…
Chante: Christian Death - Only Theatre of Pain, Alice Donut - The Untidy Suicides of Your Degenerate Children, The Jesus Lizard - Goat, The Heroine Sheiks - Rape on the Installment Plan, Shellac - At Action Park

Q. How do you feel playing live?
Gabe: We’ve only played a few shows so far, but we’ve had a good time. It can be a struggle finding bands to play with us that are a good fit. We’re a little all over the place style-wise.

Angela: I’m always a bit jittery before any show and finally calm down about halfway through a set. Our home practicing setup is somewhat limiting in various ways so it’s nice to finally be able to hear everyone and to feel all the energy that comes from the songs.

Gabe: Aggressive and experimental, bottled up and drug induced

Rachel: A euphoric yet unsettling balance usually achieved on a blend of hard and psychedelic substances.


Q: Tell us about the process of recording the songs ?
Chante: Gabe is the DIY guy. He rigs up any house into a makeshift studio headquarters. Amps in the kitchen, amps in the living room, amps in the bedroom, drums in the living room, mics hung from the ceiling, we use all our legitimate mic stands until we don’t have any left and then we resort to propping mics up with boxes or other random stuff lying around haha. It's always been in a small space. Bleeds are inevitable.

Gabe: We keep it pretty simple and always record live, very little if any overdubbing besides the vocals, which we do separately. We also add some tambourine/maracas occasionally. Then we send the tracks to our buddy to mix and master.

Q: Which band would you love to made a cover version of?
Chante: I've always wanted to cover Going Out West by Tom Waits or When Tomorrow Hits by Mudhoney

Rachel: Shut the Door by Fugazi, Souvenir by Morphine, Smooth Operator by Sade

Q: What are your plans for the future?
Chante: To be impolite and evil.

Gabe: We have a whole album worth of material in the works and hope to record as a 4 piece soon, possibly find a small label to help us put something out or do a split EP with another kickass band. We also would love to incorporate a visual art element into our live shows and make some music videos or short films. We just want to create new stuff constantly, keep creating art and growing our sound and live show.

Angela: Make more music and maybe do a mini Northwest tour. Would love to hit up Portland, Denver, Seattle and Missoula sometime.

Rachel: What they said!

Q: Any parting words?
Chante: "No matter where you go, there you are" - Buckaroo Banzai
*
*
*
Thanks