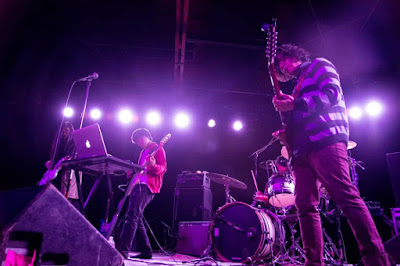 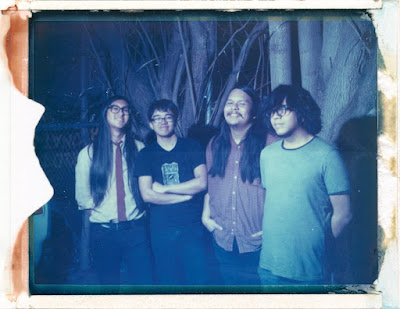 Q. When did Young Lovers start? Tell us about the history...
Mikey: The band started in 1991. Ford and I were born in the same hospital.

Ford: That part is true, but the band REALLY started in 2011. I was playing the final show of my band at the time and Mikey approached the stage and asked me, "hey wanna start a new band tomorrow?" how could I say no?

Mikey and I had played together in a couple bands in high school that didn't really get too far but at the time we were 20 and I was excited to play music with him again. We jammed a couple times and it didn't get too far with just the two of us. At one of those sessions Mikey asked if I wanted Josh in the band. I was kinda skeptical at the time like, Josh was and is still one of the best bass players i've ever seen or played with but at the time I was iffy about being in an all of Filipino band. Sometimes it comes off as kinda hokey or like a gimmick or something, but now i'm honestly so stoked that we're all Filipino.

Right after Josh joined we moved into the lockout we're renting at now and I'll never forget this but the first night we moved in we played together and we jammed Omnia for the first time. It came out of us all so naturally and we were all sooo excited. I remember getting to the end of playing it and half screaming and half laughing uncontrollably cause I couldn't contain my excitement.

Almost immediately after that our friend Karen was in the band and she played guitar and sang for us for a little bit. There's still a couple videos out there from that time period floating around if you look deep enough. Karen wrote the melodies you hear on our first album. She ended up leaving the band midway through 2013 and she's been making really amazing music since then and we're all still pals.

After that Mikey, Josh and I played as a trio for a bit which was really fun and in that time we recorded our album almost entirely on our own which was a pretty grueling but extremely rewarding experience for us. Around the time of our first release we asked Jonny to be in the band, which was an idea Mikey had been throwing around for a while and I can't even put into words how excited Jonny was to play with us.

Since then its been amazing. We've really grown as friends and musicians, we've created the best music our lives together, and we've played the best shows we've ever played together in this band and I wouldn't trade it for anything in the world.

Q: Who are your influences?
Mikey: Owen Pallett, Sufjan Stevens, The Fall of Troy; it's where i got my technique from.

Q. Make a list of 5 albuns of all time…
In no particular order for all of us....
Jonny:
1.) Kid A - Radiohead
2.) Summerteeth - Wilco
3.) And Then Nothing Turned Itself Inside Out - Yo La Tengo
4.) American Football - American Football
5.) Jeff Buckley - Grace

Mikey: All of Owen Pallet. Oh, and Fame Cult.

Q. How do you feel playing live?
Mikey: Like using the rooster talisman in Jackie Chan Adventures.

Josh: What Electric Light Orchestra etymologically SHOULD sound like.

Q: Tell us about the process of recording the songs ?
Jonny: Long; painful.

Q: Which band would you love to made a cover version of?
Mikey: A Spaceman 3 song. All of them.

Jonny: By Your Side by Sade.

Q: What are your plans for the future?
Ford: We've been woking hard on our second album but for now we got a ton of shows coming up!