Odds and Ends with Frana - An Interview 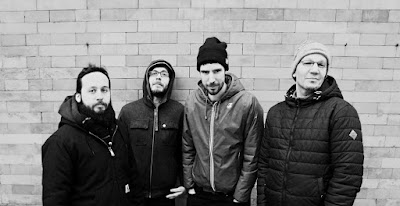 Q. When did Frana start?
Luca:​ It goes back to 20​11, Francesco and I sort of knew each other from Milan, we were both living in Munich and we had no friends​​​. We decided to start something like a band, but could have been also something else, like a dancing school or a scouting society, luckily or not it was a band.
But we were not quite well understood by the Münchner who had no clue about our "influences" and we were both bass players, so I bought a guitar... I skip to the end, the actual lineup is scattered around, I´m in Milan, Francesco B. as well, Sascha in Munich and Francesco S. in Florence. If it´s not complicated, we don´t like it ;)

Q: Who are your influences?
Fra​: it's hard to be short here...we're all quite eclectic listeners. I'd say basically all Touch and Go and Amphetamine Reptile bands as well as screamo bands from the 00s. Few names over all, well...We all like Shellac, Unsane, Don Caballero and Fugazi, but also Botch, Daïtro, Trail of dead...

Q. How do you feel playing live?
Luca: Mainly drunk, if not​​ pretty good, well, pretty good anyway. I like to talk lot of nonsense, I claim songs talk about silly stuff, like the cotton balls in the belly button or the queue at the p​​ost office. Sometimes I´m understood, sometimes not at all...people look at me like there´s something very wrong with us and sometimes they even ask me if the lyrics are really about that. No they´re not.


​Fra:​​ it feels good, I mean...it's cool. We like to establish a dialog with the audience, mostly based on gags...sometimes we are the only one laughing, though. But this makes it funny, before we eventually kill everyone's ears with the next unreasonably loud song.

Q. How do you describe Frana's sound?
​Luca: well, it´s quite hard to tell from the inside, most of the time I´m not even sure if what we write it´s good or not or which kind of influences it has, I describe Frana as pretty much the only music I can write​.​


​Fra:​ Frana is the multi-faceted result of what we ingest and experience. It's one possible way how we can work together in making music. I would say we are not entirely monotonous people, so that's what comes out...mixed tunes, mixed feelings. Have a look at the lyrics, you'll also get a feeling about the sounds, how we mean them.


Q: Tell us about the process of recording the songs?
​Luca: I can tell you the story of Odds and Ends' recording session. At that time we were all living in Munich and we decided to record at Trai Studio, near Milan, since he´s a good friend and one of the goddamn master of Italian noise rock. We decided to play two concerts on the way there... In something like 48 hours we had to drive 1000 km, play 2 shows, record 4 songs, while sleeping something like 0 hours. Never again...

​Fra:​ never again? Or maybe the same but 10 songs next time? We'll for sure go back there.

Q. Which new bands do you recommend?
Fra:​ hmmm...how new is new? Just out of my last week's hits, I'll go for Greys from Canada and our friends Opiliones from Germany.

Q: Which band would you love to made a cover version of?
​Luca: I´m not really a cover person, cause in principle I am not able to play anything except what I wrote... But maybe I´d like to cover School by Nirvana.​

​Fra:​ I'd like to try out Chartered Trips by Hüsker Dü or Eggshell by Autechre (whenever I can convince the others).

Q: What are your plans for the future?
Luca: ​The plan for the future is simple, make a juicy LP record, not that easy to write since we are far away from each other, but we are working on it and we have already some fresh material!

Q: Any parting words?
Luca: thanks a lot for the interview!

Fra: ciao! visit our bandcamp http://franafrana.bandcamp.com, where you can download our music for free. See you in Brasil one day (that would be actually incredible).
*
*
*
Thanks