Mission In Question with June Dreaming - An Interview 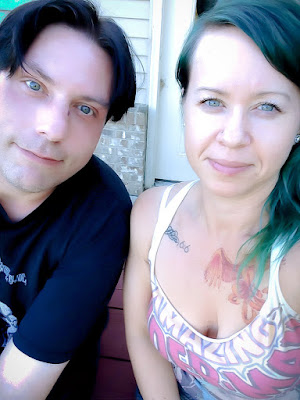 
Q. When did June Dreaming start? Tell us about the history...
Bruce Palmer: I originally began creating music under the name June Dreaming in 1997, writing and recording music under the name as a solo artist until 2014. During that time I released an instrumental album called "The Dark Symphony" which Jamie (vocalist) came across in 2013. She really liked my work and contacted me about working together and we have been a team ever since.

Jamie June: In 2014 I discovered Bruce's solo work on instantly fell in love. His music inspired me to reach out to him in hopes of collaborating on a musical project. After our first meeting Bruce asked me to be June Dreaming's permanent vocalist which I accepted. In October we released our first EP together, titled "Transitions".

Q: Who are your influences?
Bruce: My biggest influences are bands like Pink Floyd, Rush, The Smashing Pumpkins, The Cure...but I take little bits and pieces away from everything I listen to, whether it be Slayer or Madonna or Danny Elfman. I always key into something that I can take away from any given piece of music.

Jamie: I find inspiration in any form of artists, hardworking people that are not noticed. Those who are doing what they love and receive no reward.

Jamie: “Reincarnate” Motionless In White, all of the albums from Pierce The Veil, “When I Am God” Oh, Sleeper

Q. How do you feel playing live?
Bruce: Initially a solo project, and now a duo, we have yet to gather enough like-minded musicians together to actually get June Dreaming our in front of a live audience, which is extremely frustrating because it is a huge goal and the next logical step in our progression. As intimate and as passionate as as our music is in recorded form, I really think it would evolve to another level in a live setting and I can't wait until we have the opportunity to take that step and make it happen.

Jamie: I would someday love to do some live shows. I love the freedom of being crazy...screaming and singing on a stage. I'm not in a rush to do it though. I am happy with the direction we are going in at this point. It will take time to find a team that will mesh with us I am sure we will in time

Q. How do you describe June Dreaming sounds?
Bruce: Our overall sound is pretty heavily influenced by the 'wall of sound' philosophy. We like layers of sound and texture, we like to employ the use of sounds moving around in the stereo field a lot, using reverb and delay effects to create the illusions of space and depth. We particularly enjoy utilizing Jamie's voice as an instrument/effect, in addition to traditional singing.

Jamie: Out of this world.


Q: Tell us about the process of recording the songs?
Bruce: Every song is a little different but the process usually begins with me coming up with a broad outline of a song. I'll then sit down and work out the different parts and put together a rough recorded demo of the arrangement which I then give to Jamie. She works with that to create her vocal parts. Once we combine the two we have a good idea of where the song is going or whether we even want to pursue it at all. From there we start putting together a complete mix, re-recording parts as needed and fleshing out the final song. As for lyrics, I usually give Jamie a broad idea or concept and then she writes the words themselves. Every once in a while I will suggest something specific but most of what you hear comes from her heart. One notable exception where I actually helped with writing the lyrics is our song "Zephyr (Part 1)".

Jamie: Bruce sends me an instrumental demo and I create a melody for it. Sometimes I will lay the melody down first but other times I will find some background vocals first. Some of our songs I find two melodies to add. After that I usually record the vocals in pieces then bring the vocal tracks back to Bruce where he mixes everything together and adds or changes instruments to coincide with what I've come up with. From there we make any adjustments that seem fit and call the song complete.

Q. Which new bands do you recommend?
Bruce: I haven't paid much attention to mainstream music in quite a long time. I think the last two mainstream bands that I got into were Metric and Coheed And Cambria, so check them out. I listen to a lot of unsigned and underground music now. Mainstream music is all designed to fit nicely into a certain mold so everything gets stale and repetitive very quickly to me. With underground music there is no end to the variety, and with so many music websites available the the internet makes it very easy to find new stuff.

Jamie: I couldn't really consider her a new artist, but I know she's not well known for her music so check out some of Milla Jovovich's music. It's different and creative. She is one of my favorite actresses and when I found out she did music as well I had to listen! She did some music for the movie Underworld - it's an awesome, dreamy space pop song.

Q: Which band would you love to made a cover version of?
Bruce: We throw around ideas for songs to cover all the time but so far we haven't actually sat down and done one yet. We've discussed dozens probably, some of which are Joe Walsh (The Confessor), Mark Crozer And The Rels (Broken Out In Love), The Bangles (In Your Room), Coheed And Cambria (The Crowing), My Bloody Valentine (When You Sleep) and a lot of different songs from the 1980's.

Jamie: I am a hardcore fan so I would love to do A Day to Remember's “2nd Sucks”. This song is super fun to dance to! I would like to sing “Abigail” by Motionless In White because this song is my favorite from them and it means a lot to me. I would also love to do “Stinkfist” by Tool.

Q: What are your plans for the future?
We are currently completing the last few songs from our upcoming 3rd album "Abandon The Mothership". Beyond that, we have literally 8-10 full length albums of material to work with, so we are just getting started!

Q: Any parting words?
We would love to thank our fans whose support at times has been absolutely overwhelming. We wouldn't be where we are without your support and encouragement, and we are very thankful for each and every one of you!

Listen to and buy June Dreaming music at www.junedreaming.bandcamp.com
*
*
*
Thanks