Primary Feelings with Lancastell - An Interview 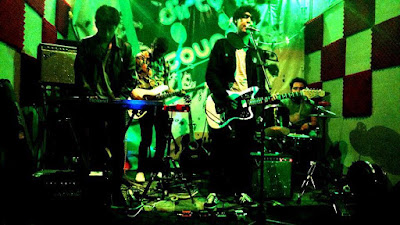 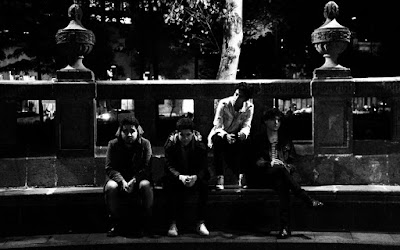 Q. When did Lancastell start? Tell us about the history...
Lancastell starts in 2014, the drummer and bassist were in a post punk band called “Moon fiction”, they wanted to start a new project with another influences, and where so many local bands who sounds like the old Post punk bands. They decided to call Osvaldo Gonzalez (guitar/vocals) to work in a few demos, that’s how it born Lancastell, playing a few dream pop songs in the live gigs and working constantly in new sounds, based on the current noise bands.

Q: Who are your influences?
We have very different influences between each other, Mauricio (synthesizer and percussions) loves the electro pop bands of the high record labels; he is also, very close to the local bands influenced by the current dream pop sounds. Kevin (bassist) and Omar (drummer) loves the punk rock sounds of the 90´s and early 2000, that was his first motivation to make music, they also, follow old bands like The chameleons, The sound and current bands, like The soft moon, Soviet Soviet, Ceremony and Motorama.

Osvaldo grows up with the brit pop bands of the 90´s, (Suede, Seahorses and The charlatans), he is very influenced by the bands of “Sarah Records” label, and the first shoegaze bands like Chapterhouse, Adorable, The Boo Radleys and Swirlies, and other early sounds like Teenage Jesus and the jerks, Spectrum and Suicide. As a band, we love the latest records of Deerhunter and The Radio Dept.

Q. How do you feel playing live?
Every time is different; we use to play in very small venues, with bands that plays cover songs. Its been, since always, the same excitement thoughts, always like a therapy, we are very fortuned to do that we do; recently, we feel funny about the connection with our public, we are selling a show, a connection, several feelings, and that´s the gorgeous responsibility that we ever had.

Q. How do you describe Lancastell sounds?
We start sounding like the post punk revival bands in our local scene; now, we are kind of overwhelmed by the revival sounds, we don’t like to think in make a shoegaze song, a noise song, a new wave song; we just make songs based in the mix of our influences and personal feelings; and maybe, that give us a Dream pop/noise pop tag.


Q: Tell us about the process of recording the songs?
Our current EP is recorded in a local studio, called Black bedroom, we were play that 6 songs in our live gigs and we decided to put them in a formal record, with the conventional process of mastering. We are planning to make some LO-FI demos and record our next work in another Mexican studio.

Q. Which new bands do you recommend?
Mexico is charged of new bands, new sounds, new talents; we tried to know and make contact with all that bands, it’s like a society, sharing the shows, the public target, the ideologies and the personal empathy; we love the sounds of “Bellenger” and “I can fly”, who are involve in Post punk revival sounds, they have a very honest material. We also follow and recommend “Oceanss”, Has a shadow”, “Buried under stars”, “Mint field”, “Sadfields” and the giants “Vaya Futuro”.

Q: Which band would you love to made a cover version of?
We use to play a cover of “On our honey moon” by The wake, and “Night in June” of Linear movement (Autumn), which was like an experiment, because that’s songs are made with synthesizers and drum machines; now, he think a lot in make a version of “Winona” by Drop Nineteens or some classic song of Suicide.

Q: What are your plans for the future?
We are finishing the promotion of our first EP, we are making new song and deals to play out of our land; we want to record in October and make some shows and a tour with our local bands.

Q: Any parting words?
Thanks for pay attention to us, it’s a huge motivation, and thanks to all the people who are buying our music, a dream come true.
*
*
*
Thanks