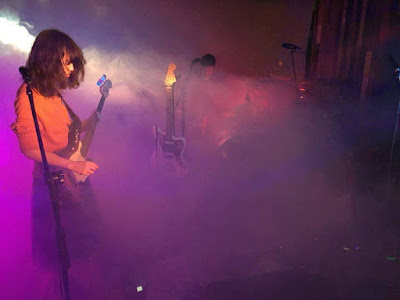 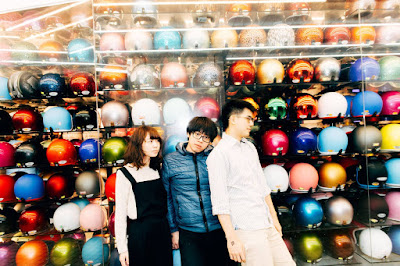 Q. When did Super Napkin start? Tell us about the history...
Yau: Super Napkin is a power trio with me (Yau) on guiar/vox, Nicole on bass/vox, and Vinnie on drum. We used to be in different bands and only started playing together in late 2014. Originally it’s Nicole and I writing some silly tunes at home just for fun/practice, but some of them were stuck in my head. They didn’t quite fit into the other band I’m in (Slack Tide), so I asked Vinnie to drum and see how those tunes sound like in a proper band. Several of them are still kept on this record. As a group we played well with each other and came up with the other half of tracks on the record pretty fast. That’s when we started to consider gigging and recording our first album (Rhythmic Lizard Moon) more seriously, keeping the band going and see how far it can go.

Q: Who are your influences?
Mount Eerie/The Microphones, Eric’s Trip, Yo La Tengo, My Bloody Valentine, Sonic Youth, and Bob Mould just to name a few. There are also many local indie bands in Taiwan that inspire us hugely, not necessarily on music, but on making music independently.

Q. How do you feel playing live?
We love playing live. As a trio it’s pretty intense yet free at the same time. Little adjustments on sounds here and there can make huge differences to the room and crowd, so most of the time we need to be absolutely focused on the sound and react instantly. The concentration and direct interaction with the listeners is an exclusive experience only happen to us during performing live. Our day jobs, similar to most office workers, are pretty trivial and separate us from the other human beings emotionally. Live is a therapy process.

Q: Tell us about the process of recording the songs?
We did it all on Garageband ourselves except for mastering, which is done by West West Side Music in the US.. Drums are all recorded in a public rehearsal room we rent and practice most of the time. Guitar/bass/vocal are all done in my room. We only have some basic recording gears, such as Scarlett 2i2 audio interface, three audix mics, macbook, and several Sony and Bose headphones.

Q. Which new bands do you recommend?
For local bands, I’ve been listening to U.TA, No Party for Cao Dong, Acidy Peeping Tom, and Wayne's So Sad a lot. For Western bands, Solids, Elvis Depressedly, and Tony Molina (not exactly new I guess) caught my attention.

Q: Which band would you love to made a cover version of?
Pixies, just for shouting.

Q: What are your plans for the future?
We’ve been making progress on the materials for the second album. Rhythmic Lizard Moon is only streaming online for the moment, and we want to get it printed someday, alone with a new album.

Q: Any parting words?
Thanks to TBTCI for inviting us to do this interview. It is a rare chance for us to introduce Super Napkin and Rhythmic Lizard Moon to the audience outside of our circle in Taiwan. If you like it, welcome to download the full album on www.supernapkin.com. We’ve also worked with a talented director friend and released a music video, please check it out! https://youtu.be/uoLYfKt-l38?list=PL-sOS6nB4CD3moZT-Qbs9PhdFlNCB_X5n
*
*
*
Thanks