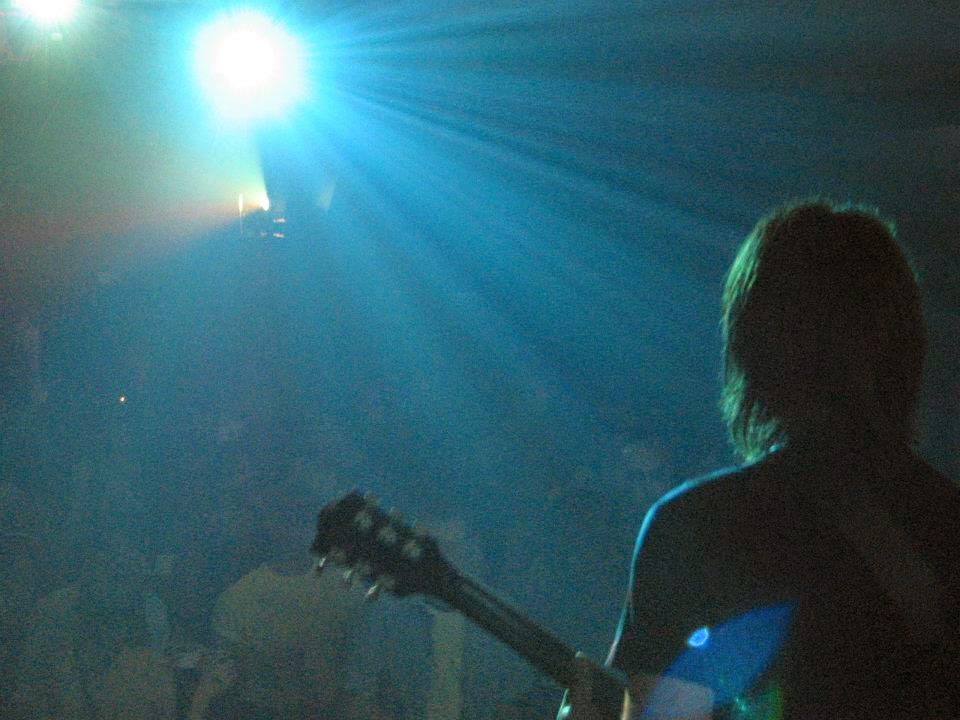 Q. When did Aspen Woods start, tell us about the history...
I’d played in a few local Bristol bands as a guitarist when I was starting out. There was a certain period in my life between 2001-05 where I was switched on to a few things which were pretty inspiring for me, it sent me in a different direction as a person as well as a musician. This batch of songs just suddenly flowed out of me from nowhere in quite a short period. Feeling pretty inspired by what I’d come up with I recorded some demos myself and then went about getting a group together consisting of a few friends. We started out playing the Bristol scene and within our first year (around 2006) we started recordings, which would eventually become the debut album (New World Disorder) released in 2008.

Q. Made a list of 5 albums of all time…
This is tricky. For me, as I’m sure for most people, a top 5 would be ever changing. I’ve decided to personalize it and give you 5 albums, in order of me discovering them, that had a deep impact on me as a musician/writer in so much as they have always stayed with me, or have sent me off in a certain musical direction.

1.U2 - Achtung Baby (1991)
Say what you will about U2 (and many do!) this album will always be special to me as it got me into and excited about guitar music as a young teenager. At the time (early 90’s) I was purely into Hip-Hop and Rave(!) and a friend gave me a copy to listen to. I was fascinated by the production and especially how the guitars sounded. Edge as a guitarist is criticized by the snobs for his style which relies heavily on effects and studio/live production over technical ability, but I’m of the attitude that if it works then who cares? His approach has affected the way I look at guitar to this day. Nirvana’s Nevermind came out the same year, which was a completely different animal, and once I heard that too I soon enough was picking up the guitar (and the effects board!)

2.Brian Eno – Another Green World (1975)
It was through Eno’s production work with U2 that I got into his own work. I’m a big fan of his ambient work but also love his earlier more conventional song-based (but still pretty abstract) stuff. This album seemed to be a bridge between the two forms (for both himself and me I suppose).

3. Spiritualized – Pure Phase
I used to be a bit of a loner when I was a teenager and I’d often stay in my darkened room (I had three different 25w light bulbs – one red, one green and one blue that I’d interchange depending on my mood!) listening to the radio. I was lying in the gloom one night and I heard the song ‘Let It Flow’. It was one of those songs that just took me somewhere else, nothing else sounded like it at the time. Not long after that a friend and I were approached by a random guy in the street who tried to sell us a pair of tickets to their Bristol show, after we showed him our empty pockets he ended up giving us them for free as he said that he’d had enough of trying to get something for them (fortunately for us this was pre-ebay!). We went to the gig the next night, Seefeel were the support if I remember correctly which set the mood perfectly. It probably still remains my favourite live show to this day. I think they were sonically the best live band around during most of the 90s as far as guitar music goes.

4. Labradford – Prazision
I didn’t really know that much about Labradford when I came across this album, I still don’t now that much now. They are a US band and I think this was the first release from the Kranky label, but that’s about it. There’s just something about this as a whole album that does it for me. The production is pretty lo-fi but the mood is pitched perfect. I’m not sure they are still releasing stuff or not. They really should be working in film-scoring (maybe they are!?)


5.Swans – My Father Will Guide Me Up A Rope To The Sky
I’m not sure if it’s that I get more cynical as I get older or that music of any substance is becoming more rare, but I find it extremely difficult to get excited about much contemporary music. This album was an exception. This was the first album from Swans of their recent resurgence, and I have to admit that I was pretty much unaware of them prior to it. The following two albums are just as good for me, but this was the album that got me into them…in fact it was when I saw them perform live at London’s Alexandra Palace a few years back following the release of this album that they really hit me. A truly exhilarating and genuine live band that really mean it. Immense. 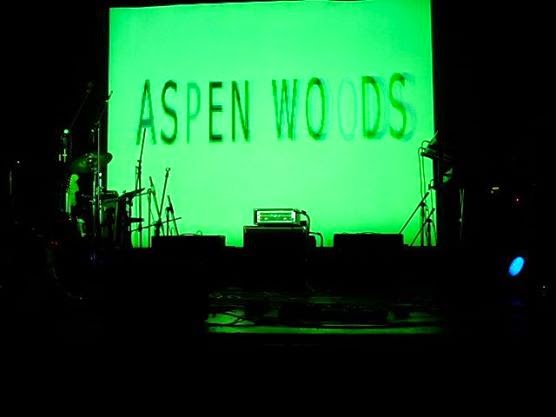 Q. How do you feel playing live?
I love to play live. It’s where I feel most alive and everything else melts away. I enjoy writing and recording in a different way but these are the things I have to really work at, the tilling, sowing and planting. Playing live is like enjoying the fruits of the harvest.

Q. How do you describe Aspen Woods’ sounds?
It’s been described as Psychedelic Rock and also Shoegaze. I suppose they are both true in some ways but not really through design. The newer material I have written has more of an electronic sound, less guitars and more synths. I think my influences are pretty clear, which I’m not ashamed of.

Q: Tell us about the process of recording the songs?
Well the debut album was as I said mainly written by me as a bunch of demos, which we preceded to flesh out with live band sessions and overdubs. That album was mainly produced and engineered by two different friends in their studios in Bristol. I’m proud of that album but in hindsight there’s a lot I would have done differently, both from a songwriting and a production viewpoint. That said I don’t believe anyone can ever be 100% happy with a release and it seems you never really finish. All you can ever do is learn from the experience and try to enact changes in how you do things next time.

I found with the debut that for me it isn’t about me just being a performer of the songs, where someone else captures and interprets them. I needed to be more involved in the production side. So I’ve now pretty much completed a whole new album of songs, which I’ve written, recorded, produced and mixed myself. The only downside of this method that I’ve found is that it’s usually good to involve others if only that they can tell you ‘it’s finished’, or ‘yes’, or ‘NO!’. That said, overall I’m far happier with the end results.

Q. Which new bands do you recommended?
Well I would have to say fellow Bristol band The Fauns – but I am biased being that I’m actually a member of the band! But seriously, even if I wasn’t I’d be recommending them to you. Funnily enough Michael Savage (bass player and founder of The Fauns) was getting The Fauns off the ground whilst he was playing bass with us in Aspen Woods, and before I knew it I was playing guitar in The Fauns. 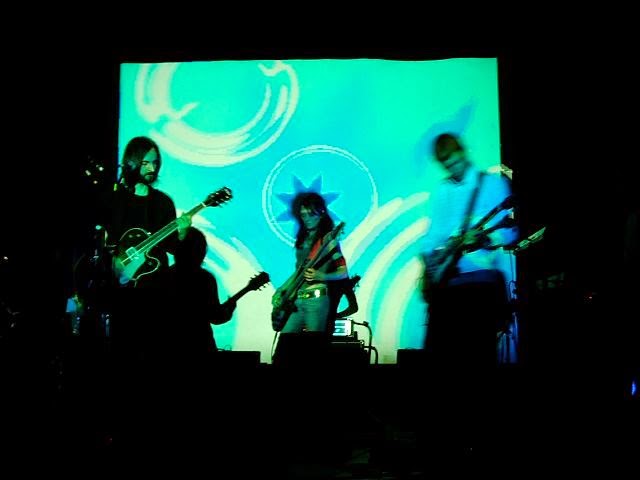 Q: Which bands would you love to make a cover version of?
I’d love to have a crack at doing a version of Vangelis’ ‘End Titles’ from Blade Runner OST, but with less synths, more guitars and add a vocal line maybe…hmm, maybe not.

Q: What´s the plans for future....
I’d like to think I could get the new album out before the decade ends! Seriously though the completed unmastered new album has been sitting on the shelf for the past two years and I have no plans (or a label with plans for that matter) to do much with it yet.

The Fauns are my main focus as far as recording and playing live go at the moment so we will see. When I do get around to releasing it I definitely plan perform it live.

I did put one new track from the new album up on my Soundcloud page some time ago. It’s called ‘All Is Truth’.


Q: Any parting words?
Search ‘Strawman’ and ‘Legal Fiction’ on Youtube. Then follow the White Rabbit…
*
*
*
Thanks Lee