Blown a Wish with Luna Ghost - An Interview 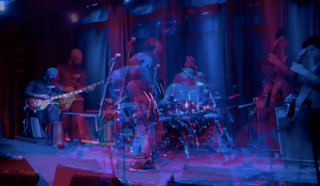 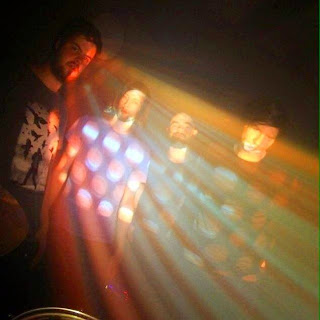 Q. When did Luna Ghost start, tell us about the history…
Sean: I told Robbo (Chris) to be in a bad with me.

Chris: A few years ago myself, Sean and our good friend Eddie were in the car. I was sitting in the back when they turned around and said "Oh by the way man, we decided we’re making a band and you’re gonna be the front man." I didn’t really have a choice in the matter. They were both pretty accomplished at their instruments already and I had barely been playing guitar for a year or two, and never sang in my life. So it started from that point. We had a couple of jams where we just tried covers but lucky we never played a gig like that. Then we got Patto (bog) on the bass and started making our own stuff which luckily has never seen the light of day. It took a while before we started playing gigs though by which time Eddie left and Gus came in. We then started playing live until after a while Gus left to do his own music, i cried a bit but then we were lucky enough to get Pete who slotted in nicely. But then he shaved his head and looked like Dwalin form the Hobbit.

Q: Who are your influences?
Sean: I love anything psychedelic and/or noisy. My main influences are The Black Angels, Tame Impala, My Bloody Valentine, The Black Ryder, T.Rex, Spacemen 3, Queens Of The Stone Age, Nine Inch Nails, Smashing Pumpkins but I also love electronic music, most especially Chemical Brothers, Gorillaz and M O O N.

Chris: I tend to listen to only a couple of bands at one time and get way too into them until I have to listen to something else. I’m kind of obsessive like that. I’ll listen to an album five or ten times over before changing it and get to know the layers under the layers and little mistakes that've been left in the recording or gone unnoticed. Bands like BRMC, BJM, MBV, Primal Scream, The Black Angels have been on that kind of rotation for a long time. There’s a heap more but they’re probably the main ones that have stuck as influences. More when the band started it was also those 90s alt bands like Smashing Pumpkins, NIN, Sonic Youth and QOTSA was also a big one.

Q. How do you feel playing live?
Sean: I love playing live because its chance to show another dimension to the song. Eventually we want to incorporate lighting and visual effects to our shows to enhance the atmosphere.

Chris: It can be great fun but you have good shows and bad. (yeah na) We try to laugh when it’s bad but sometimes it sucks too much and we hate ourselves. When we get into a groove it’s good though. We like to play loud but we’re slowly learning (mainly just me) that a good mix is better than an amp punching you in the ear drum. But i think the other guys know that already. It also depends on how the crowd is feeling. Which also depends on what night of the week it is, the venue, the weather, how our amps sound that night, if we just came straight from work, If Patto’s had his second double shot Dare ice coffee or not. That kinda thing. But we love playing stuff like off chops house partys or the Kwingy 500.

Q. How do you describe Luna Ghost’s sounds?
Sean: Getting loaded and driving across a desert 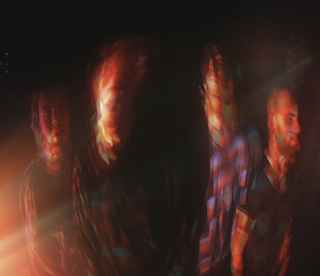 Q: Tell us about the process of recording the songs? Chris: I’ll make the demos in garage band with all the instruments and a drum machine, then take it to band trainin' a year or so later, we'll do some laps and push ups, then once the band are warmed up they'll usually make the song better. My favourite part is when someone improves on the song or thinks of something i never would. Then when we’ve played it enough times and changed some little things we’ll record it properly. The EP we have out was done with the drums in the studio and the rest in Sean’s bedroom with one mic. It was a great learning experience for us to have a go at doing it ourselves.

Q. Which new bands do you recommended?
There are so many just in Melbourne alone. We are still yet to discover a heap of bands but some we really love are The Grand Rapids, The Citradels, Contrast, Flyying Colours, Buried Feather, The Murlocs, King Gizz, The Dead Heir, Hideous Towns, Lowtide, The Grease Arrestor, Bloodhounds On My Trail, The New Pollution, Hollow Everdaze, Wintercoats, Breve, Manta 5, The Indian Skies, Miniatures, Lunaire, Fire Behaving As Air, The Rolling Blackouts, Rabble Rouser, Trash Fairys, Magic America, The Gooses, Gondola Kid. A heap more i’ve probably forgotten the most obvious ones.

Q: Which bands you love to made a cover version?
Chris: One day we’re gonna play a full gig of the Citradels songs and advertise it as The Citradels then play really poorly. We’ll wear sailor t-shirts and stupid sunnies with bowl haircuts.

Q: What´s the plans for the future….
One more EP then start doing albums. The next EP and first album are written, we just need a little bit of time and some cash then we’ll get it done. I feel anxious having all the songs sitting there in demo form ready to go but we wanna do it properly. Until then we’ll keep doing shows and try get around a bit more. Outside of Melb would be good for once. Probably end up making a music video for every song on the EP as procrastination.