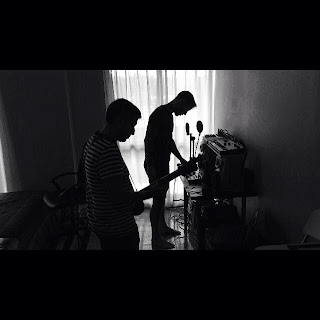 Q. When did Scene Noir start, tell us about the history...
A. Scene Noir began around the end of 2010, after the band I was playing in (Dark Digital) split. I’ve always been a punk at heart… I grew up listening to a lot of euro-punk bands like Conflict and Berurier Noir, but at the same time I was exposed to Depeche Mode, Front 242, Sisters of Mercy, and Joy Division. Looking back, it was only natural that Scene Noir would happen.

Q: Who are your influences?
A. That’s a tough question; I’m into so many genres of music. Dave and I have been listening to a lot of 90’s music these days… old Sonic Youth, The Wedding Present, and Slowdive…I can’t help but think some elements might spill over onto the new songs.

Q. Made a list of 5 albuns of all time…
A. You’re killing me…I have the decision making skills of a squirrel crossing the road but ok, here’s my best shot

Q. How do you feel about playing live?
A. I have a love/hate relationship about playing live. I’m an introvert, so it takes a lot of energy for me to get out there… but at the same time, it’s the digital age where anyone can sound like anything on a record. I think live music is music in its purest form and it’s necessary. Since Dave has joined the band, it’s been different though. We jam off each other and trip out a bit… I don’t think I mind it as much. I’m on another planet up there, and not a whole lot matters. I don’t care if it’s perfect or not anymore, it’s just a good trip.

Q. How do you describe Scene Noir sounds?
A. For a long time Scene Noir was a mainly a synth project, but I don’t think that’s true anymore, especially with more and more guitar making its way onto the songs. I think it’s got more soul now, and less structure. It’ll always have some synth elements, and electronics. It’s mood music and there are a lot of different moods in life. 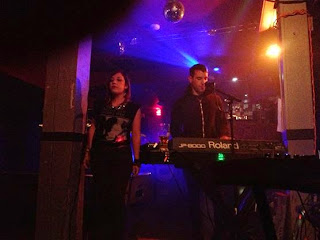 Q: Tell us about the process of recording the songs?
A. We’ve actually been doing something a little different this time around. I’ll program a loop into the drum machine and we usually just jam on it for hours and record everything. Then we’ll go back and pick out the parts we like, and build on them. If you’ve heard “Waves”… that track was the first take in a jam session, and I just cut 4 minutes out of it and recorded some vocals over it. It feels natural that way, and you never really know where it’ll take you.

Q. Which new bands do you recommended?
A. We’re so lucky to be in Montreal. The scene has been brewing for a few years now and there are so many talented artists. Void Republic, Low Factor, Essaie Pas, Violence, Brusque Twins, Police De Moeurs… fuck this list could go on for days. One of my friends has a new project called Besatzung and it’s golden as well. You guys need to check those bands out.

Q: Which bands/songs would you love to make a cover version of?
A. I think Echo and The Bunnymen’s “The Cutter” would be fun, yeah.

Q: What´s the plans for future....
A. I just want to learn, create and play as much music as possible. To keep jamming and see where things go. I want to see the music progress, and to be able to express myself through it. I want to play with more people, and experiment with different sounds. As long as it keeps making me happy, I’ll keep making music.

Q: Any parting words?
A. I’m so blessed that anyone listens to what I’ve written, and I just want anyone who reads this to know that I’m aware and I’m thankful. I wrote most of my music in a dark corner of a basement… so the fact that it’s made its way into someone’s radio show or mixtape is really fascinating. I feel the love, and I just want people to know that I appreciate every play, every message, and every minute someone spends devoting their attention to me or my art. Thank you all.
*
*
*
Thanks Andrew