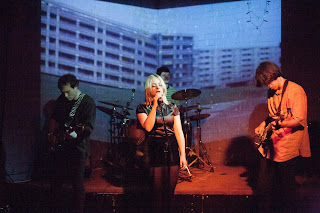 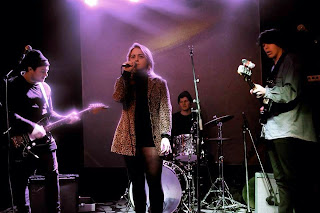 Q. When did Hideous Towns starts…
A. Ryan and Chris are long time friends and have always played music together since high school. One day they decided a drummer was required. Ryan used to work at they same place as my mum and she mentioned to him I used to play drums. Then maybe a week to two later they both came over to my house and we started playing some sub par guitar pop songs. We found Alana on a music website, she had just recently moved to Melbourne, didn't really know too many people and wanted to join a band and become part of the local melbourne music scene. Ryan spoke to her then she came over to our house the next week, we showed her some rough demos and song ideas. We immediately knew she was an incredible singer.

Q. Who are your influences?
A. Each one of us has influences in common with on another and some that are a little uncommon for the style of music we play. We all really like The Cure, Chris is into bands like Smashing Pumpkins, Interpol, My Bloody Valentine. Alana likes lots of 60's stuff like The Kinks but also Joy Division and some synth dark wave and punk stuff. Ryan's into more guitar based bands like Ducktails, Beach Fossils and Wavves. I guess I enjoy The Smiths and some synth stuff, as well as other 80's bands like Talking Heads.

Q. Made a list of 5 albuns of all time
A. We're all into different styles of music so this was kind of a tough one. Also our top five is continuously changing. Albums we listen to regularly are (In no particular oder):
Television- Marquee Moon
Mac DeMarco-2
The Smiths- The Queen Is Dead
David Bowie-Low
Wu Tang Clan- Enter The Wu Tang (36 Chambers)

Q. How do you feel playing live?
A. There has been a few shows where we have all played kind of terrible or there hasn't been many people there, or maybe the sound wasn't too good, those ones never feel too great. Then there are shows where everyones dancing and having fun and all our friends come along. Those shows feel really good and are always a lot of fun.

Q. How do you describe Hideous Town sounds?
A. The sound can be very dynamic at times, both in volume and tempo. We have some more up tempo, noisy post punk type tracks. However, also slower songs that continuously ascend and descend as the piece progresses. Some songs are in major keys and have certain pop characteristics, others in minor keys and sound the complete opposite to the pop type tracks.

Q: Tell us about the process of recording the songs?
A. Our earlier tracks 'Joy' and 'Don't Look Up' we just recorded and mixed them ourselves at home. Those two were pretty care free, we were just having fun recording one summer and they turned out pretty good for some home recordings. Those two were mastered by our friend Errol Green. With this new EP we had already been playing all the songs for quite some time, so there was no time wasted trying to figure out melodies or any parts. We recording it with our friend and ultimate legend Matt Hosking at Birdland studios. On some of the songs we would track the drums first then bass, guitars then vocals. On others we recorded drums, bass and main guitar all at the same time, then worked on overdubs for guitars and bass. Then record vocals separately. Matt and Linsday Gravina then mixed and mastered it and made us sound better than we actually are. 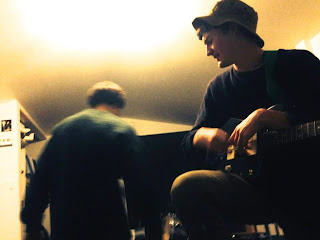 Q. Which new bands do you recommended?
A. There are so many great bands in Melbourne right now. Contrast, Bad Family, Miniatures, Lowtide, Luna Ghost, Breve and Nun are all ridiculously good.

Q. Which new bands do you recommended?
A. Also VHS dream are really good too

Q. Which bands you love to made a cover version?
A. Recently we covered White Rabbit by Jefferson Airplane a few times . That was really fun, apart from that we haven't really played any other covers. It's always harder to learn other peoples songs as opposed to writing your own.

Q: What´s the plans for future?
A. We have our EP launch at Boney on the 22nd of November with our friends Bad Family, Zig Zag and Basic Spirit (Contrast). After that we're going to record a new single called 'Heart Attack', we wrote it just after we had finished recording the current EP but didn't really have any more money to record another track.

Q: Any parting words?
A. Matt Hosking is a legend
*
*
*
Thanks guys