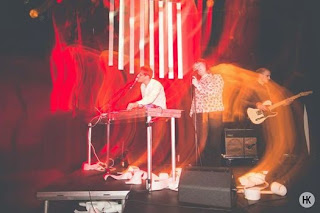 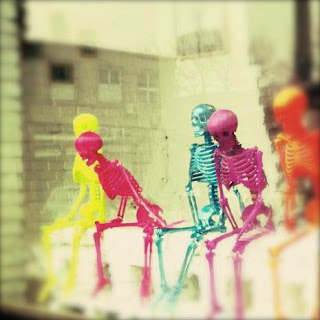 Q. When did Closing Eyes start, tell us about the history...
A: I used to be the main driving force in a band called Lovecult, but for various reasons we decided to call it quits just after releasing the debut album. I basically decided to continue Lovecult as Closing Eyes. I had invested too much artistic devotion in the project. We did an album I’m pretty happy with where a lot of great people were involved. Ådne from 120 Days and Emil from Serena Maneesh helped us record and produce it. Sonic Boom even did one of the mixes. Having been the main songwriter and visionary at the same time as being one of the songwriters in another Norwegian outfit Maribel, I desperately needed to leave democracy for a while and try to pull something off on my own. So this is sort of the continuation of Lovecult, but without the cult. Check out the album though, it’s cool!

Q: Who are your influences?
A: Too many to mention them all, I guess. Music I’ve listened to, art I’ve experienced, people I’ve played and recorded with. The usual. But if you want music that’s been important to me, I have to mention bands like Broadcast, Spiritualized, Stereolab, Air and The Dandy Warhols as very influential. I mean I just totally loved these bands, and they’ve all been sort of a point zero..

A reference point from where I obsessively tried to figure out whatever influenced them as well as other bands they’ve influenced. I’ve discovered so much fantastic music through my hang ups on these bands. I really love to dive deep into musical archeologic discovery trips!

Q. Made a list of 5 albums of all time…
A: That’s just too hard, but I’ve been obsessing over these records for very long, so: - Broadcast // The Noise Made By People - Spiritualized // Lazer Guided Melodies - Dusty Springfield // Dusty in Memphis - Stereolab // Dots and Loops - Portishead // Third

Q. How do you feel playing live?
A: So far with Closing Eyes, a bit stressed actually. I usually just really enjoy playing live, but I’ve got way more to keep aligned and to be in control of performing these songs. When everything goes the way I want, it’s great! It feels really fluid and loose. But it’s an awful lot more to think about compared to just singing, playing guitar or keys or whatever. Live shows with Closing Eyes is just me on vocals, synths, samples and drum machines plus a guitarist who adds a touch of beautiful organic flair. Occasionally there’s another vocalist as well. I sometimes miss the way a full band can influence you to change directions live, but then again I’m free to do whatever I want with this setup. You gain some and you lose some compared to playing as full band with lots of people, but it’s fun to be able to pull things in the directions I feel like going when I play.

Q. How do you describe Closing Eyes sounds?
A: Hypnotic, loopy, synthetic yet organic. Fluid, dreamy, rhythmic and trippy.

Q: Tell us about the process of recording
I try to get as much as possible down whenever I’m on a great creative flow. I can sort of hear it if the ideas came naturally to me, or if I had to labor them when I listen afterwards. There’s a magic in what happens when it just works. I don’t know what does that. I’m constantly creating loops and beats and small melodic lines, and I sort of try and collage them together. Whenever I get a feeling or a sense of the direction things are going I just sort of piece things together in an arrangement. But once stuff gets to that point I can get really obsessive and work for ages on every little detail.. 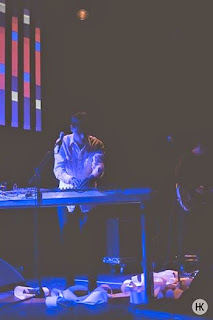 Q. Which new bands do you recommended?
A: I’m not really the one to be on top off what’s new and happening. I sort go in all directions all the time. My current hangup is actually Bossanova. You know, Jobim, Astrud Gilberto, Chico Buraque and the sort. But of current stuff I’ve listened to and really enjoyed I have to mention stuff like Dean Blunt, Flying Lotus, Morgan Delt, Todd Terje, Peaking Lights, Tomorrow’s World, TM404 and Control Voltage Khomeini.

Q: Which bands you love to made a cover version?
A: Lately I’ve been thinking about doing a cover of Boadcasts “Long was the year”. I have some ideas on that one I’d like to explore, but I don’t know if it’ll pan out to anything good though. I’ve done some covers, but most often I find that I’m not doing the song justice. I have like a scrapheap of sort of failed cover attempts.. I’ve been working on a cover of The Telescopes “Silent Water” for a good couple of years now.


Q: What´s the plans for future....
A: Discover more great music, finish another single, finish another EP, finish an ambient release I’ve been working on and off with for ages, do more collaborating, remix more, play abroad, stay busy. Q: Any parting words? A: Closing eyes sound labs will demonstrate our way of sound. Of quarter-sounds and lesser sounds. Haunting melodies for the contemporary mind. Diverse instruments of any kind. Obsessive compulsive loops oscillating in and out of time. We do small sounds as well as deep. We make diverse trembles and warbles which we repeat and repeat. We also have strange and artificial echoes, reflecting the voice many times. Some shrill and some deep.. Tune in, fade out, repeat..

Thanks for the kind words and support!
*
*