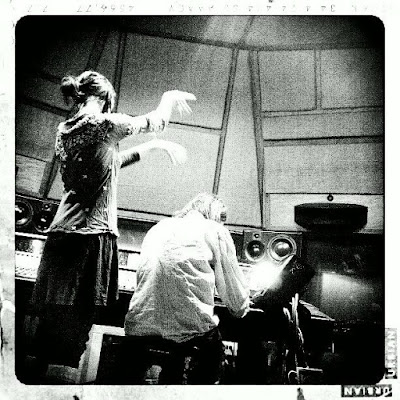 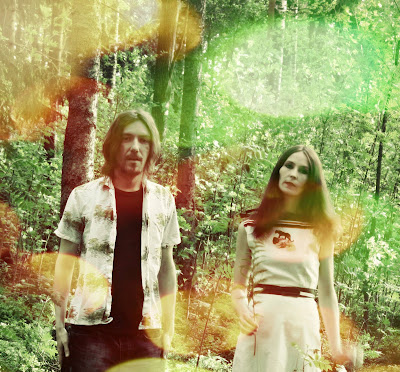 Q. When did Flying Cape Experience started, tell us about the history...
Jo: We are a duo, a couple. Some years ago vocal melodies started to appear in my head and I started to record them because those came so many. I thought there must be some reason for that. I had never thought I would make music. I have no musical studies or haven't played any instruments but Finnish traditional instrument kantele, when I was little. I have only been a music enthusiastic listening to music a lot. My husband (Akira), who is a recording engineer and has played guitar since he was a child, had dreamt of two of us making music together. So I recorded these melodies secretly from my husband. When I was brave enough I played those to him and then we started to create together. We became Flying Cape Experience. Everything has happened naturally. We just released (21.6.2015) our second album "We're all gonna die" through Portuguese indie netlabel El Vals del Conejo. We released our first album "Let's sing more about the eyes" through the same label on 2013.

Q: Who are your influences?
Jo: We don't consciously try to get influences from any artist. I love silence and the sounds of nature. Life is so hectic. I listen to music very little. I need my silence and peace for the creative processes that go on and on all the time. I don't want to get any influences! It would be interesting to know what kind of music one would make if she/he had never heard any music… But we both have listened a lot to rock bands like Stone Temple Pilots, Nirvana, Soundgarden etc. We like The Verve and some of the brit pop bands. We like NIN, TOOL, Deftones, Elliott Smith, Mew, Beck, Massive Attack, Radiohead…We like a lot of music from different genres. If it sounds like a heart is bleeding, the better, I'd say. We have listened to lot of 60's and 70's music in our childhood, influences have come from there subconsciously. I really can't say that I hear any of the bands I mentioned in our own music though. But in our album reviews writers have heard similarities to for example The Cocteau Twins, Spacemen 3, This Mortal Coil, Mazzy Star, Sigur Ros, Portishead, Björk and Kate Bush. It is really interesting because I have listened to only two of those! So we have accidentally become ... shoegazers, for example! But that's not everything we are. We don't mind the genres. We are a supermegamix of everything we've heard and especially of how we have lived. The main influence is the life itself. Relationships between people, the state of society, nature...

Q. Make a list of 5 albums of all time…
Mission impossible! We've tried it.

Q. How do you feel playing live?
Jo: We have never played live! We have been asked to play in Denmark, Turkey, U.S.A., Belgium, Portugal though. And Imatra. (a small town here in Finland) Emoticon grin The situation in our lives doesn't make rehearsing and going on gigs possible. Life's too hectic for that, there's no time. And I have to say that as much as I enjoy watching and hearing good bands playing live, I don't have any urge for doing that myself. I am a hermit. 4ever. But you never know. Akira feels differently about playing live though, but that's because he has lost his touch with reality (of daily life). (Not joking.)


Q. How do you describe Flying Cape Experience sounds?
Jo: Layered, ethereal, dreamy, emotional, therapeutic, keen/dirge or how should I put it in english…that's what I first said our songs are like…weeping. Good for a heartbreak, comforting. Sometimes loud and noisy, but peaceful. Trying to find harmony from chaos. Trying to achieve some kind of satisfying balance. (=Just like living.)

Q: Tell us about the process of recording the songs ?
Jo: The recording process is actually very fast, in a way…We've got our own little home studio, so it's easy to record whenever we need to. Mainly it goes like this: I usually "get" the vocal melodies and lyrics from some dimension at the same time, it's like they channel through me. Then I record those, and I always have some kind of atmosphere and feelings about the song in my mind, and the theme. There's an idea of the composition and arrangement…Then I try to explain all that to my husband Akira. It can take time, it can take many crazy arrangements and experiments before we get to the point when I can say: YESSSS, that's what I meant! And cry my eyes out because of the fulfillment. It's crazy, it's fun, it feels like everything is in it's right place when it happens. And it doesn't always go like that. Akira puts his own vision to the songs, and I am very pleased with that. He comes up with ideas which raise the songs to a new level that I hadn't thought of. I appreciate and admire him and his visions. I am happy working with him. We make each other whole. Usually he plays the guitars, we both play synth&organ, and he makes the drums if there is some. I sing and also sometimes play guitar…in my self-taught way. You just have to find the right notes and tones and make some noise, right? Emoticon wink Find harmonies and make things fit together. I feel like if there's a strong vision, you'll be able to achieve what you want.

Q. Which new bands do you recommended?
The Virgance, Plasticstatic, Spökraket, The Neon Violets…they are not that new though, but deserve attention!

Q: Which band would you love to make a cover version of?
We actually have made one cover song. It was our collaboration, EP "8" with our El Vals del Conejo label mate & owner, our good friend , a portuguese artist Joaquim Barato. He covered our song "The cage" and we covered his "Rivers in the sky". That's a beautiful song, very powerful, emotional. The "8" EP was released through El Vals del Conejo and also through New-Zealander Active Listener Records.
http://elvalsdelconejo.bandcamp.com/album/8-split-ep
https://theactivelistener.bandcamp.com/album/joaquim-barato-flying-cape-experience-8-al015

Q: What´s the plans for future....
Now that "We're all gonna die" is ready and released we feel relieved. We are happy about letting go of the new album. We've been working on it a lot and for long. There's always some kind of catharsis I guess when letting go of something that you've put yourself into, letting go of something that has been a part of your life for a long time. We continue doing what we love, continue doing what ever kind of music we feel like. We don't plan things, things happen.