Glow In The Dark Music with Crash City Saints - An Interview 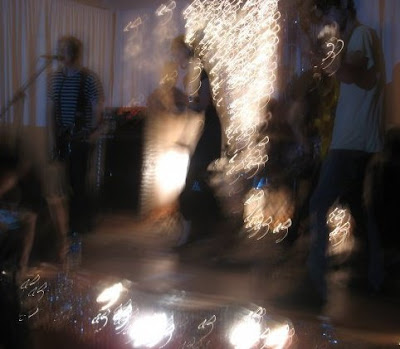 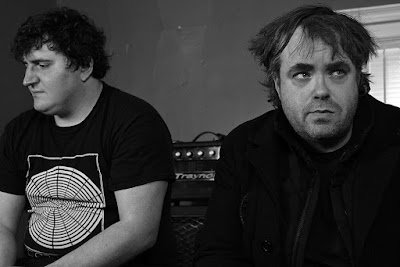 Q. When did Crash City Saints start, tell us about the history...
I wrote a fairly extensive bio (which already needs to be updated, ha) that can be found here: http://www.saintmarierecords.com/artists/crash-city-saints. There’s probably enough material at this point for a compelling, if maybe a little depressing, memoir. Short version: started this band back in the summer of 2002 with my brother Nathan. Two years later, we released the Nightdrive EP on Sonic Syrup. Spent the next five or so years going through a comical number of line-up changes, false starts, and crushing disappointments. Released the first full-length, Glow in the Dark Music, in 2010 on Quince. Then there was another line-up change. We began work on the follow-up to Glow in the Dark Music, which somehow took almost five years to finish. And now here we are. My brother is back in the band, which is nice. We’re planning a tour to support the new album, which is something I’ve never done, so that will be an adventure.

Q: Who are your influences?
In terms of sonics/production, Robin Guthrie, Brad Laner, Scott Cortez, Kevin Shields, Jack Dangers, and The Bomb Squad. As for arrangement/melody, a ton of pop songwriters from the 60s including Brian Wilson, Boyce and Hart, Carole King. The Ramones, Lou Reed, Spacemen 3 (and all the offshoot bands), The Jesus and Mary Chain, who all taught me you could do quite a lot with three chords. Sonic Youth made me completely rethink the possibilities of a guitar. The Madchester/baggy stuff that came out of Britain in the late 80s, early 90s; there’s just something about when you add jangly guitars to dance beats that’s magic.

Q. Make a list of 5 albums of all time…
Only five? Okay, I’ll try. Bear in mind this list changes daily for me. So right now, off the top of my head, in no particular order:
1. First, I’m gonna cheat a bit here by saying every album the Jesus and Mary Chain ever released (and yes, I’m including Munki)
2. Curve – Doppelgänger
3. Happy Mondays – Pills ‘n’ Thrills and Bellyaches
4. Denim – Back In Denim
5. Jesus Jones - Liquidizer

Q. How do you feel playing live?
In the interest of full disclosure, I HATE IT!! I’m shy and prone to stage fright, but you know, people keep asking us to do it, and I’m nothing if not a pushover, so again and again I agree, knowing that I will spend the entire time on stage shaking uncontrollably, sweating puddles, staring at my feet, and silently praying it will all be over soon. What can I say? I got into shoegaze because it’s the perfect music for introverts, which is exactly what I am, sometimes maybe to a fault. That said, the shows have thus far gone over well. People seem to enjoy themselves. So we must be doing something right.


Q: Tell us about the process of recording the songs?
It’s a lot like writing a book I suppose. You start with a first draft, then edit, re-edit, and keep adding, taking away, and changing parts until it’s close enough to how you initially imagined it that you can pretend you’re done with it (that old da Vinci chestnut about “no work of art ever being finished, only abandoned” rings especially true for me when it comes to song writing). Sometimes I start just on an acoustic guitar, then add other elements from there. Sometimes I begin with a noise loop, a drum break, or just a sound, then create a song out of that. It changes from song to song. One big difference in the process for the new album versus the first is that Glow in the Dark Music was a much more random collection of songs recorded at various times in different cities and states. The new album was conceived from the very beginning with a specific theme and each song reflects that theme. There is a cohesiveness to it that I think was lacking on the first album. Whether that’s a good thing or not, I guess time will tell.

Q. Which new bands do you recommended?
Ringo Deathstarr!!! They are like if a band was created in a laboratory based on the collective dna of every type of music I’ve ever loved. Easily my favorite group of the past ten years. Also enjoying Birdstriking, The War On Drugs, Seasurfer, Lightfoils, Diarrhea Planet (I know, I know… that name! But seriously, they’re great!). Brief Candles are possibly the best modern shoegaze band in the biz; I’ve been lucky enough to get to see them play numerous times at Kalamashoegazer, and they are one of those increasingly rare bands that sound just as good live as they do in the studio. Oh, and while Swervedriver are not a new band, “I Wasn’t Born to Lose You” is probably my favorite album of 2015. They still got it!

Q: Which band would you love to make a cover version of?
Every year here in my hometown of Kalamazoo, MI we have a music festival called “Kalamashoegazer”. For the past eight or so years we’ve been playing there, it’s become a tradition for us to each year do a cover of a shoegaze classic. Last year we played Chapterhouse’s “Falling Down” which is a song I’ve wanted to tackle for a long time. It turned out good enough that I’m considering recording a version. One day I would love to do a cover of a song called “Ride” by Parchman, which for my money is the pinnacle of the whole late 80s/early 90s indie dance craze. It’s a song that deserves to be rediscovered.

Q: What´s the plans for future....
Releasing the new album, come hell or high water. Then a modest tour. Maybe we can finally make a t-shirt. That would be a personal milestone. Then onto album number three, which I’ve already been working on for the past year. Beyond that, not really sure. I’ve made too many bold proclamations in prior years about the future of Crash City Saints just to end up with egg on my face. Better to take things one day at a time. What I can say for certain is, however many years from now, no matter the changing trends in music, I’ll still be making noise, putting it out there on the World Wide Web, and hoping it connects with somebody. There’s really not much else on this planet that interests me.

Q: Any parting words?
Eat healthy, drink plenty of water, and listen to more shoegaze. Thank you for listening.
*
*
*
Thanks