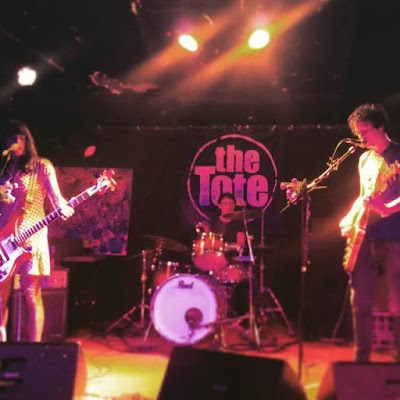 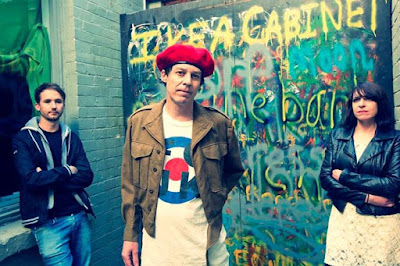 1. When did Jukai Forest start, tell us about the history….
Mel: With a few of Matt’s songs after he arrived from New Zealand in 2012, his pillarbox red Rickenbacker and vox, my dan electro bass and a drum machine. We recorded a few songs as ‘Westall 66’ then recruited a drummer. We went through 6 drummers… then found Ritchie at our local a year ago via Matt’s ‘drumdar’. That’s when things really started coming together for us.

Matt: I moved to Melbourne from New Zealand in 2012 and Mel and I started writing songs with a 1960s NDK 4 track

Ritchie: I started in April 2014 with Jukai Forest, been playing in bands since high school

Ritchie: As a drummer I have always tried to keep an open mind with as many styles as possible to help me become more rounded musically but for Jukai Forest main influences The Stone Roses, Ride, Tame Impala, Nirvana ,Pavement.

4. How do you feel playing live?
Mel: Exciting but with a nervous tension/expectation and I love that combination

Ritchie: Playing on stage is the best feeling in the world!

5. How do you describe Jukai Forest sounds?
Mel: Well. I have a list of bands people have compared us to. It’s up to about 30 bands. I think that says it is hard to pigeonhole us. Someone said we’re like early Velvet Underground and the Go-Betweens and The Cure and I’m OK with that

Ritchie: Indie Rock, with a hint of Punk and Dream pop thrown in


6. Tell us about the process of recording the songs?
Mel: We’ve recorded at 5 or 6 different places including studios like HeadGap, and at home with a well know and awesome producer…(the South Meringue ep) My favourite is to play the songs live then overdub vocals and guitar parts

Ritchie: Its usually pretty quick, a live take then overdubs over the top

7. Which new bands do you recommend?
Mel: I am loving Fat White Family and … random stuff

Ritchie: none in particular, just go out in Melbourne's' northern suburbs and you'll be sure to find some quality bands!

8. Which band would you like to make a cover version of?
Mel: Once we did a cover of Wire – Heartbeat and it made my heart beat

Matt: Don’t play covers. Not ruling it out but we are constantly writing new songs so don’t have time

9. What’s the plan for the future:
Mel: We have enough songs to record a double album… ha. Plus we hope to tour the USA next year and play with Hamish Kilgour in Brooklyn (he doesn’t know this yet but we played with him in Melbourne this year and he was ace). Also we are playing a with great line up of bands at the Beetle Bar in Brisbane on 31 July (our first interstate gig)

Ritchie: Playing lots of Shows in Melbourne, Hopefully an East coast tour next year sometime and get an EP or 2 recorded for promotion and getting our sound out to as many people as possible!

10. Any parting words?
Mel: It’s tricky to make your way in this new world as an unsigned band where some people love your live shows and it costs money to record but the labels go with the scenester bands. I’d just say to anyone who has made the effort to come see us play or listen to our songs, THANK YOU

Matt: Have a good time all the time

Ritchie: Thanks for having us! legends!
*
*
*
Thanks