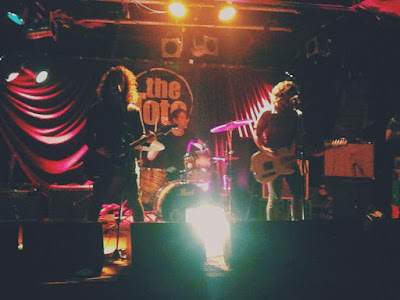 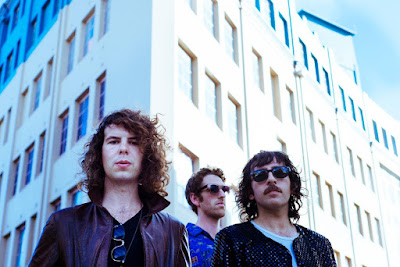 Q. When did Pretty City started, tell us about the history...
Pretty City started in late 2012. Hugh, our guitarist, lead singer and main songwriter was writing some new shoegaze tracks that didn't fit with his band at the time. Hugh had known our lead guitarist, Johnny from playing in bands around Melbourne, and Hugh and I had known each other for ages too. We all had a jam to work on Hugh's songs and launched into gigging straight away. I think we had two rehearsals then played our first show.

Q: Who are your influences?
My biggest influence is probably Pink Floyd, but I've also drawn a lot from Queen, Muse, Black Sabbath as well as Funk bands like Parliament Funkadelic and The Bar Kays. Hugh absolutely loves Cream, but has been influenced by The Brian Jonestown Massacre, The Rolling Stones, and also bands such as The Horrors, The Cure, and even a bit of Jango Rhineheart. Johnny's our energy and loves bands like Spiderbait, You Am I as well as classic bands like The Stones and the Beatles.

Q. Make a list of 5 albuns of all time…
I'm going to try and speak for everyone and say that a top 5 might look something like this in no particular order:
OK Computer - Radiohead,
Exile on Main Street - The Stones,
Disreili Gears - Cream,
Disintegration - The Cure.

This could change on a daily basis and I'd have to mention Pink Floyd's entire back catalogue and my not so secret obsession with Van Halen.


Q. How do you feel playing live?
We absolutely love playing live. It's really our favourite thing in the world. We started as a jam band and on stage is where we are most comfortable.

Q: Tell us about the process of recording the songs ?
We usually workshop songs as a band together for a few rehearsals. We then play the new songs live a bunch of times. Then, before we go into the studio to records we record demos and make sure that we have all parts written and have the structures right. Then we get into the studio and punch out the tracks live with drums and guitars. Then we add any layers and finish off with vocals bvs and any percussion.

Q. Which new bands do you recommended?
We really love a local Melbourne band we play with called Fierce Mild. They have a similar aesthetic to us but are more on the prog end of the scale. Another great local band are called My Piranha. They are straight up party punk rock that is so catchy and awesome. In terms of bigger acts we love Tame Impala and Royal Blood.

Q: Which band would you love to made a cover version of?
Everyone's going to kill me for saying this, but I'd really like to cover ABBA songs. They're so catchy!

Q: What´s the plans for future....
We've got an album recorded and mixed, so we'll be releasing that later in the year. We're just pumped to be playing more shows, in more places. Hopefully we can get over to South America at some stage.

Q: Any parting words?
Thanks heaps for reaching out to us and for listening to the songs, we massively appreciate it.
*
*
*
Thanks