Project The Love with Blurry Mountain 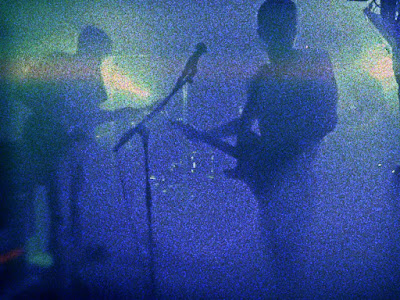 Q. When did Blurry Mountain started, tell us about the history...
Jérem : Julien & I met on the Internet a few years ago and decided to start a new psych act without knowing exactly what we wanted to play. I loved the tracks he had recorded alone and we had exactly the same influences (mainly shoegaze and drone). We started to write music together but as we are both guitarists there was a lack of something to go further. Then we asked Paul, who's been a friend of mine for years, to join us on drums. We then found Alex, the bass player, on the Internet. He also was fond of stoner and shoegaze...

Q: Who are your influences?
Jérem : We started with having all the new wave of psych rock on mind. Mainly Spacemen 3, Loop, The Black Angels, The Warlocks, and Dead Meadow. Personally Some more recent bands have left their mark on me the last few years: The Oscillation, The December Sound, Indian Jewelry, Psychic Ills, The Blue Angel Lounge, Dead Rabbits, Lumerians... I'd say we also have a strong post-punk and indie rock influence. Moreover, we all listen to all kinds of music, from reggae, hip-hop and soul to electronic music...

Q. How do you feel playing live?
Alexis : It depends on which song we play..stiff a little bit, I need to relax...

Q. How do you describe Blurry Mountain sounds?
Jérém : We try to have an original mood by combining elements from neo-psychedelia, stoner and drone. I'd say drums often are inspired by post-punk rather than classic psychedelia.

Alexis : a combination between new psych, shoegaze, stoner and post punk indeed. It has to do with what we listen and want to play but it comes naturally.

Q: Tell us about the process of recording the songs ?
Jérém : More than recording, here's our process to compose: we all compose together. Someone starts bringing pattern and we all build on this, while the song is taking shape little by little.

Alexis : not exactly new but Whirr, Nothing, Be forest and Oeil are bands playing on repeat for several months now, Julien has also an other pretty interesting band called Dead Sea

Q: Which band would you love to made a cover version of?
Jérém : I'd love to make a psych version of a film soundtrack song, or of a reggae song for example...

Alexis : We covered Mary Anne from Spacemen 3 live once with a friend on tambourine, it could be fun to play it again.

Q: What´s the plans for future....
Jérém : Try to make an album and play live more and more, maybe by supporting bands we love first.

Alexis : We had a break to wait for Julien to come back from what he had to do. We started getting back to play recently.

Q: Any parting words?
Alexis : Thank you for giving us your attention, love and rock, peace
*
*
*
Thanks
Postado por TBTCI às 09:16