For Ex Lovers with Debris Slide - An Interview 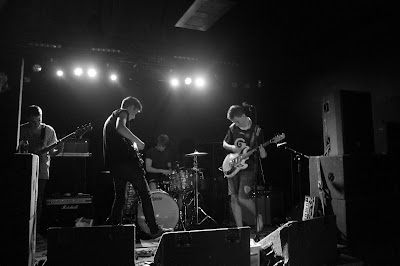 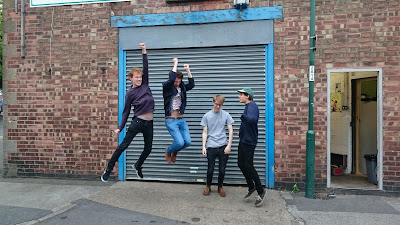 Q. When did Debris Slide started, tell us about the history...
Myself and Harry (who originally played the bass) formed the band back in 2012, we living in the same flat together during our first year at university and both happened to have really similar tastes. I eventually managed to convince Harry to start learning bass so we started practicing in our kitchen together much to the annoyance of our other flat mates, recording the four songs that made up our first EP, we had absolutely no idea how to record anything and were both terrible at our instruments, no one would give us a gig cos it just sounded like an absolute mess. Then we found Luke online to play drums for us and eventually played our first show in 2013 which again was a mess. But eventually people began taking us a little bit more seriously as we carried on writing better songs and playing more shows. Then Harry left the band last year and we got our mate Pete who I knew from just going to DIY shows with to play bass and Jordie who had wanted to join for ages after his old band Pylons split up to join as an additional guitarist, after we recorded our debut record as a three piece. And now we’ve just released our debut album ‘Araido’ on Fluff last month and our recording our second record ‘Calamity Dank’ this weekend, it’s much more than we could have ever expected.

Q: Who are your influences?
It’d be kind of daft not to say Pavement considering we’re named after a Pavement song. When we started I’d always drawn a lot from really abrasive noise pop bands like Black Tambourine, The Pains of Being Pure at Heart, Vivian Girls, loud bands that are super fun. But now between the four of us there isn’t really a lot collectively that we draw influence on, Pete is a big screamo fan, Luke has his own house label that he does, Jordie listens to a lot of mid nineties American indie and emo and I just really love pop music whether that be Taylor Swift or My Bloody Valentine; we all love a good bluetooth banger though.The record we’re about to record draws a lot more on delicate artists like Jessica Bailiff and Grouper. Basically just wanna be a Swirlies tribute band

Q. Make a list of 5 albuns of all time…
Weezer - Pinkerton
Los Campesinos! - We Are Beautiful, We Are Doomed
The Microphones - The Glow Pt. 2
Pavement - Crooked Rain, Crooked Rain
Beach House - Devotion

Q. How do you feel playing live?
Playing live is for the most part great, especially when we’ve got to play with so many bands that we really like and in Nottingham now we’re at stage where we know what promoters we want to play shows for. We’re also really luck in Nottingham that we’ve got some really great DIY spaces (JT Soar, Stuck on a Name, Chameleon Arts Cafe), otherwise with the company that owns most of the rest of the venues in the city it’s hard to to get show with them unless they’re financially invested in your band. We were very naive starting out and ended up playing some awful club nights to no one which wasn’t a great experience so it’s better now. We love just trying to sound as big as possible in a room to make everything sound claustrophobic and intense, we often play shows that end up with blood being shed, real punk haha

Q. How do you describe Debris Slide sounds?
It’s for you to decide that

Q: Tell us about the process of recording the songs ?
Usually I’ll come with an idea on guitar bring that to practice and we’ll bash that out and work with it until we’ve got something that we feel is good enough

Q. Which new bands do you recommended?
Our friends The Blue Period are great, released a really beautiful EP at the end of last year. At the moment I’ve pretty much just got ‘Aquarius’ by Tinashe on repeat, that and the debut Pinkshinyultrablast record which I’d say is probably the best shoegaze record of the past five years or so.

Q: Which band would you love to made a cover version of?
Me and Jordie are massive Weezer fans and we got asked to do a cover set of Weezer songs for a festival last year which was one of the most fun things we’ve ever done as a band, people were actually dancing and stuff. Other than that we have flirted with the idea of covering ‘Heaven’ by DJ Sammy.

Q: What´s the plans for future....
We’re recording six songs this weekend with the legend that is Phil Booth at JT Soar and we’re hoping we’ll get a vinyl release for that again. Other than that we’ll probably just carry on as we are playing shows locally cos we can’t really afford to go outside of Nottingham at the moment

Q: Any parting words?
We all have other projects we're working on

Luke has got a 12" of his house tracks later this year, his last EP is all bangers https://strattontrax.bandcamp.com/album/303s-earache

And Jordie's other band released a really great dreamo record a couple of years back thats well worth checking out https://darjeeling.bandcamp.com/album/harlequin