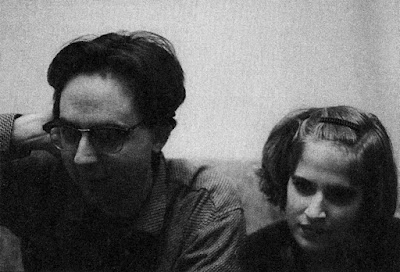 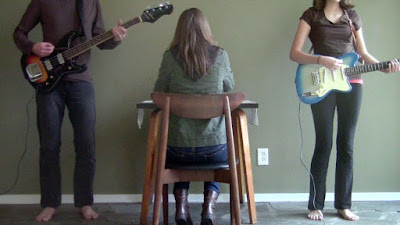 Q. When did Should started, tell us about the history...
A: I've been recording music since the mid 1980s. In the late 80s the name I started using was shiFt. That music was much more electronic and heavily influenced by labels such as 4AD and Factory. Then in the early 90s I heard bands like My Bloody Valentine, Slowdive, Pale Saints, and Medicine and I quite liked the melding of melodic songs with the creative use of sound and noise. But it wasn't until I heard the Lilys "In the Presence of Nothing" that it occurred to me that it might be something that I could do. The barrier was that I didn't own or know how to play a guitar. So I involved my brother Eric (who played guitar in his own band) and Tanya (who has a wonderful voice). The songs on our first CD, A Folding Sieve, were constructed using short guitar loops sampled from recordings of my brother from his band and from recordings I did when I'd borrow a guitar and record short guitar phrases onto cassette tape.

By the time of our second CD, Feed Like Fishes, we had changed our name to Should and I had learned to play guitar well enough that sampled guitar loops weren’t as necessary. This album was the second release of Words On Music, the label Eric and I have run for the last 17 years. After that there was a long hiatus as my daughters were born, and I was starting my real career as a university professor. But I eventually got back to recording, facilitated mostly by the purchase of the music software Logic and the switch to digital recording instead of 8-track reel-to-reel (which is quite limiting compositionally). It took a while to figure out what I wanted to record, but it eventually coalesced into the songs for the album Like A Fire Without Sound. The songs for The Great Pretend (our latest album from last year) came more quickly as my songwriting abilities and proficiency with Logic have improved. As Tanya and I live in different states, for the last two albums her vocals were recorded last, either by her visiting me in Baltimore or me taking a minimal studio to her house in Ohio.

Q: Who are your influences?
A: I listen to a lot of music of quite a variety of styles. But I am most inspired by artists who take chances and forge their own unique sound. Brian Eno, Wire, Low, Prinzhorn Dance School, and Disco Inferno are examples.

Q. Make a list of 5 albums of all time…
A: This is impossible. Instead I am going to take the opportunity to champion two albums that I really love that are not nearly as well known as they should be: Trouble Books’ "Concatenating Fields" and "Love at Dusk," which unfortunately were released only on vinyl in limited quantities. But you can listen to them on their website (http://barkandhiss.com/trblbks).

Q. How do you feel playing live?
A: I've never really been interested in playing live. I've always been more interested in the art of the recorded song more than the art of musical performance. Around the time A Folding Sieve was released (1995) we played live three times, once as a trio and twice just Tanya and myself. The third and last time we played live was for an album release show for bands on the ND and Sedimental labels (this was the release show for A Folding Sieve, the debut album for Stars of the Lid, and a couple of other releases).

Q. How do you describe Should sounds?
A: I never know how to do this. Descriptions of sound say more about the person describing the sound than the actual sound itself. One's view of sound and music and the language used to describe it is shaped by what one has heard before. Unless two people have that experience and language in common, descriptions are bound to be problematic. I think there is a saying something like “writing about music is like dancing about architecture.”


Q: Tell us about the process of recording the songs?
A: I could go on forever because I am very interested in process and the artistic use of limitations. One thing that may surprise people is that I've never owned a guitar amp or used a guitar amp to record my guitar. I only have one guitar pedal, which I haven't used in 15 years. Nowadays I use Logic to get the sounds I want, but this was even true back when we recorded on 8-track (though I did use a SansAmp rack unit for Feed Like Fishes). People occasionally ask what guitars I use, and I don't even know (I only have one and it says Gibson on it). It's not what you have it's what you do with it. Necessity is the mother of invention. When setting off to record a new album I usually have some set of rules to follow. For our last album, the three main rules were 1) Don't try to write a particular type of song. Instead let the song go where it naturally goes even if it doesn't necessarily fit what I think a Should song should be. 2) Start the next song with all the settings/sounds from the previous written song. Things can be changed as the song progresses, but I first had to try to make the song work with what I ended up using on the last song. 3) Use electric piano. There is always one final rule: don't always follow the rules. We record about twice as many songs as make the album. The reason most songs fail is not being able to find the right vocals/melody to make the song work.

Q. Which new bands do you recommend?
A: Here's some bands with albums in the last 5 years that I am fond of (when you get older, things are "new" for a much longer time): Trouble Books, Lotus Plaza, Youth Lagoon, No Joy, The National, Flyying Colours, Black Twig, Viet Cong, Motorama, Ringo Deathstar, Savages, and Prinzhorn Dance School.

Q: Which bands would you love to make a cover version of?
A: I enjoy recording covers. We've covered The Jean Paul Sartre Experience (who have a boxset reissue later this year that I'm excited about), The Wedding Present, 18th Dye, Disco Inferno, and Over the Atlantic. As fans, I think we tend to do covers too faithfully, so I'm trying to move away from that for future covers.

Q: What's the plan for the future....
A: I don't know when the next album will be. It will probably be awhile. I have written any songs yet. I've been working on other projects including my solo ambient/electro-acoustic music under the moniker M. Ostermeier. My album Still came out earlier this year on Tench (http://www.tenchrec.com/TCH07.html).