Nothing Forbids You with Heavïness - An Interview 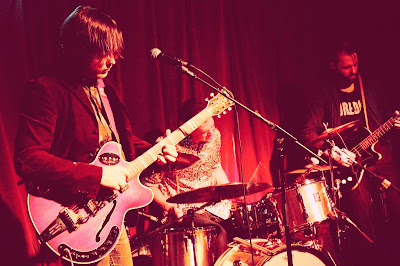 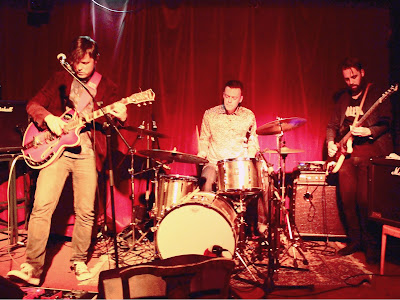 Q. When did Heaviness started, tell us about the history...
Me end Daniel met in high school when I drafted him for a indie band I was in at the time. We soon started a new band called Montage with progressive guitarist Mikael Weichbrodt, who later left to join Robert Fripp & The League of Crafty Guitarists and form Berlin Guitar Ensemble.
Daniel lived in this worn down old villa with his dad, and I practically moved in there after high school. That house was like an ongoing party, with people turning up and crashing in every corner.
Daniel and I played with other guitarists over the years but never got the sound we wanted. We began to play as a duo in 2004, I think. I got an electric guitar and some cheap pedals and set about trying to produce the sounds I was hearing in my head when I wrote the songs. There were no other bands around at the time with the –ness ending to their name, so we thought Heaviness sounded new and was descriptive of both the sound we were after and the melancholia of the songs themselves.

Q: Who are your influences?
As a young teen I listened to all the shoegazebands of the first wave, at least the ones I came across. After a dive into psychedelia I returned to gaze to fill in the blanks. I was somewhat a record collector at the time. I was into all the 4AD, Creation and Sarah records bands, but also the post-punk bands and later Slumberland and Clairecords bands.

Q. How do you feel playing live?
It’s just the best experience in the world, it’s ecstasy. I’m usually all blissed out during our gigs.

Q. How do you describe Heaviness sounds?
A lot of music is just trying to portray really simplified feelings and topics, but I never had feelings like that. The songs I write are more about transition and trancending circumbstances and boudaries. They are incantations of sorts.

The sound itself is perhaps a bit like being inside a mist, or some other unreal place. A din, engulfing the listener, where sounds and harmonies melt and warp. Like some magic with the power to transform those who need transformation.

I’d always written the songs on guitar, but I never had a single lesson or anyone instructing me how to play. So it all sounded different from the get go, because I wasn’t playing like other guitarists at all. I taught myself on a 12-string, and so I always wanted that kind of orchestrated sound. I don’t use alternate tunings at all. It’s all strange chords. I don’t even use that many effects really, it’s mostly the chord’s harmonies and dissonances making the wobbling and strangeness. Also, when I was younger I was all confused about rhythms, and often wrote songs with unusual and shifting time signatures. I think those anomalies is what caught the interest of musicians much more knowledgeable about music than myself.


Q: Tell us about the process of recording the songs ?
These days I have a small studio, Miasma, where I record all the guitars and vocals. I usually introduce a song to Daniel, we rehearse it and then record the drums. After that I finish the song in my studio. Pål, our new bassist, has recorded some of the bass parts afterwards. The bass is often the last instrument to be set. It dispels some of the ambiguity of the guitar and the melodies.

Q. Which new bands do you recommended?
I’d like to recommend my friends Stumm/Risberg. They play this kind of brooding atmospheric industrial synth. There’s too much of a bulkhead between genres these days, but they went out on a limb and let me produce their upcoming single.
https://soundcloud.com/s-t-u-m-m-r-i-s-b-e-r-g/stumm-risberg-rise-and-fall-master141128

I'd really like to recommend our friend Goblin's project called Valsaland.

Q: Which band would you love to made a cover version of?
I have this sort of love/hate for Nico, and I’d like to do a cover that reflects that.

Q: What´s the plans for future....
We’re working on a new record. After that we’re gonna try to go out on tour.

Q: Any parting words?
I’ve noticed quite a bit of interest in Heavïness coming from South America, and it makes me very glad! I really respect and take alot of inspiration from South American music, both old and new. It is really the home of harmonically and rhythmically complex and interesting modes in pop music. I hope to be able to go over there some time to play shows.
*
*
*
Thanks